A couple weeks ago, a few friends and I went to see the play “Memphis”.  If you are keeping track (which I’m sure you are), this means I only have four more shows to see in order to cross this item off my “26 Things” list.  Any recommendations?  (No, not planning on seeing “Spiderman”.) 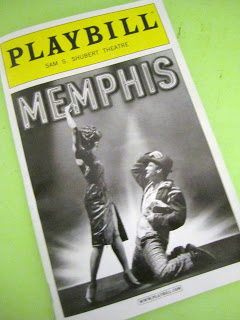 “Memphis” won the 2010 Tony Award for Best Musical and it is easy to see why.  It was amazing.  The story takes place in Memphis (shocker) in the 1950s, when DJs on “white radio stations” started to play “black music.”  The songs are awesome and the cast was incredibly talented, especially the male lead, “Huey” (Chad Kimball) and the female lead, “Felicia” (Montego Glover), both of whom were nominated for Tonys for their respective parts.  We ended up seeing Montego walking out of the theater so we bombarded her.

After the play, Chris, Kater, and I walked across the alley to Junior’s because Chris wanted a piece of cheesecake.  Kater and I hadn’t heard of this “New York Tradition”, but who are we to deny ourselves cheesecake?  I ordered a peanut butter cup cupcake and a ridiculously large slice of devil food cheesecake (four days’ worth) and told the cashier that I did not need a bag.  He told me that it was easier *with* a bag and I said that I really didn’t need one since I was just walking a little further.  He insisted again that it was easier to just give me the bag and I gave up on trying to save the world and accepted my treats anyway.

The funny part is that when I got home, I saw the same bag on the living room floor that indicated my roommate had also gotten a Junior’s treat earlier that day.  I thought it was probably a sign of some sort that I hadn’t heard of Junior’s before that day and my roommate ended up getting it the same day.  A sign of what, I’m not sure.