It is really necessary to get out of the city in the summer once in a while as I mentioned before in my Hahhhhmptons post, especially when it is as consistently hot (read: sweaty and gross) as it has been the past few weeks.  Luckily, for those of us who still need to be in the city during the week, there are lots of fun outdoor events to reward you for sticking it out in the hot hot concrete jungle.  Two of these events are Central Park’s Summer Stage and the HBO Bryant Park Summer Film Festival.  Last Monday I did the former, this Monday (today) I did the latter.

Summer Stage has been running for 26 years and this summer over 100 shows are being put on in 18 different parks around Manhattan and the boroughs.  Most of the shows are free, but for some of them tickets are sold, and the money from those shows helps fund the free performances.  Emily had gotten tickets to the last Monday’s show and invited Sam, Gillian, and me.  I hadn’t actually heard of the performer, Lykke Li, when I accepted the invite, but I did my homework and studied over the weekend so that I wouldn’t feel like too much of a goober at the show.

Lykke Li is a Swedish singer and songwriter who I can best describe as Indie Pop and best compare to Florence & the Machine.  After a pitcher of beer, fried pickles, Philly cheesesteak eggrolls, and boneless chicken wings, and NO Justin Timberlake sighting (boo) at Southern Hospitality, the ladies and I wandered into the park and followed the music to enter the concert venue.  It was hipster central with a few randos scattered in who just wanted to hear the music, including a couple next to me with a combined age of 160.  Even though I clearly didn’t know the majority of Lykke Li’s music, it was really enjoyable and she is an incredible performer.  You should also check out her Pandora station.  Every song on it is amazing.  I’m adding Lykke into my rotation and finally giving Bruce and Taylor a little bit of a break this summer. 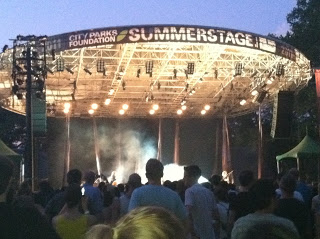 “Sadness is a Blessing”

This summer, the HBO Film Festival has featured such classics as “One Flew Over the Cuckoo’s Nest”, “Gentlemen Prefer Blondes”, and “Easy Rider.”  Today, Kat, Emily and I went to Bryant Park to watch “Airplane” on the lawn of the park with hundreds of other people.  The lawn opens up at 5 and fills up pretty quickly so you have to be kind of aggressive with how much space you take up since you will end up with half that amount by the time the movie starts.  Our show started a little after 8:30 and began with a few previews and a Looney Tunes cartoon.  We were a little nervous about being able to hear the movie well, but once it started, everyone quieted down (with the exception of the obnoxious drunk girl in front of us every few minutes) and we could hear every perfectly cheesy line.

In case you want to check it out, next Monday, August 15th, is “High Sierra” and Monday, August 22nd is “Dirty Harry”.  Let me know if you have found other cool events / festivals that I should go to before the summer ends!