If you told fourteen-year-old Erin that she would attend two free intimate Justin Timberlake concerts in one week and end up talking to some of his buddies about him, she probably wouldn’t have believed you.  She might have posted a section about it on her *N Sync website (which is still online and which you will NEVER find – go ahead, try) and stared at her four closet doors plastered with posters of him and the other *N Sync members for hours, trying to imagine what it would be like, if ever the moment were to  actually come.  I always joke that the reason I always have my camera with me is just in case I ever see J. Timbs.  It’s mostly a joke, but come on, who *doesn’t* love Justin?  He is successful in everything he attempts, really does seem like someone you could totally hang out with, and always looks like he’s loving what he’s doing.

Night 1 – On Wednesday, Kat and I went to the Harry Potter Exhibition in the Discovery Museum in Times Square (don’t worry, I will write about that at some time too – and yes, it is also something fourteen-year-old Erin would have loved).  I had seen a single tweet from @jtimberlake earlier that day: “NYC!!! Wanna check out some live music tonight?? Meet me and @freesol at 45th & 9th at 11pm. #bbqnyc#youdontwanttomissthis“.  Hmmm.  Clearly this meant Justin was going to be at Southern Hospitality, which is on my way home from Times Square, so clearly I was going to stop by, just to see what was up.  I told Kat about it and said, “You know, there probably will be a huge line, so we probably won’t get in, but I’ll feel bad if I don’t even walk by.”  And because she is awesome, Kat decided to come with.

We walked into Southern Hospitality and there was actually not really a crowd beyond the regular dinner and drinks crew, but there were people setting up the stage.  We decided to eat dinner (read:  delicious fried appetizers) and then return to the bar afterward to wait it out.  The table next to us asked the waitress if Justin was going to be there and she said “Well I’m not really supposed to say anything”.  Post-dinner, we wandered back over to the bar and stood for about two hours waiting for something to happen.  We caught up on Words with Friends games, played the Celebrity game for 45 minutes, and chatted with gorilla juiceheads and (other) former teenyboppers next to us.  Kat and I were standing next to an empty table which the busboys removed for five minutes and then put back.  We thought it was strange that someone would be sitting during the concert but we decided to be extra nice so they wouldn’t ask us to move.

Turns out we were in the right place at the right time.  We started talking to the people at the table once they came and it turned out they worked for Justin’s tequila, 901 (the area code of Memphis).  I feel bad calling out who specifically they were because they were so nice to us, but suffice it to say, they were pretty close with Justin.  They gave us samples of the tequila to try and Kat and I both agreed it was really good – and this is coming from a girl who only drinks chilled Patron and one who doesn’t drink tequila unless I make her.  They also gave us tickets for a show the following night at Irving Plaza.

The show was incredible.  FreeSol is “the it band from Memphis” and are on Justin’s record label.  He describes them as “a fusion of rock, hip-hop, rhythm and blues, and soul,” and I would just translate that as “awesome.”  JT came out and played every song with them and played some of his own songs including a beautiful slowed-down version of “What Goes Around Comes Around” which he announced as “the closest I ever got to a country song.”

For the first few songs, Kat and I couldn’t see the band or Justin at all, but then one of the guys we had been talking to at the table graciously got off the chair he was standing on and let us both get up and I could not have been happier.  It was a great view, a great show, and a great experience.  We later found out that the Kardashian sisters, Amanda Seyfried, and some other celebs were there, but I hadn’t been able to take my eyes of Justin, so I didn’t see signs of them at all. 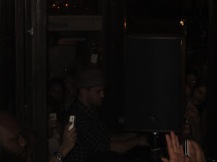 Night Two – Kat was unfortunately unable to attend the second concert but I was able to gather some of my frousins, friends, and coworkers to go and we all went to Brother Jimmy’s beforehand.  When we left Bro Jim’s, the line from Irving Plaza was way far around the corner, since it was first-come, first-serve.  Luckily, since we had tickets, we got to go to a different line just for ticketholders.  I hadn’t been sure about how many tickets were passed out so I had originally been kind of nervous that we still wouldn’t get in, but there were only maybe thirty people ahead of us.

We finally got in around 9:30, even though the show was supposed to start at 9:01 (it was a 901 Silver Tequila party of course) and Emily and Mike somehow got VIP bracelets.  Emmy Poo gave me hers because she is wonderful, and Mike and I wandered up to the VIP area where we were supposed to be able to get free tequila drinks.  I waited for about twenty minutes but the girls around me at the bar were way prettier than I was so I knew it would take a lot longer for me to get anything.  I left Mike and went back downstairs to get a prime spot on the floor.  We ended up in about the fourth row for this show, which was definitely okay by me.  This was also way easier to see since the stage was raised.

The second night’s set was a lot longer than the previous night’s.  Justin played his almost country song again, along with “Cry Me A River”, “Dead and Gone,” and “Like I Love You” – about which he said “I am *way* too old to play this song now,” which made everyone laugh.  I also loved it when JT called out, “For the record, I’m not trying to be a serious actor, you ****ers…I was just in two romantic comedies this year.”

Make sure to check out the video for FreeSol’s “Hoodies On, Hats Low,” their single which was released in August.  It is pretty awesome.