It is currently NY Fashion Week, which is why Fashion’s Night Out was Thursday. This event happens twice a year, in September, to showcase designers’ upcoming Spring collections, and in February, to showcase the upcoming Fall collections. CK challenged me to go to a NY Fashion Week Show as part of my 28 Things, and she had specified that it couldn’t be part of Fashion’s Night Out and had to be a real show.

I wasn’t really sure how to go about doing this challenge, since from what I had heard, only fashion insiders could get tickets to these things. I am certainly far from a fashion insider, although my nine-year-old self was pretty fashion forward as seen in this post. I looked to see if I could get tickets from my AmEx card and there were VIP packages available, but they were all sold out and pretty expensive anyway. I decided to check out Craigslist and came across someone who used to be in the industry who was selling some of her invitations. I picked out a show on Friday night so that I wouldn’t have to miss work and chose a lesser known designer so I didn’t have to shell out $200. I hadn’t heard of the designer, Parkchoonmoo, but I did look up a bit of her work and was very curious as to what she would present at Fashion Week.

I didn’t think that I was going to fit in with the crowd, especially being by myself, it was kind of like if I were going to a Giants game alone. (Which makes me wonder, if I wouldn’t fit in to either of those events at opposite sides of the spectrum, where *would* I fit in?) I didn’t know what to wear so I just grabbed the most expensive thing in my closet which was a black strapless dress I had worn to a wedding last year. I dressed it down with my accessories and was on my way to Lincoln Center, where there were people hanging out around the fountain and a huge screen showing the fashion shows from the week. 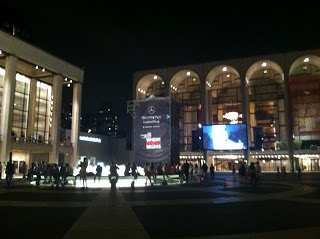 I wasn’t completely sure that I would get into the show because the woman who I purchased the ticket from had a distinctly Asian name and I thought someone might ask me for ID or call me out because I look Irish and Polish. But I also figured that these invites got passed around quite often and the people organizing the show wouldn’t want an empty audience. I got in without a problem and saw my ticket said “Studio Priority Standing” so I didn’t try to find a seat, although some empty seats were filled by the standers right before the show started.

The show itself was pretty short, maybe about 10-15 minutes. The lights were bright, the models were thin, the music was dramatic, just as you’ve seen on TV. The clothing in this particular show was boxy and industrial for the most part, although there were a few outfits that were a mix of industrial and feminine. Nothing stood out too much except in the middle of the show when a few models walked out with the netting around their faces from the invite. The colors were mostly white and black with just a few pops of color mixed in. After the show, the designer walked out and bowed, and everyone clapped and left. 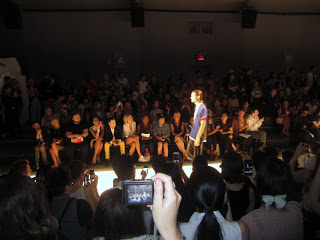 This event was definitely something that I wouldn’t have thought to do on my own without the list, so I was happy for the suggestion and that it worked out. I probably wouldn’t go again unless I got free tickets somehow and was able to go with someone, but I don’t think that’s very likely anytime soon. Of course, when my acting and/or singing career takes off, the designers will be BEGGING me to sit in the front row.