Hi friends! I have returned from my autumn adventure in Europe. I was visiting my friend Davesh who moved to Amsterdam in August (as you may remember). It was such a good trip! The city of Amsterdam is AWESOME. If you can imagine this, I would actually consider living there if NYC ever decided that it was finished with me. And if I lived there, I would absolutely want to live on a houseboat. (You know how much I love being on the water.

I think the part I enjoyed the most about the city was that it was just so darn cute. There are old skinny row homes everywhere with all different shaped gables. Instead of busy intersections with lots of streets meeting up, there are cute little tree-lined canals. And there are bicycles everywhere you look. I even rented one the last few days (after not riding one since last year and before then, since middle school).

I spent most of the mornings in cute little cafes, eating banana-bacon pancakes, appletarts, and sipping cappuccino. Then I would wander around the city, doing walking tours from the amazing Rick Steves guidebook, stopping by shops, going into museums, and people-watching and reading in the squares. 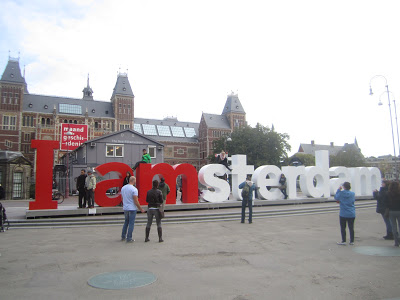 In the evenings, Davesh and I would grab dinner and meet up with his friends, including once at a Dutch trivia night. Even though we didn’t know the language and needed the questions to be translated by the rest of our team, we got third place out of about twenty teams (perhaps because I dominated, per usual, in the music round).We also went to a few bars and clubs and attended the first night of the Amsterdam Dance Festival right before my flight out.

My favorite thing we did was take Davesh’s and Nick’s boat out on Sunday. Earlier that day, the boat had been almost underwater because it rains A LOT over there. But the boat was drained and we took a wonderful journey through town that afternoon. We all took turns steering (although I only wanted to for a few minutes) and only crashed once, into a giant tour boat that probably had sixty people aboard. I definitely thought for about five hectic seconds that we were going to capsize but we made it through and were able to laugh hysterically about it for the next hour or so.