Before we went to Italy last month, everyone kept raving about the gelato. Our frousin Kara told us to eat it twice a day. We didn’t quite follow Kara’s rules to a tee, but we did eat a sufficient amount. Our first night in Rome, after our overnight flights during which no one slept and a marathon day to avoid jetlag, we wanted to treat ourselves with our first gelato. We asked the desk guy at our hotel where we could find gelato around there and he suggested a place ten minutes away. At that point we were so tired that we couldn’t fathom walking even just ten minutes. So the desk guy told us that there was a place on the corner as well, although indicating that it wasn’t as good as the other place. A family joke about the conversation is that we were all shouting, “We don’t care what it tastes like! We just need gelato! NOW!”

But gelato wasn’t the only sweet treat we enjoyed. Here are the top five in no particular order, including some gelato places that stood out among the rest:

We took a walking tour of Trastevere from my Rick Steves guidebook (he is the BEST and was basically the fifth member of our family in Italy) and he told us to stop by Biscottificio Innocenti for their old-fashioned cookies. It was adorable – authentic, off the beaten path, and delicious. We spoke with the girl there whose great-grandparents started the bakery and she told us about their special ovens which run on two different speeds. We each got a cookie that the baker called “ugly but good” and then I got a heart-shaped cookie with Nutella inside. One of my regrets from Italy is that we didn’t buy enough cookies there to last the rest of our trip, especially because we got eight cookies for less than three Euros. 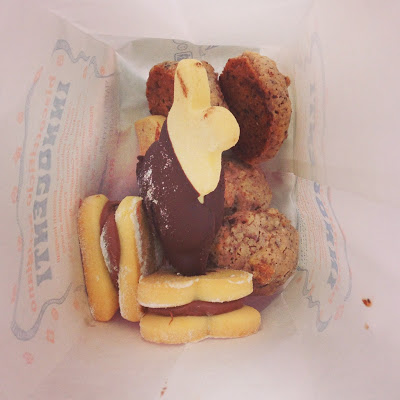 Several places in Piazza Navona around the Fountain of the Four Rivers offer the famous Tartufo, but Rick told us to try Tre Scalini, and who are we to deny Rick? Tartufo is a large ball of vanilla ice cream with a cherry in the middle, covered in a rich chocolate shell, and topped with whipped cream and a rolled wafer. There was no way we could have each conquered a dessert of this size, so we got one to-go and searched for a spot to eat it before it melted. First, my dad wanted to sit in a spot right in front of a pile of vomit, not seeing it of course, but wondering why such a huge space was empty. Then we sat in front of gates of some sort next to some Europeans talking about Bruce Springsteen, but we were asked to move (in Italian) by a woman waving keys and smiling brightly. It’s a wonder we weren’t all covered in melted chocolate by the end of it, but luckily, only my mom was.

Of all the gelato we tried, this was my favorite. It also happened to be the last we had before leaving. I had black raspberry and chocolate and actually got the same combination when we returned just a few hours later . Luckily, the staff had switched out at that point. 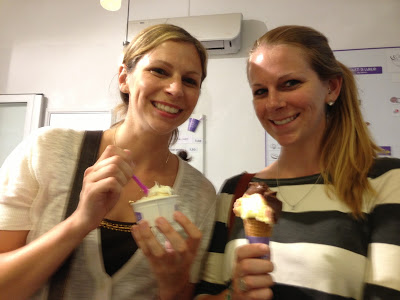 This gelato place was first recommended to me by Carrie and we definitely deserved it after a hectic morning of exploring Vatican City & the museum. Vatican City had more (and more annoying) crowds than we encountered during the rest of our trip. We had to wait in line in direct sunlight for a little bit for our treat, but I’m no stranger to that. I *am* a stranger to wearing a long skirt when it is 97 degrees out in an attempt to dress conservatively for the pope. I was in DIRE need of something cold and ate my gelato fastidiously. We walked back across the street to eat against the Vatican walls because I was not waiting any longer. Hope Francis didn’t mind.

Another of Rick’s picks, at a cute little corner place in Florence run by some frousins, offered some amazing chocolate soufflé / chocolate lava cake, which are basically my favorite. Even though the waitress didn’t know what to say when I said, “So, tell me about this chocolate soufflé,” there was no way we weren’t ordering it. It did not disappoint.

Okay, I’m off to eat an entire box of Cinnamon Toast Crunch since it is the only sweet thing I have in my apartment right now and I am craving sugar like crazy after writing this…