Last fall, I visited my friend Davesh in Amsterdam when he was living there. Over a drizzly weekend, we explored three cities in Belgium. For 48 hours, we lived on chocolate, frites, and waffles. There are several Belgian restaurants in New York City and many places to get Belgian waffles in particular, including one of my favorites, Wafels & Dinges, but for this Global Bites without the Flights feature, I’d like to focus on those frites.

Davesh and I planned a Belgium reunion on Monday at Pommes Frites, the famous East Village place to go for Belgian-style fries. Belgians have been frying potatoes since the 1600s. Rumor has it, American soldiers in WWI thought they were in France while discovering the dish which is how they became known as “French Fries” instead of “Belgian Fries.” Frites can be found at almost every corner in Brussels and are often served in paper cones and with mayonnaise.

It was only right that it happened to be raining when we decided to go to Pommes Frites since it rained in every city we visited in Belgium. We definitely deserved our fries after our intense Yoga to the People class nearby. 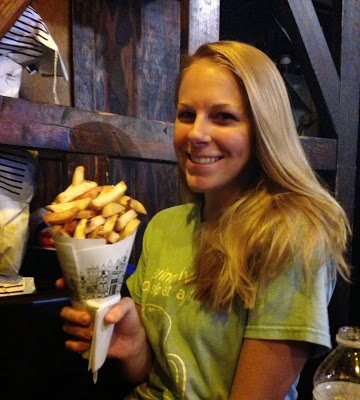 What makes Pommes Frites special is that the potatoes are fried twice – once to cook and once to crisp. Pommes Frites has the traditional European mayo of course, but also a wide variety of sauces to try, including Parmesan peppercorn, blue cheese, wasabi mayo, and Irish curry, to name just a few. If you are scared of commitment (aren’t we all) or want a few extra fries, you can try any of the sauces you want with a few bonus fries before you order. Davesh and I got a large cone to share, with regular mayo, “especial” sauce (mayo + ketchup + raw onions), pomegranate teriyaki mayo, and cheddar cheese, because little is better to me than cheese + potatoes.

These fries sure brought us back to Belgium as planned. We made sure to reminisce about our weekend there while we dipped away – the only thing that would have made it better would have been some Belgian beer to sip at the same time.