The next continent I want to travel to is Africa. I have a craving for it like you wouldn’t imagine, but I am having trouble taking the plunge and actually planning a trip. This is mostly because of two issues – where within this huge continent do I go and will anyone accompany me there?

Before I suck it up and just book tickets on a whim by myself one night (it’ll happen soon, I can feel it), I thought I could at least start to explore the continent’s cuisine as my third entry in Global Bites without the Flights.

Last week, Kater and I met at Awash in the East Village to catch up on her recent Eurotrip and to try out Ethiopian food. The first thing we did was decide on a wine. I’m not a big wino – I would much rather have beer, vodka, or chilled Patron – but when eating Ethiopian, do as the Ethiopians do. A traditional Ethiopian meal is served with tej, a honey wine. We sampled two, a regular dry honey wine and one that was similar but with blackberries as well. The blackberry wine was way too sweet for an entire meal so we went with a bottle of the Sheba Tej, which happened to have been made in New York, but it still counts.

Kater and I ordered a combo of two meats and three veggies – these descriptions are from the menu, the bebere sauce is made of chili peppers and other spices.

Ethiopian food is served on a flatbread called an injera. It is similar in function to Indian naan, but soft and thin. To eat your meal, just tear off a small piece of injera and wrap it around whichever foods you want – no utensils necessary. I don’t think I’ve ever had any of the veggies before (I eat *maybe* three vegetable servings a year) and was pleasantly surprised with all of them, especially the lentils. The meats were delicious – the beef was very spicy and although I didn’t realize at first that some of the lamb was still on the bone, once I figured that out, I was pretty happy. 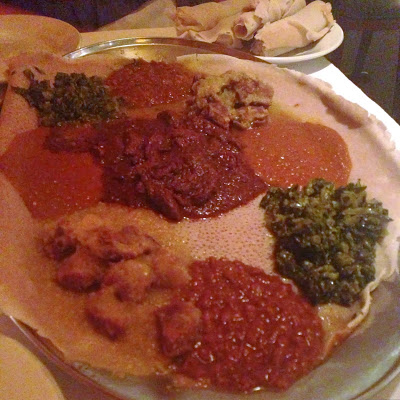 There were two things that Kater and I forgot about while eating Ethiopian though. One is that Ethiopian food is typically eaten with just your right hand, I think we may have used both and not focused on the rules. Two is that we did not perform gursha, the act of feeding each other as a sign of friendship and love. I have a feeling if we had ordered another bottle of that honey wine, gursha may have happened. Something to look forward to for next time.