Today I was asked if I ran the NYC Marathon on Sunday by four different people – three at physical therapy and one at Lululemon. I was completely honored by this question, as if *I* could ever run a marathon. It was due to the t-shirt I was wearing which shows the NYC Marathon logo on the front and then reveals the truth on the back, “VOLUNTEER.” I sure did not have it in me to run the marathon on Sunday, nor probably will I ever (especially given my uncertainty with just a 7K last year), but I was a damn good volunteer, if I do say so myself.

I got involved in volunteering for the marathon because my amazing frousin Emily (who you may recognize from her recent appearance on Good Day New York) was co-leading the effort for the Mile 14 Water Station takeover by the November Project. If you haven’t heard, the November Project is a free workout group that meets way before I wake up with tons of amazing people who love working out, being together, and inspiring each other. It’s something that I’ve been tempted to try but since I’ve had foot injuries since July and now it is cold out, it may take some time still for me.

We committed to volunteering back in the summer, but it wasn’t until two weeks before the marathon when I started to wonder what it was going to be like. Because I think too much about everything, I was wondering if it would be too cold, or raining, or if I’d be exhausted from having to wake up so early, or if I’d get completely soaked with water for the entire eight-hour shift. I can’t imagine my thoughts if I had had to run the 26.2 miles with how much the thought of volunteering overtook my mind.

When Sunday came, I realized that the day was going to be awesome right away. My sister and I had both had tiring weeks so we ended up going to bed at 9:30 on Saturday night, which is probably the earliest I’ve gone to bed since 1995. We got the perfect amount of sleep to get up and get to Long Island City around 7 to meet with Maura, Austin, Davesh, and members of the November Project. I bundled up in two pairs of socks, rainboots, rainboot liners, two pairs of leggings, a short-sleeved t-shirt, a long-sleeved t-shirt, two jackets, gloves, a beanie hat, and a November Project trucker hat – could I *be* wearing any more clothes?! Why yes, I could, as they also gave us a long green poncho and blue gloves to top it all off.

We had a lot of setting up to do when we got there. My friends & framily decided we would take care of water rather than Gatorade. We filled cups up on a table on three different levels. I didn’t have much confidence in this because I have forgotten all about physics at this point in my life and it just didn’t make sense to me that these cups would stay put. I also was slightly concerned about the ridiculous gusts of winds that kept coming, but somehow, everything was alright.

Once the runners started coming, I stayed on the front line the whole day. Because of my weird long legs and limbs, I could still be touching the curb (a strict requirement that was broken a lot due to our excitement) and be pretty far out into the road for a runner to see me first. As I am the clumsiest person I know, I thought I would be dropping cups left and right and missing runners, but I did a pretty solid job. I was good at letting the runners know that we had Water (Wa-Ter, Agua) instead of Gatorade, making eye contact, handing off the cup smoothly, and giving them the best words of encouragement I could.

That’s the greatest part of the NYC Marathon, the cheering. It’s such an amazing feeling to be present for this incredible accomplishment in 50,000 people’s lives. Marathon Sunday makes everyone happy – the entire city is in awe of what the human body and mind can do. It makes you think what you might be able to do if you can just put your mind and entire heart and soul into something. And to be just a tad selfish, it also does make you feel awesome when you see someone struggling a little and you’re able to make them smile with a few simple words.

You’re not going to catch me running in a marathon anytime soon, but you can for sure count on me to voluncheer again. 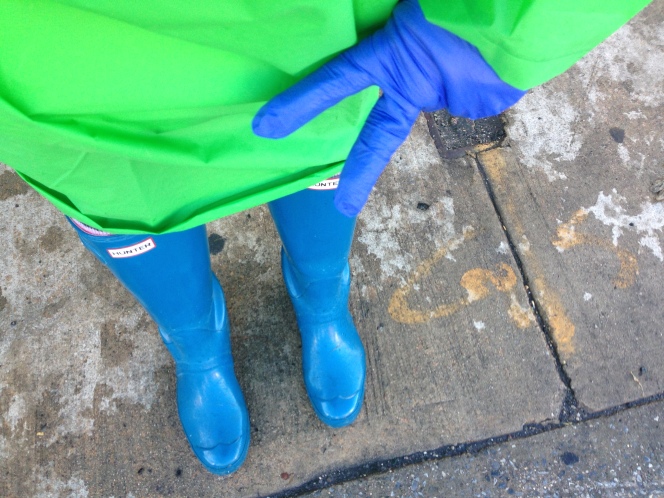