Avid readers of this blog may know that I am somewhat of an art nerd. It all started in the ’90s when I would go to “Art Goes to School” with my dad while he talked about different paintings to my sister’s classes. It got really bad when I started to wear a red French beret everywhere I went (for visual proof of this, check out this post). While I know some people avoid museums like the plague when they travel, seeing my favorite artists’ work is often a big draw for me when traveling. If you feel the same way about art, here are some of the best spots in Madrid and Barcelona to get your fix. And if you don’t feel the same way about art, hopefully this post can inspire you to try it out anyway.

The best painting in the entire Prado (and this is one of the best collections of art in Europe) is Las Meninas by Diego Velázquez, painted in 1656. If you don’t recognize the name, I’m sure you recognize the painting. Although this painting is surrounded by other works of the court painter Velázquez, it’s difficult to look away from this one to take in the others.

Standing nine feet tall but with all the action happening in the lower half of the painting, there’s a lot going on. Princess Margaret is flanked by her entourage of maids (Meninas) and a disinterested dog, while Velázquez himself is painting Margaret’s parents, King Philip IV and Queen Mariana, as reflected in the small mirror in the back. Then there’s a random dude leaving or entering the room, seemingly just to demonstrate perspective.

My sister revealed to me that when she and my dad were talking about what to do in Barcelona, my dad said “Well, you know Erin’s going to make us go to the Picasso Museum.” And make them I did. I’ve been a Picasso fan since that red beret looked good on me and I’ve gone to many Picasso-focused exhibits, like Picasso Guitars at the MoMA, Picasso: Black and White at the Guggenheim, and most recently, the Cubism exhibit at the Met.

The museum predominantly features the Picasso that we don’t normally see elsewhere – his early stuff. Pencil drawings from childhood, paintings that won him scholarships as a teen, and his work in art school. The museum is set out chronologically so you can really get a feel for his personal growth over the years.

My favorite part of the Picasso Museum is the room with his forty or so interpretations of Las Meninas – yes, that’s right – the painting I was *just* talking about. I could imagine people walking in and not really knowing Velázquez’s version and not getting it, but for our family, who had just seen and obsessed over Las Meninas in El Prado, it was an incredible experience to see each iteration that Picasso did over a five-month study.

When Picasso lived and worked in Barcelona, he often hung out at an adorable bohemian Paris-inspired cafe Els Quatre Gats (Catalan for The Four Cats). He painted the cover of their menu and had some of his first one-man exhibits in this spot. Go and do your best Picasso impression while pretending to paint the menu yourself. 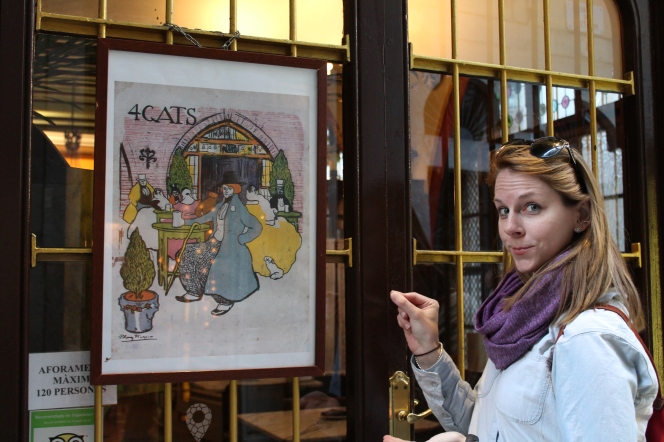 The piece people come to La Reina Sofía to see is Picasso’s Guernica. Just as I had an emotional experience seeing Michelangelo’s David, when I saw Guernica, my mind kinda freaked out. I’d been wanting to see this mural since I started learning Spanish in middle school. When we were planning our trip, I did extensive research to prepare myself so that when I saw it in person, I would know exactly what to look for in every inch of it.

This ginormous masterpiece is Picasso’s reaction to the Germans “practice” bombing the Spanish town of Guernica in 1937 for three straight hours, all with Franco’s permission (and maybe even at his request). Just weeks after the horrendous bombing, which destroyed the town and killed – by some accounts – 1600 civilians, Picasso presented his painting at an exposition in Paris. Guernica became an effective piece of anti-war propaganda. It’s truly heartwrenching.

On a much lighter note, architect Antoni Gaudí’s Park Güell is a must-see in Barcelona. Originally envisioned as a housing community for Barcelona’s elite, this park remains one of the city’s most visited tourist destinations. The park is so whimsical and colorful that it feels as if you are in a Dr. Seuss book although it was started in 1900. It’s hard to imagine the 1900s being so modern. Two gingerbread houses straight from the fairy tale greet you upon entrance. There is a hall of 100 columns where a market would be and a central square with curved benches that are good for your back and a view of Barcelona that’s good for your eyes. Much of the park is covered in mosaics, many from broken plates and bottles. Park Güell is a great place to spend a few hours in Barcelona as every corner you turn is completely different than the corner before. It’s meant for exploring. 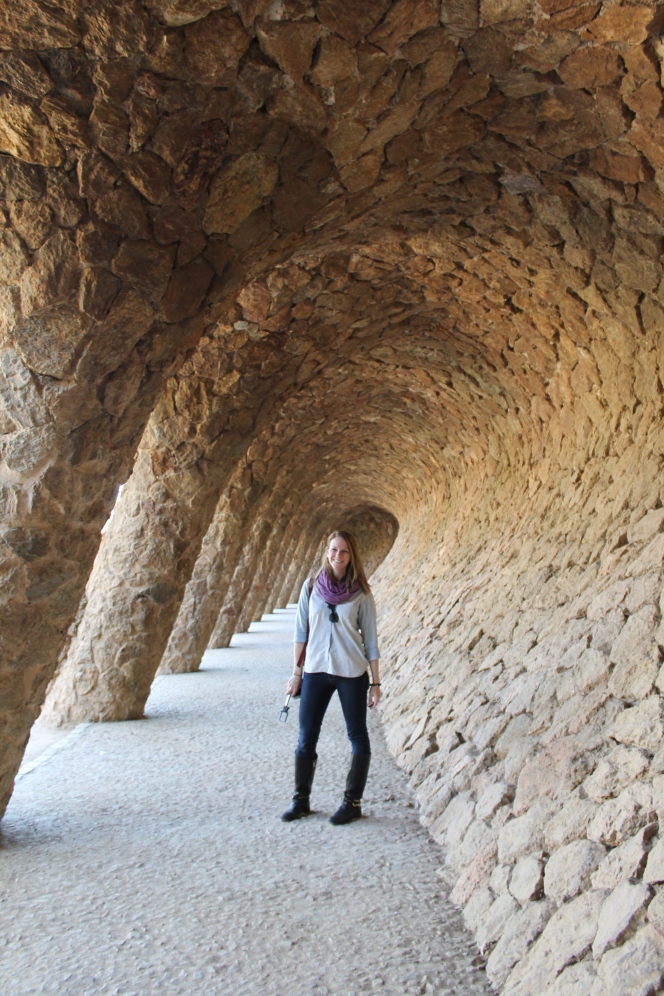 There are several other Gaudí buildings in Barcelona (La Pedrera, Palau Güell, Casa Batlló) but the other must-see Gaudí work in the city is La Sagrada Familia church. It doesn’t matter what religion you are or how religious you consider yourself – go for the design. This church has been under construction since 1883 and is anticipated to be finished in the 2020s. Think about that for a second – generations of work have been put into this church, generations of visitors have come to see it in all its different phases. The 56 columns in the church imitate trees in a rainforest, there are cubist-like stained glass windows everywhere, and the outdoor walls look like the most intricate drip-castle you’ve ever made on the beach. Just like in Park Guell, everywhere you turn is completely unique and something you’ve never seen before anywhere. Explore away. 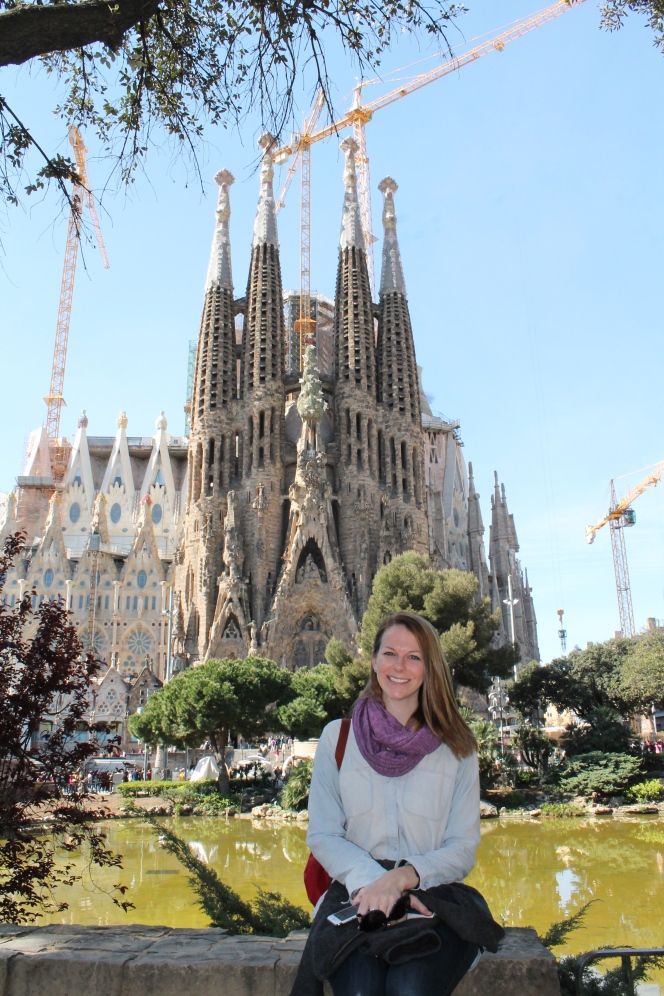 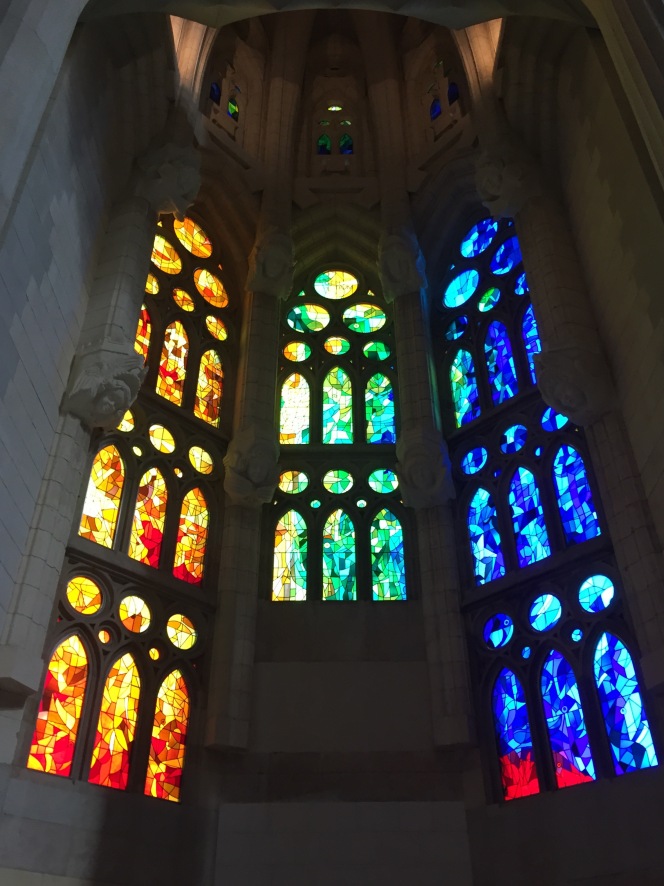 If you go to Madrid or Barcelona and don’t see any of these works, I won’t be mad, but I will be extremely disappointed. As Picasso is known to have said:

“Art washes away from the soul the dust of everyday life.”

Bonus Tip: Many of the museums mentioned are best enjoyed by buying tickets in advance for scheduled times. If you don’t mind some of your visit being structured, a little planning can reduce time waiting in lines significantly.