I started to wear glasses in second grade and wore them until I was in high school, when I was finally able to put contacts in my eyes without passing out from the fear of it. Today, I use my glasses a lot more while traveling than I do when I’m not. In case I fall asleep unexpectedly from a day of aggressive sightseeing, I take my contacts out earlier than normal when I’m away. I also wear my glasses on overnight flights so that I don’t arrive in a destination with dry eyes and a headache.

I don’t have the best track record with glasses, breaking them in soccer games as a kid when the ball would inevitably hit me straight in the face, or in January, when I dropped a brand-new pair of glasses behind the dresser in the hotel room in Charleston. I have also had bad luck with sunglasses over the last few months while traveling – leaving a pair in a bathroom in Switzerland, losing a pair in Philly, and breaking a pair while kayaking on the East River.

I was recently contacted by Firmoo, asking me to try their “global optical online store” and thought it would be a great opportunity to get myself a pair of glasses I could travel with, without risking my “good” pair that I get each year from insurance. The site has prescription and non-prescription glasses as well as a variety of sunglasses, with most frames in the $20-$40 range. I picked a hipster-like pair in black, which now appears as only available in purple and tortoise. I typed in my prescription as last received from my optometrist in April. What I didn’t know was my PD, Pupillary Distance, or the distance between my pupils in millimeters. Firmoo recommended having a friend measure the distance with a ruler. It was determined, while at a bar with a ruler against the bridge of my nose, that my PD was 56. 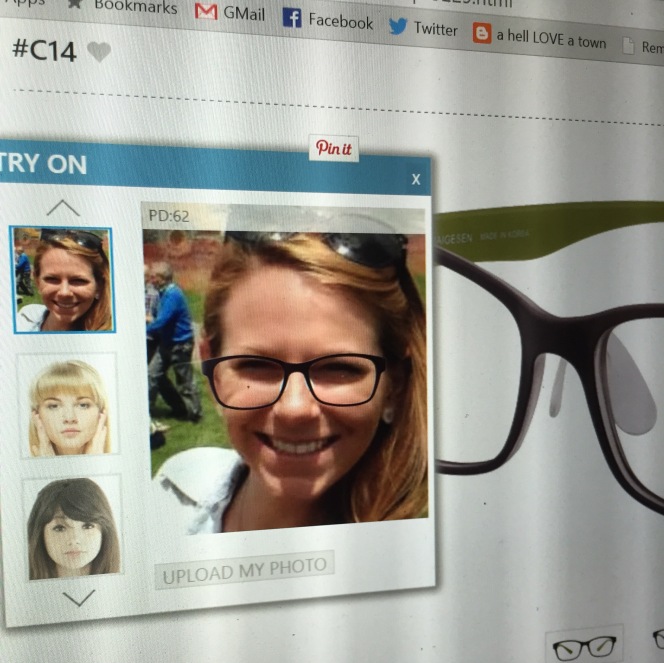 My favorite feature on Firmoo was that I could upload my photo and see what the frames would look like on my face. Since you can’t return prescription lenses after they’re created, this is a very important feature for an online glasses store. My custom-ordered glasses came out to a total of $40, including shipping.

I received the glasses about two weeks after ordering and was tickled that they came in a glasses case printed with maps on the outside. It’s as if Firmoo knew. The glasses I received work great, which means that my friend did a good job on measuring my PD, but also that Firmoo did a good job making my lenses to the right specifications. The frames I chose are extremely light and don’t appear to be as sturdy as my other glasses, but for a spare pair, they’ll do just fine. Plus, this means my luggage won’t exceed the weight limit.