The options for nightlife in New York City are practically endless, but they can get repetitive. A $9 Bud Light here, a late night order of cheese fries there, and sometimes you can’t identify one weekend from the next. If you want a unique night out, give New York Neo-Futurists a shot.

New York Neo-Futurists perform Too Much Light Makes the Baby Go Blind (TMLMTBGB) on Friday and Saturday nights. The concept of the show is 30 plays in 60 minutes – you can do the math. The theater group performs an extremely diverse variety of short-form plays. It moves quickly, and for a good reason – if the timer buzzes and the performers have not gone through all 30 plays, the night sadly ends anyway.

Before a friend and I went to the show one night last month, I looked up the Yelp reviews and found that people either love it (4 or 5 stars) or hate it (1 star). What I took from this scattering of ratings, being a former AP Statistics student, is that the show is intelligent, and some people just aren’t going to get it and might want to stick to those Bud Light nights. 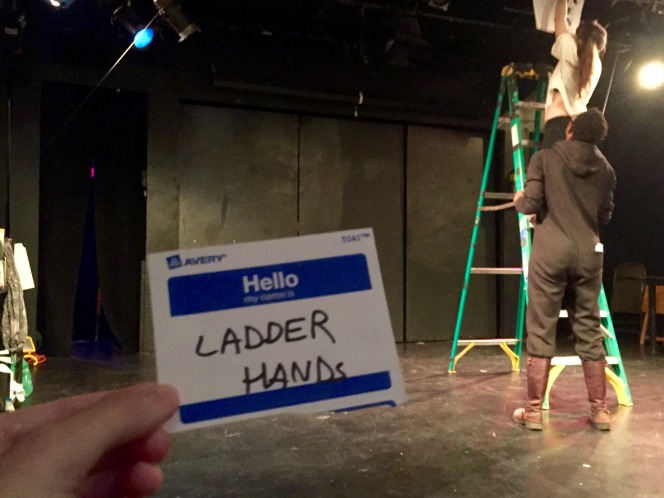 TMLMTBGB is at the Kraine Theatre, underneath KGB bar, in the East Village. If you do not obtain tickets in advance, you can get into the show for free during the month of your birthday (awesome!) and if it’s not your birthday month, a die is rolled and you pay $13 plus whatever the die roll is (still awesome). When you go through the curtain, you’re handed a “Hello, my name is” nametag to wear for the evening. My name was “Ladder Hands” and my friend was “Gym.” We sat in the second row of the small theatre to make sure we were close but not the first row of defense in case of unsolicited audience participation. The cast was pinning the numbers 1-30 on a clothesline on top of the stage to represent the different plays in our program. When the show began, we were encouraged to yell out the number of what play we wanted to see. For some reason, my friend’s choices kept getting chosen over mine. 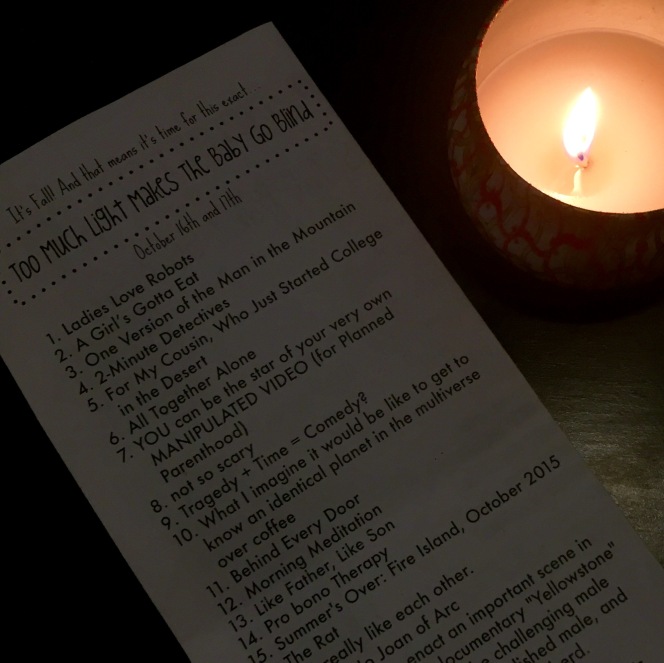 I found the show incredibly engaging and creative, though as would be expected, some plays were better than others. There were a few that I didn’t appreciate, but as a whole, color me impressed. As some of the plays return for future shows, I won’t give away too much, but I will call out a few plays that stood out for me.

14. Pro bono Therapy: In which a member of the Neo-Futurists laid down on a box in a faux psychiatrist situation and admitted something they would normally not want to admit in front of an audience of strangers. The psychiatrist player reacted, and then a random audience member was pulled on stage and also had to admit to something, and the psychiatrist reacted again. During that skit, I determined that if I’d been pulled up on stage, I would have had to admit that my pants were unbuttoned because they were fresh out of the dryer and too tight.

27. Moo Doy Layster May Frek Dage Nye Pamperbast Croy: In which performers sit on stage speaking absolute gibberish while the audience is handed a translation guide. Turns out they are discussing how sad it is how someday, no one will be reading books anymore, and discuss particular classics and how important they are while always including the caveat “which I have never read,” showing that we may already be approaching the demise of written literature.

7. YOU can be the star of your very own MANIPULATED VIDEO (for Planned Parenthood): Where an audience member was brought on stage and interviewed about his job and life. The performer on stage with the audience member tried to get him to say certain words that could be incriminating. The video was uploaded later that week and is available here, if interested (sorry, Chad).

The show also featured a watermelon, the voice of the “rat” in Kraine Theatre, the performers imitating bison in Yellowstone, and much, much, more. Our show unfortunately ended with a handful of plays still undone. I’d definitely like to return to the show, perhaps during my birthday month of April, though it would also be fun to roll the die and take a chance on the ticket price.

Further proof that the show was worth seeing was that as soon as the show started, I was able to forget that 10 minutes before leaving I had accidentally spilled an entire candle’s hot wax all over my floor, wall, books, and one of my most prized possessions, my banjo. I had a small meltdown (pun intended) and was very mad at myself. Don’t worry, Dad, I’ve since cleaned the banjo and it’s sparkling clean again. The wall still could use some work. Too much candle light makes the wax go everywhere.

Thank you, New York Neo-Futurists for the tickets. Opinions are always my own.