It seems that I make resolutions on a weekly basis. Because I am ridiculously hard on myself (as even my Fluent City French teacher pointed out during my third class), I’m always picking things out that I should do better and things I should stop doing. “Always be a work in progress” has been a quote on my Facebook profile since college. But last year for my *official* 2015 resolution, I chose something that wouldn’t make me feel bad about myself and wouldn’t make me question my past mistakes. The resolution, the goal, was to explore 15 new places during the year of ’15.

What counted in my 15? Anywhere I hadn’t been before that I felt I fully explored in the time I had. 15 different states would have been awesome, 15 countries would have been even better, but I have limited vacation time and a full work / social / family calendar, so I decided that it meant 15 different cities, areas, countrysides. Maybe I’ll get to 15 countries a year one day, but it was not this past year. I still think the 15 places are nothing to shake a stick at. So put that stick down and read on.

#1 Charleston, South Carolina: In January, I went on a frousin’s getaway with my sister and three of my cousins. We explored the waterfront, walked around Magnolia Plantation, and picked out our future mansions that each had steps next to the sidewalks to help us into our carriages. We willingly walked through the scariest place I’d ever been. I maybe even have photograph proof of spirits in the Old Charleston Jail. We ate at Martha Lou’s, Husk, and Hominy Grill, to name a few. We bought cookies at King Street and I kicked myself 12 times over for not buying a huge box to bring home. We played Jenga in a bar that had dollar bills nailed to every surface of the walls.

#2 Lisbon, Portugal: In March, my sister and I started off our Iberia trip in Lisbon. I arrived hours after I was supposed to and my luggage arrived a day later than I did. We fell in love with Lisbon and the color yellow – represented in the buildings, the pastries, the tiles, and the streetcars. We became a part of an 80-year-old’s birthday party. We went to Sintra nearby and explored three castles from different time periods. We paid homage to the explorers of the past in the neighborhood of Belém. We ate multiple pastéis de nata a day.

#3 Porto, Portugal: Katie and I took the train up to Porto for our next stop. We went out on the water. We took a food tour with Taste Porto and I ate one of the best sandwiches of my entire life. I ate my first (and most likely my last) sardine. We went back to the eclair place three times. We crossed the bridge to Gaia and sampled port wine from Ferriera. I hated port wine. We took a cable car back. I picked out my future apartment on the waterfront. 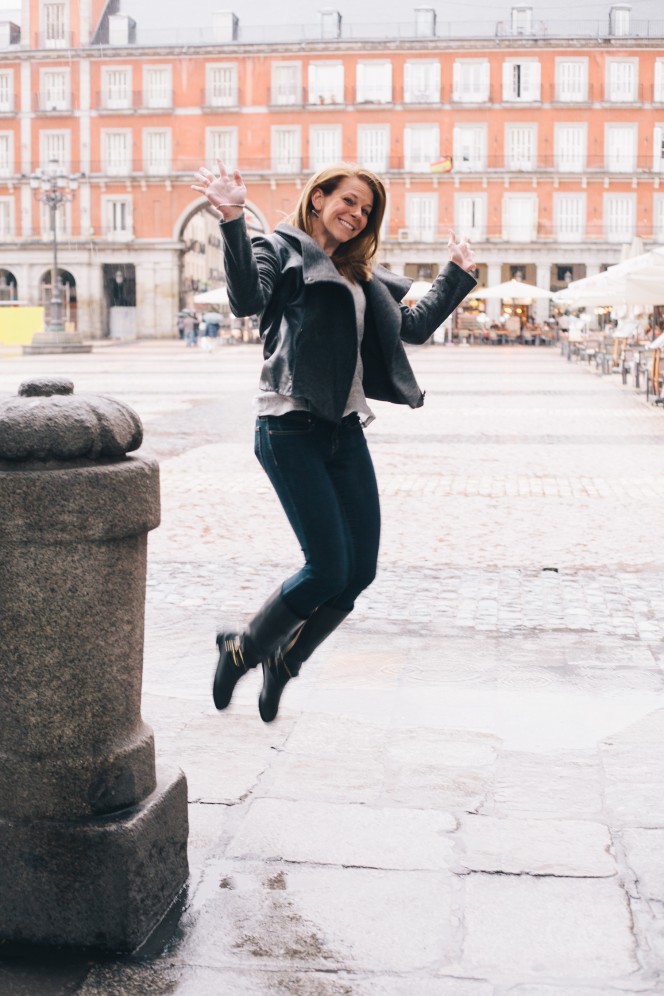 #4 Madrid, Spain: In Madrid, my sister and I met up with my parents. It rained almost the entire time but we still explored to our best abilities. We had a family photoshoot with Flytographer. We drank sangria at the Bull Bar in Plaza Mayor. We went on a tapas crawl, ate calamari sandwiches, and dipped churros in chocolate. We were mesmerized by Guernica and Las Meninas.

#5 Granada, Spain: We took the train down to Granada and stayed on Plaza Nueva. We walked through twists and turns of adorable streets to find local cafes and viewpoints of the stunning Alhambra. When visiting the (mostly outdoor) Alhambra, the sky was gorgeous but the air was frigid and full of snowflakes at one point. We had dinner with a family friend studying there for the semester and lunch with a cat.

#6 Barcelona, Spain: We ended our Iberia tour in Barcelona where we were finally warm. We explored Gaudí’s gaudy work by visiting La Sagrada Familia and Park Güell. We visited the Picasso Museum because of my obsession. We went to the beach and dipped our feet in the Mediterranean. We danced with the locals.

#7 Lyon, France: In May, after almost getting kicked off the train in Southern France for not having Euros after all my credit cards were declined, I made it to Lyon to meet up with Kater. We ate cheese and baguettes on the water, borrowed a knife from a motorcycle gang, met French Waldo, perfected our American accents with some Brits, and saw some of the coolest trees I’ve ever seen in my life along the riverfront.

#8 Geneva, Switzerland: We marveled at the views of Lake Geneva, the fountain, and the mountains. We watched birds with weird feet make a nest for their babies on the edge of someone’s boat with straw that was way too large for the nest. We watched other birds work on their nest in front of a man in a speedo and learned about gender roles within the swan community.

#9 Lausanne, Switzerland: We spent the night in Lausanne, also on Lake Geneva, but known to have a better nightlife. We went to an awesome bar, the Great Escape, then escaped to the lakefront neighborhood of Ouchy for the morning. We climbed the steps of the cathedral, snuck into a hotel we weren’t staying at just to see how the other half lives, and peeped on even more birds. 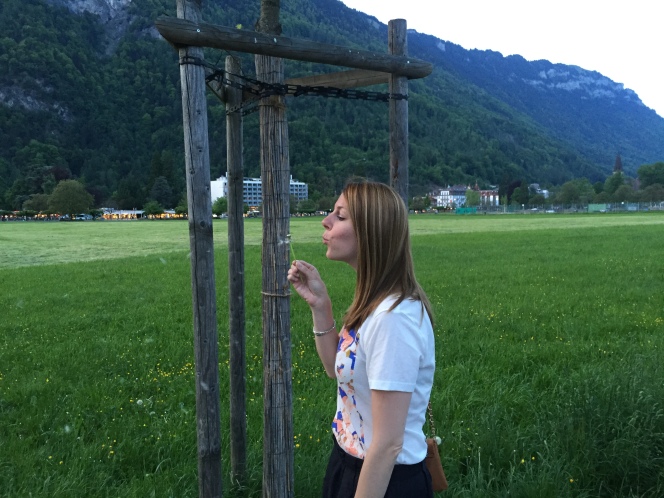 #10 Interlaken, Switzerland: We took the “scenic route” and sat in the front row of a train through mountains, valleys, tunnels, and rivers, to end up in the cute little touristy town of Interlaken. We ate fondue, listened to yodelers, and played the alphorn. We discovered Rösti and raclette on the top of the tallest building in town for the best view I’ve ever had while eating potatoes and cheese. We contemplated parasailing. We walked along the river instead.

#11 Bern, Switzerland: We ate more rösti and raclette. We stayed up late with locals. We learned some Swiss insults that our new friends said to and about everyone around them. We wandered around finding fountains and sculptures of bears, without actually seeing the living bears of Bern we had come to see.

#12 Zurich, Switzerland: Kater and I parted ways in Zurich but spent some time together in the city before she left for Italy. We sprinted to a cruise on Lake Zurich, came across locals swing-dancing in a gazebo, saw a direwolf, and had one last meal together. I then explored Zurich on my own the next day which was rainy but peaceful. I ate a crepe, went to the Swiss National Museum, swung on the swings in a park, and almost got kidnapped by a bartender.

#13 Lucerne, Switzerland: On my last full day in Switzerland, I took one final train trip to finish up 7 cities in 7 days and went to Lucerne where I found the most adorable fairy-tale town with cute bridges with paintings from hundreds of years ago (NBD), a gorgeous lake, and a beautiful lion carved into the rock as a monument to lives lost during the French Revolution.

#14 Chicago, Illinois: In September, I spent a weekend visiting my friend, Kristyn, who just moved out to the Windy City for school. Thankfully it was not windy yet. We drank a lot and I broke my phone. We ate on a food tour, drank even more on a beer tour, and laughed a ton at Second City. We walked over 10 miles one of the days, which made up for the hot dogs and popcorn we devoured.

#15 Los Angeles, California: In December, I found myself with a few free afternoons and one free morning in Los Angeles.  I caught three sunsets on three separate beaches. I ate poke for the first time since my trip to Hawaii. I impressed my coworkers with how much I ordered and how much I ate at Roscoe’s Chicken & Waffles. I met up with a friend who I hadn’t seen since my nickname was “Erwin.”

I have not set the same goal this year with visiting 16 places, because why would I want to do the same thing I did last year? Don’t you worry, though. I have many other goals for this upcoming year which will reveal themselves when the time is right. Stay tuned.