If I don’t make it to the continent of Africa this year, I will be very upset with myself. I’ve been thinking about a particular trip I want to take to a few countries in Eastern and Southern Africa for a very long time. It just so happens that one of my travel friends, Marie of One Carry On, is an expert on everything Africa. When trying to meet up with a few other travel friends of ours for dinner, Marie recommended Safari, the only Somalian restaurant in NYC. Marie, Katie, of Stories My Suitcase Could Tell, and Karissa, of Which Way to Somewhere, met in West Harlem one night last month.

We’d made reservations because the yelp reviews were all raves, but perhaps because it was a cold Wednesday night, we had the restaurant to ourselves for the majority of our meal. This was a good thing, because once the food came out, we were slightly embarrassing as a group of four travel bloggers with the amount of photos we took. 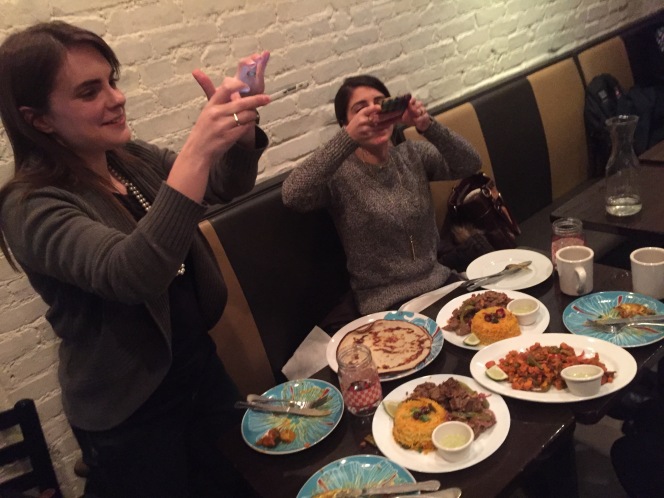 The meal started out with cups of Shaax Somali, described on the menu as “very aromatic sweet Somali tea made with ginger, cardamom, cinnamon, and cloves, topped with steamed goat milk.” I *loved* this tea and if it hadn’t been so late in the evening I would have had a few more cups. I don’t even know if it had caffeine in it, but I’m too sensitive to risk being awake until 5 am on a school night. On a warmer night, I would have probably tried the Homemade Mango Juice or the Isabarmuuto, a white grapefruit juice, instead, but I’m glad I went with the tea.

For appetizers, we ordered the Beef and Chicken Sambuzas and the Costo Vegan Wraps. I’ve come to realize in my Global Bites without the Flights meals that every cuisine has a meat-in-a-pocket-of-fried-dough variety, and this is Somalia’s. The sambuzas came with a cilantro dipping sauce that I loved, called Bisbaas sauce. The vegan wraps were pickled vegetables on top of Chapatis, which is soft dough, like Roti. The chapatis were awesome, and seen later in our entrees. The pickled vegetables were good, but a little spicy for my tastes. I had to put a lot of the Bisbaas sauce on them so that I’d be able to taste the rest of our meal without my mouth being on fire. 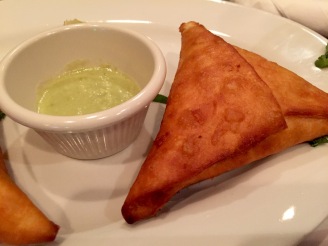 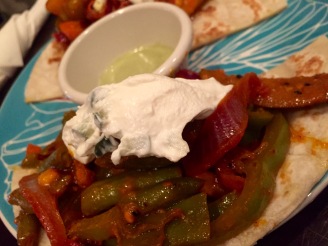 While we split all the entrees, I ordered the Hilib Ari, listed as the most popular Somali dish on the menu – “roasted goat served aside Somali bismati rice and Bisbaas sauce”. I don’t think I’d ever had goat before. It was more tender than I imagined and was good, but I definitely could not have eaten a whole plate of it, so I was glad we were sharing. My favorite dish was Hooyo Faduma’s Mango Curry Chicken – “slow-cooked mango curry sauce over grilled berbere chicken served with side of vegan biryanni”. We’d also ordered another chicken dish and a beef one. 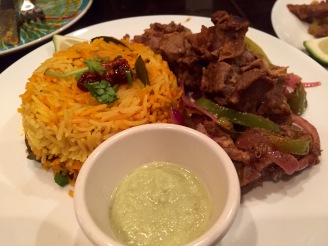 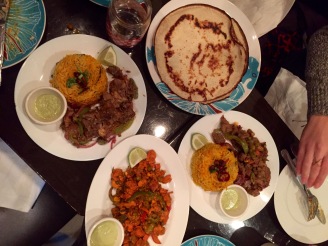 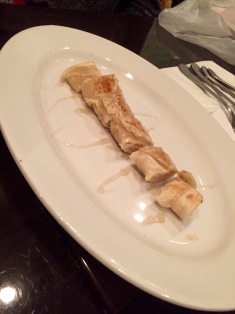 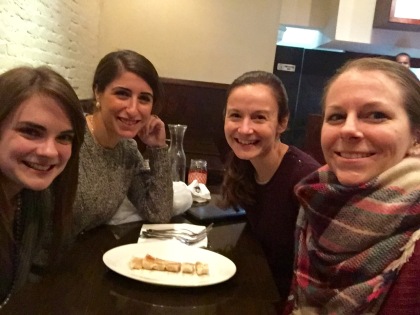