When Kater and I were in Interlaken, Switzerland in May, we went to a VERY touristy restaurant where there was a pair of adorable Swiss elders yodeling, playing the accordion, and offering toots on the alpine horn, an opportunity which I obviously took. We ordered some Swiss beers and a pot of fondue, because, when in Interlaken. 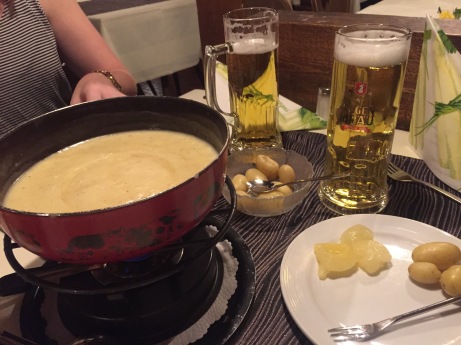 Earlier this year, Kater and I decided to relive our Swiss days at Cafe Select in Nolita. One of my coworkers has been recommending this bar to me for months because of how much I loved Swiss beer. When making a reservation, I discovered I could book in the Après Ski Fondue Chalet, which sounded fancy. After a drink at the bar, the hostess led us into the kitchen. Instead of handing us aprons and putting us to work, we were led through another door to a secret room with a bartender, 4 or 5 tables, and lights hanging from the ceiling. Super. Cute. 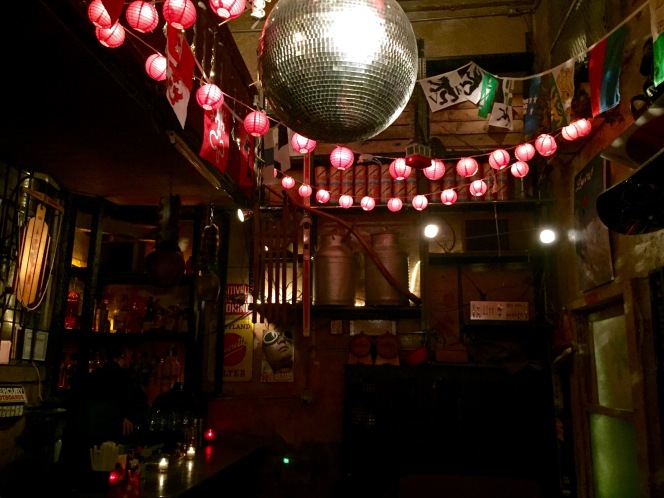 Eventually others started filtering in, but for a while, Kater and I had our own private ski chalet in the middle of downtown Manhattan. Contrary to what my coworker had led me to believe, they did not actually have any Swiss beer. I was initially sad about this, but the menu full of cheese made me feel better. We ordered raclette, the warmed cheese that’s scooped out from a wheel that I’ve raved about before. This raclette was over cornichons and fingerlings. As our main, we ordered a “South of the Alpes” (as they say “Alps” in French) fondue.

The raclette was just as I remembered it being while in Interlaken and Bern. All I really want in life is a combination of cheese and potatoes every single day, and this is one of my favorite variations of that combo. The fondue was also exactly like I remembered in Interlaken, but I’d forgotten how much you could taste the beer in the cheese when we’d had it in the spring. Cafe Select’s fondue was the same way, which wasn’t exactly the Swiss beer I’d been looking for. Trust me, I wasn’t suffering, because it’s still cheese, but I might have liked a less traditional fondue better (like the Truffle Oil Fondue).

If you go to Cafe Select, make sure you get into the Ski Chalet so you can feel as VIP as we felt that night. It almost made me feel as VIP as I felt in Interlaken when I was tooting that alpine horn.