On our second day in the Dominican Republic with Fathom Travel (read an overview of the trip here and a first day recap of planting trees here), we worked with children in a school at the top of the mountains in Puerto Plata.  Our little tour bus puttered and puttered up the dirt roads of the mountains, dodging burrows and cattle. I have never gotten carsick in my life (knock on wood) but I had to move closer to the front of the bus because these roads were no joke.

We were told that some of the kids who go to the school we were visiting started walking at 5 AM to get to school by 8. I struggle to wake up for work each day by 8 and suddenly felt like a huge baby for it. We were the first group of travelers to visit this classroom but others would visit each week in the future to expand upon the English skills the children were learning. In Puerto Plata, where so much of the local economy is sustained by the tourism industry, English skills can be the difference between getting a job and not. 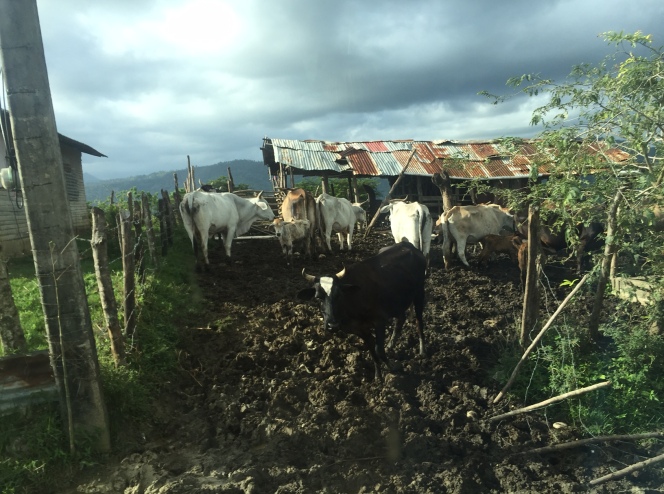 We were welcomed into the fourth-grade classroom by a familiar song of Uptown Funk, which you can’t possibly listen to without dancing, so dance we did. It was a perfect icebreaker, as some of the visitors and some of the kids were a little shy about the experience. But when the students saw what terrible dancers we all were, they started smiling and laughing, and suddenly, we’d all become friends. We stood in a circle, alternating kid and guest, held hands, and introduced ourselves in English, which the students had just learned that morning. They each took an adorable pause after saying “My name is” before they said their own name. “My name is…Wilson.” “My name is…Edward.” 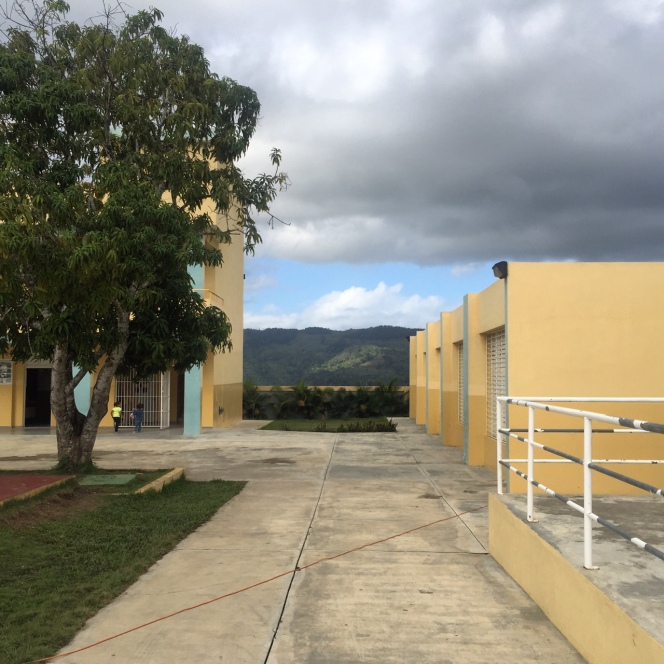 When we were told that we were each going to partner up with a specific student, a little girl with a red headband holding my hand looked up at me several times, with her eyes saying, “We’re going to be partners, right?” I winked back in agreement. This little girl in two minutes had made me feel more welcome than all my classmates had throughout years of elementary school.

I could tell immediately that my new friend, Nathalie, was a go-getter. She knew what was up and grabbed paper and crayons before anyone else did. She reminded me of little Erin in that sense. After all, even on this trip, I was the one to volunteer first to plant a tree in our group. We did some artwork, tracing our hands on the piece of paper and writing our names, then writing our new friend’s name, teaching them to spell it in English at the same time. I didn’t realize until after we left that Nathalie had taken my lead and drawn painted fingernails and knuckle-lines on her hand, just as I had done. 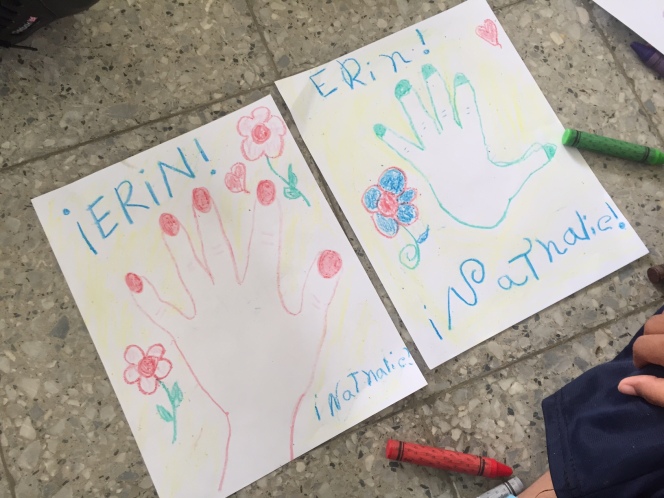 We chatted in Spanish a little bit, though of course my Spanish isn’t as good as hers. She drew a heart on the piece of paper of the kid next to her and I asked if he was her “novio” (boyfriend). She said, “No, el es mi primo” (No, he is my cousin). I told her I lived in New York City and she started speaking really quickly about her grandmother and airplanes. I needed her to slow down and repeat it a few times but eventually learned that her grandmother lived in New York City as well and had taken an airplane to get there. As soon as I left I wish I had asked her more about her life in the DR, who she lived with, how close she lived to the school, etc., but we still got through a lot in our short time. 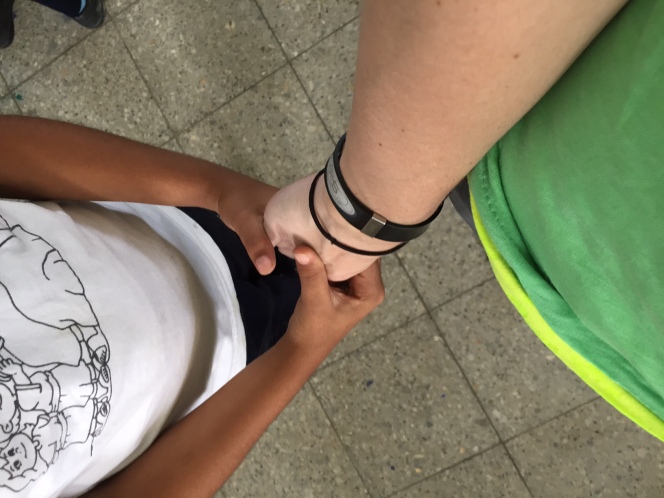 After we finished our pictures, we crafted soccer balls out of a balloon, newspaper, and tape – which, like, hello? What a great idea. Once again, my friend Nathalie was like little Erin and wanted to make her own soccer ball instead of having anyone but me help her. 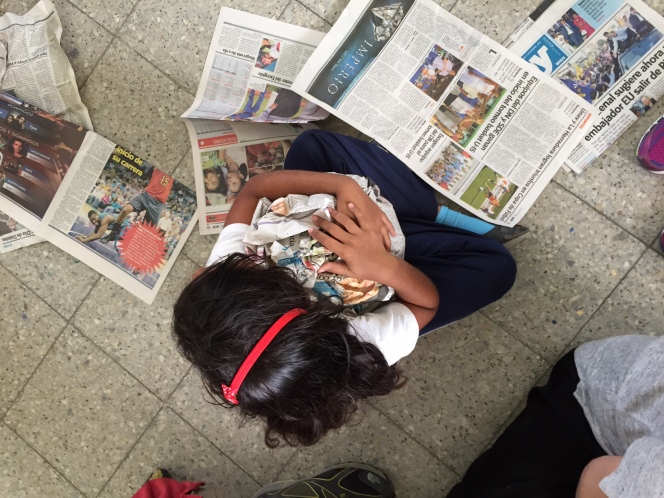 We went out on the playground, drenched in sunlight, with sweeping views of the mountains, and separated into teams to play soccer. I stepped back and played defense and our team ended up winning our game, but the stakes were high for a while. 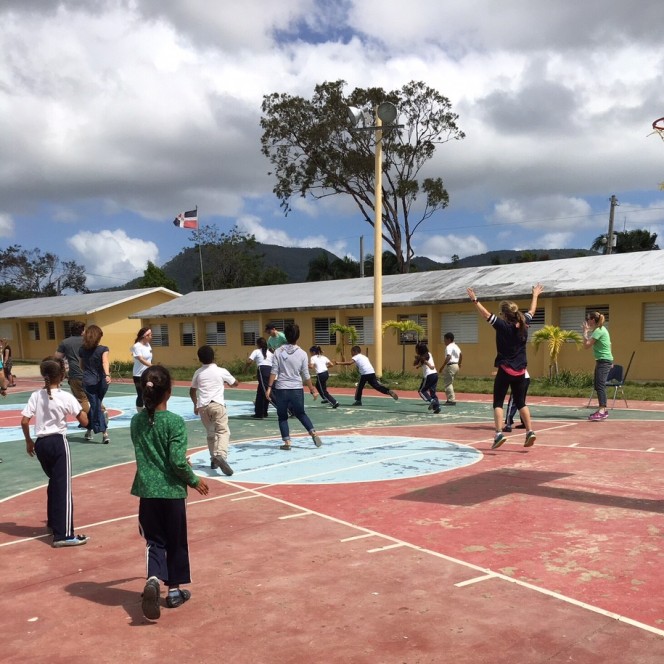 After we danced to more Uptown Funk, it was time to say our goodbyes. A student spoke in Spanish to us while her teacher translated and then I volunteered to give our message of thanks in Spanish to the students. Of course once I got on the bus, I thought of a million other things I could have said to the kids to help encourage them to change the world, but they’re already doing that by welcoming travelers like us into their classroom.

Muchas (x 1000) gracias to Fathom for hosting me on this journey. Opinions are always my own.