I had a weird introduction to Kuala Lumpur, Malaysia. I was signed up for a “premium car” from the airport when all I asked for was a taxi. I had issues finding my hotel due to the address being completely different than what was in Google Maps and the name being completely different than what I’d booked. I searched for street food on Jalan Alor but it was a weird in-between time so not much seemed fresh. I went to a bar to help me stay awake from my jetlag and my waist was grabbed three times by a questionable man (who, I should note, was not local). I fell asleep at 6 PM until 2 AM and was wide awake for a few hours, doing research on what to do in the city. Since I’d woken up early, I thought I’d get a head start on the tourists and visit the Batu Caves, which thankfully changed my feelings about KL at first glance.

I could have taken the train out, which the internet said was easy, but in order to do so I had to walk a half hour to the train station. This (and the fact that I would most likely get lost along the way) would have delayed my head start on everyone else, so I decided to get a car there. While still on my hotel’s wifi, I used my Lyft app, which worked exactly the same as it does in the states. It was just $7 for a 25 minute car ride out there. I’d read some blogposts about the Batu Caves during my insomnia (does it count as insomnia if it was already after 8 hours of sleep?) so I thought I knew what to expect, but when I saw them, I couldn’t contain my repeated utterances of “wow” to my driver. 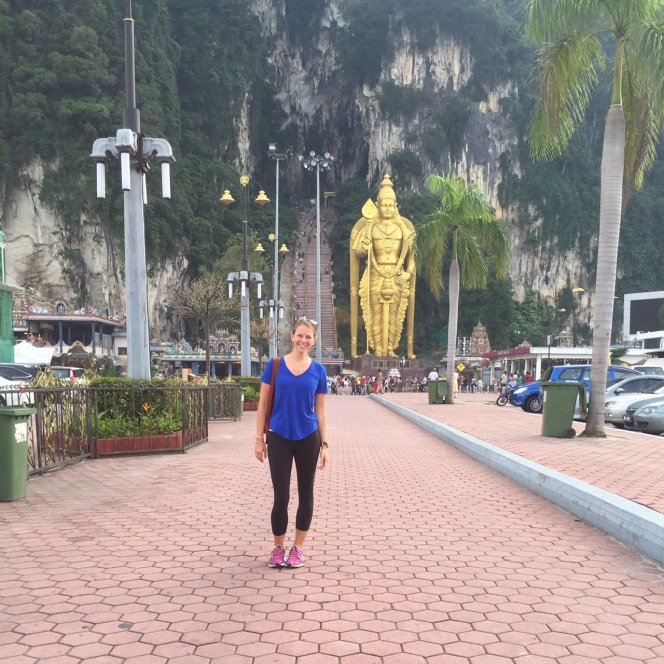 In short, the Batu caves are 400-million-year-old limestone caves, now containing a few Hindu temples. The caves were reminiscent of some of the masses we’d seen when exploring Thailand’s islands, but they seemed out of place to me in that they were not surrounded by water. I’d heard about the stairs leading up to the caves, but 272 hadn’t seemed like that many to me since I lived on a 5th floor walkup in Manhattan for four years. Guess what? 272 is a lot more than 4 sets of apartment stairs. 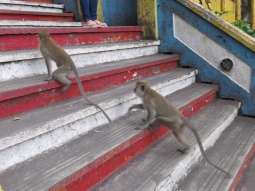 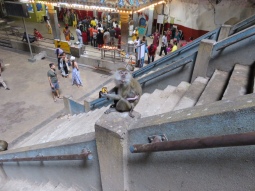 Before I ascended the stairs to enter the caves, I stood in awe for a few minutes at the Lord Murugan statue next to the stairs. And then, I saw a monkey, climbing on the head of a smaller statue at the base of Lord Murugan. I’d heard that there were monkeys at the caves, but my “premium” driver the prior day had said the population wasn’t big. I couldn’t believe that I saw one, and within just a few minutes of my arrival. And then I looked around, and realized my driver had been wrong, or maybe I’d misheard him, because they were EVERYWHERE – swinging in the trees, walking across the power lines, popping out of the garbage cans, and climbing the steps. Maybe a fourth of them had tiny baby monkeys clutching to their chests while they ran around. Could I have asked for anything more? 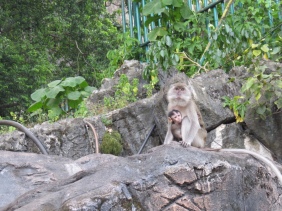 There are three sections of stairs and they are building another section to the left of the current ones. You can help build this section if you climb up with a brick or a bucket of materials. I didn’t know I could have helped at the time I started, but it worked out because I definitely needed both hands free so I could take a thousand pictures of the monkeys. The main cave was huge inside – very dark, a nice respite from the sun, and contained a few Hindu statues in different places along the walls. There are a few openings at the top where the sun peaks in. At the back of the cave, an additional staircase leads to another cave, with brighter ceiling openings, the main Hindu temple, and enough green area for the monkeys to go crazy over. 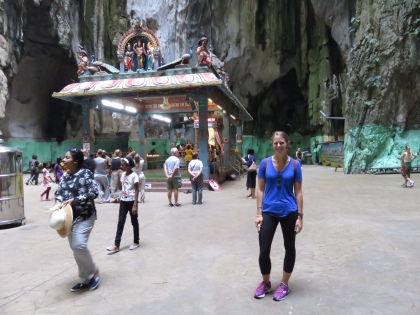 While the main Batu Caves are free, there are some caves at the bottom that charge a fee. I did not go into any of those, but I did pay 35 Malaysian Ringgit ($9-ish) for a guided tour of the Dark Caves, about two-thirds of the way up the staircase. I’m usually pretty nervous in the dark (exhibit #1 & exhibit #2) and not the greatest with confined spaces, but I’d traveled halfway around the world so I went for it. There were two unrelated 10-year-olds in my group so I said to myself that if they could do it, I could do it. One of them ended up leaving the tour with his mom within the first two minutes, and the other was crying the whole time, but I ended up holding myself together without clutching the arm of a stranger. 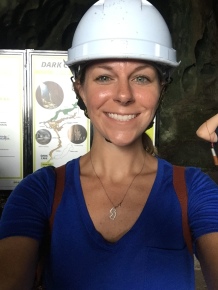 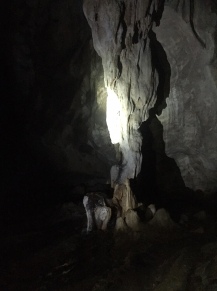 In the Dark Caves, we were in search of insects and animals – some of which are found there exclusively. The ecosystem is sustained because the smallest creatures feed on the guano (bat poo), the medium-sized animals feed on those smaller creatures, and then the bats rule over and eat (and poo over) them all. The bats (200,000 of them!) could be heard at all times but we only saw one up close that was just chilling on a rock at eyelevel. It was not my favorite. We also saw huge spiders which are blind and eat anything that vibrates their web, even if that includes their own children. There were also some crickets that eat their own back legs if they run out of food. It’s no Zootopia, that’s for sure. 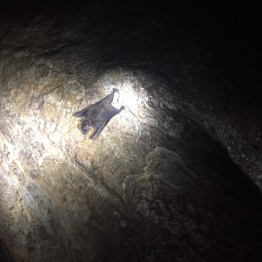 When I left the Dark Caves, I was thankful that I had woken up early because it was way more crowded with tourists than when I had arrived. It was also ridiculously hot out and even walking down the stairs felt like I’d just run a 7k. I found some relief from the heat in the gift shop and with some ice kacang – a traditional Malaysian dessert of shaved ice, syrup, and cubes of jelly (like what’s found in bubble tea).

I had no idea how I would have gotten a car back and I also assumed I’d pay “premium” for it, so I decided to try this train people had written about. It was indeed very easy, 2.3 Malaysian Ringgit ($0.60), and I even got to sit in a car labeled for females only. It would have been nice to have had a “ladies only” area in the bar the previous night. But really my ultimate wish was that they’d had an “Erin and monkeys only” car on the train. I can’t stop thinking about them – though they were less enthused about me.