Traveling solo is hard for a few reasons – You have to figure out everything for yourself, there are times you get lonely (even if you like being with yourself as much as I do), and you can’t try as much of the local cuisine off of someone else’s plate. Which is why, because I only had three days in Kuala Lumpur, I took a food tour with Food Tour Malaysia. Food tours are one of my favorite things to do while traveling, because you are provided Erin-sized samples of many varieties of food, along with the story and history of the country, if you’re on a good one. (Here’s one in Portugal, one in Chicago, and one on the Lower East Side of Manhattan, if interested.)

I chose Food Tour Malaysia’s “Off the Eaten Track” tour mostly because it was offered at night. I knew I’d feel comfortable walking around during the day by myself, but I didn’t know if I’d be going out until the wee hours of the night in Kuala Lumpur – the tour would get me out there at least once.

Charlie, our tour guide, met us at the meeting spot, which was a cheap Lyft ride from my hotel. In my group were couples from Australia, New Zealand, the UK, and friends from Austria. Just from meeting Charlie and the others in my group, I knew it was going to be a fun night. It also helped that it was the most I’d talked or been talked to in two days (#solotravelerproblems). 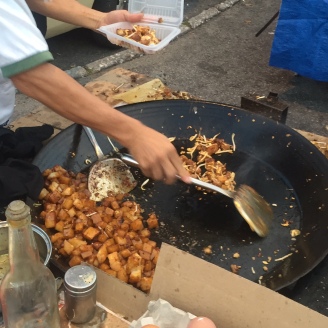 But let’s get down to business. The food. OMG the food. We started out at a local night market where we didn’t see too many other tourists, so I sensed it was a good spot from the get-go. The first thing we ate was a Malaysian waffle, filled with peanuts. Charlie explained to us that peanuts were pretty cheap in Malaysia, so we’d be seeing a lot of them. We also tried Carrot Cake, which was not cake, but a dish that tasted a lot like it with lots of veggies. We sat down for chicken and beef satay with peanut sauce, claypot fishhead curry, and hokkien noodles, cooked over a charcoal stove. We drank lime juice with dried sour plum which were way too sour for my tastebuds, but which others took extras of. At this point in the night, I hadn’t realized just how much food we’d be eating so I didn’t limit myself too much. 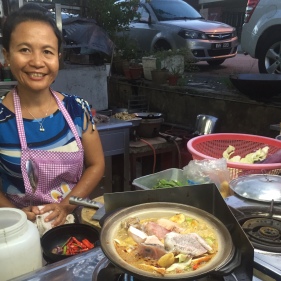 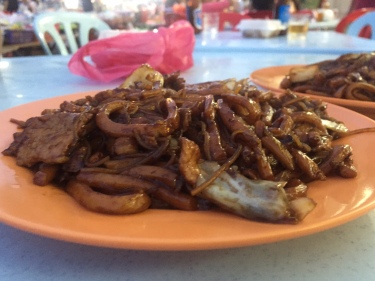 At the second stop, we found ourselves in a food court, where many people go during the workday or worknight for lunch or dinner, depending on their schedules. It was here we tried the national dish that I’d been hoping for, Nasi Lemak from Nasi Lemak Panas, which means “Hot Fatty Rice”. Nasi Lemak is rice, peanuts, an egg, and chilis, typically wrapped in a banana leaf. It was delicious but difficult to eat for me because it was SO SPICY. Ask for one with fewer chilis if you’d like to not burn your tastebuds off. We also tried something called “Otak Otak” which translates to “brain brain”, but was actually just grilled fish, again in a banana leaf. You guys know I’m not a huge fan of fish (except shellfish), so I tried a bite, but I didn’t want to waste precious stomach space on something I didn’t love. 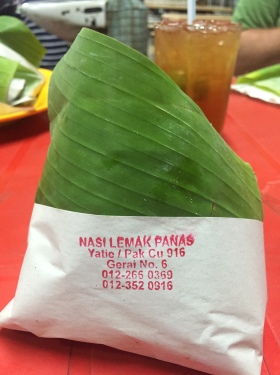 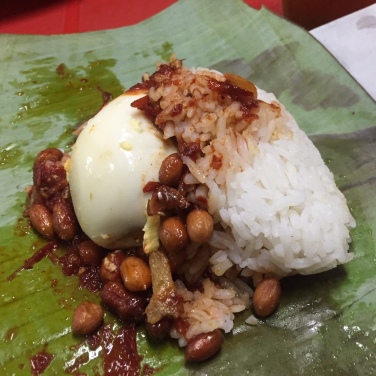 We then stopped quickly at a fruit stand. I’d seen Durian all over during my first trip to Asia but I’d never tried it. It was very sticky and very stinky, as per its reputation. So sticky and stinky that we wore latex gloves while eating it to make sure people wouldn’t shun us for the next few days. Durian is the pointy fruit that you see on signs at the airport, telling you they’re not allowed on flights. It was fine, but, in my opinion, not worth the stick and the smell, when there were other awesome fruits to try, like rambutan and mangosteen, two fruits I loved while I was in Thailand.

My favorite was the final stop, K.R. Mani, for some Indian food. As I’m heading to India this week (ahh!), it’s a good thing I love Indian food as much as I do, though this was not always the case. We ate tons of different roti (breads), chutneys, and curries. I didn’t want to stop eating, but of course I had to at some point or I wouldn’t have been able to walk back to the van. 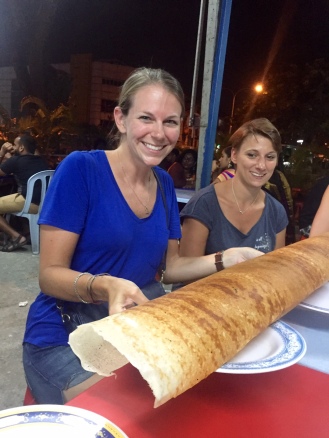 I’m not sure if this is done on all tours, but everyone on mine was staying in the same relative area, so we were dropped off at our hotels once the night was over. I definitely appreciated this as I’d had trouble getting cabs aside from when I was on wifi and could use my Lyft app. As much as my belly was full, on the way to our hotels, Charlie stopped at what appeared to be a homeless shelter and dropped off our leftover food, which also filled my heart.

Ribuan terimakasih, Food Tour Malaysia, for the special rate. Opinions are always my own. (Seriously, I’m a Taurus.) At the time of this post, the “Off the Eaten Track” tour is RM 160, or about $40 US.