Maybe this isn’t the perfect outlet for this, but sometimes you need to write in order to process things. Arguing about politics is not my favorite,  and that’s not the intent of this. I’m pretty sure that the only one of my friends who proudly voted for him doesn’t read my blog, and I’m not afraid of shocking anyone else by sharing the news that I am devastated about the election results and feeling very alone on the other side of the world right now.

I voted for Hillary – and not just because she is a woman or just because she isn’t him – I proudly voted for Hillary. I mailed in my absentee ballot in October, before I flew out to India. I am an emotional person in general and sometimes hate that about myself, but when my eyes welled up while I used my black pen to cleanly, completely, diligently fill out the oval connected with her name, I wasn’t ashamed of it. I took the time to recognize the historic moment and the way I felt being a part of it. My parents asked me what was going on and I said with a lump in my throat, “I just voted for a woman to be president,” and I felt like a freaking rockstar.

Then I packed up my bags, pinned my Hillary button on my Patagonia backpack, and left. I relaxed knowing that the only thing in life making my blood boil since July would be gone by the time I returned home for Thanksgiving. I’m currently 10 1/2 hours ahead of time from most of my friends and family, so while the voting was just starting in the States, I went to the bar with my one other American friend here to see if we could watch the news together. Instead of showing any news, the bar was playing cheesy music videos from the ’90s and we laughed about how this was what this particular bar in India was seeing from the States instead of the first female president being elected. We went to bed.

And then we woke up. The first thing I heard was “Um. It’s close.” and we were in disbelief. I had a few panic attacks as more and more information kept coming in. I texted my family for updates. They kept saying it wasn’t good but weren’t saying much, as if they were trying to protect me, as if I were a child. And then I cried, as if I were that child. It was called a few hours later and it was over and my parents and sister and all my friends were asleep and I didn’t have wifi and I was halfway around the world and could not be comforted.

I needed a beach. I was dropped off where I thought one was but once I got out of the car and started to walk, it was clear I needed to be elsewhere. “The beach is a 20-minute drive away,” people said when I asked which way it was. Then some people asked me if I would pose for a picture with their children. This is very common practice in India (and Myanmar I found), for people to take pictures with travelers, even without a conversation beforehand. I said, “No. I’ve been crying. Today is a bad day.”

The next person I asked about where to go for the beach looked at me, said, “are you alone?” and when I nodded said, “come with me.” She left her children at the stand where she was selling water and coconuts, pulled up on her motorbike, and motioned for me to get on with her. I hesitated for a split second, then shrugged my shoulders and hopped on. What more could go wrong on this day?

I rode on the back of her motorbike for the next twenty minutes with the wind blowing through my hair and felt at peace. This kind woman took me – a complete stranger about whom she knew nothing – to a beautiful beach where I could calm down for a few hours while staring straight into the ocean. I kept thinking about what life would be like if everyone could have experiences like this.

When I went to get lunch on the walk down to the beach after my motorbike ride, I went somewhere specifically because there was a wifi sign. I continued refreshing CNN, just in case there had been some mistake. The owners there were so excited to see me, although there were other travelers around as well. They asked me what my name was, if I could recommend them to my friends here, and what they could do for me in the future. One of them who hadn’t been talking to me with the rest asked if I was Russian. I hesitated, embarrassed to admit the truth, but said I was from the States after all. There was thankfully no follow-up.

After a whole life of being proud to be an American, I suddenly feel weird about it. I especially felt good about it in Myanmar, where I’d be stopped every few minutes while walking so that people could find out where I was from. The conversation always went like this – Them: “Hello! Where are you from?!” Me: “Hi! I’m from America – the US.” Them – “Obama! We like Obama!” Me: “I like him, too!” 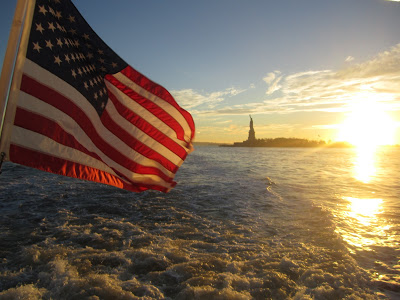 I feel like I should be at home right now – as I felt last month when bombs were found in New York a few avenues away from my old apartment and as I felt when Hurricane Sandy was threatening the beaches where I grew up. I feel it’s not fair to my friends and family members that I am away while they are there experiencing this in real time. I feel removed. I feel disconnected, which is why I spent $50 in international data yesterday commiserating with my friends on Facebook.

Even though I feel like I should be at home, part of me also wants to avoid the inevitable second realization that this is all true once I get there in two weeks. I’m not using the old empty threat of moving to Canada, but as I’m already living a little unconventionally right now, it’s, “maybe I will extend my trip, maybe I will travel for longer than I was going to”. When I mentioned this to my dad, he reminded me that while I should absolutely continue to travel, they need people like us back home, to help make things better in any way we can.

I don’t know what way that is yet, but I will figure it out when I am back. Right now, I want to be coddled. I want to be taken into someone’s arms and rocked gently like I am a kid again. I want to sit on my couch in my pajamas and put on a mid-series season of Friends and watch it until I fall asleep. I want to eat ice cream. I want to hug my dog. But instead of all this, for right now, I will try to be the best representative I can be of the US while I’m over here. 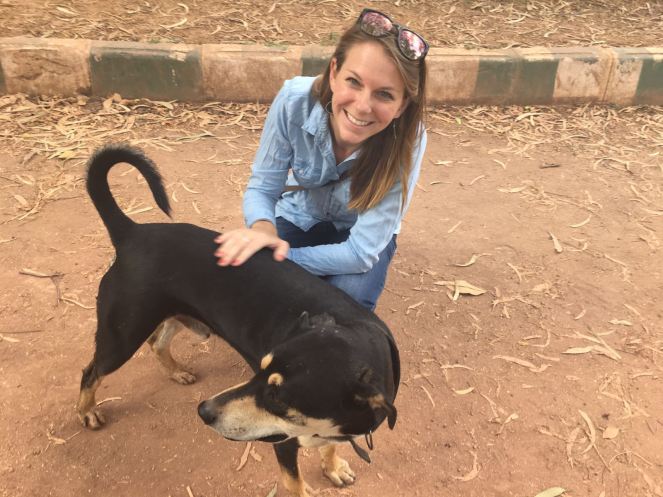 I will pet the stray dogs in Goa for comfort. I will smile when people stare. I will allow others to take pictures with me, even though I don’t feel super comfortable with this practice. I will say, “Yes, please, and one with my camera, too.” I will explain the Electoral College to more locals here. I will answer more curious people’s questions. I will not become impatient when the Indian government gives two hours of warning that all 500 and 1000 rupee notes are now completely worthless and ATMs are closed for the next two days. I will not fight back when I am shoved on a bus. I will not become frustrated when I am not understood. I will tell people that I am an American and show them that we are good at heart, just as they are. 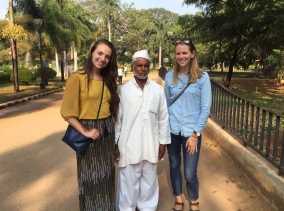