It’s no surprise to anyone who’s read this blog before that I LOVE street food. If you’ve been reading long enough, you may even remember when I went for a whole weekend in NYC eating exclusively from food trucks, thanks to a challenge from one of my cousins. When I found out that there was an entire street dedicated to street food in Bangalore and that it was even conveniently named Food Street (or Thindi Beedi), I knew I had to spend a night there.

A night on Food Street is a little like a day at a food truck festival in NYC, except it’s open every evening, it’s all vegetarian, and everything’s under a dollar. Some of the food trucks in NYC charge $15 for a meal, for comparison, which is absolutely insane, I now realize. Food Street is about a regular city block’s length which is perfect. If it had been any longer, I wouldn’t have been able to try anything additional because my stomach can only hold so much. If you happen to be concerned about food poisoning when you travel, this street’s food is known to be hygienic and fresh. Everything is made right there in front of you and comes to you steaming hot. So put your Pepto Bismol aside and just go for it.

I went to Food Street with two of the other Leave UR Mark volunteers and our community manager. Three of our local friends met us there and helped us out by choosing everything we were going to eat, generously waiting in line and paying for it all, and explaining what it all was. Out of 15 different food items, there wasn’t a single one I didn’t like. That’s basically statistically impossible.

What I ate the most while in South India was dosa, which I typically ate for breakfast. In the simplest of descriptions, a dosa is a thin, crispy, pancake. It’s sometimes folded over, rolled up with vegetables inside, or in a “shortstack” of smaller and thicker pancakes. It is served with different chutneys. In India you use your right hand to break a piece of the dosa off and pinch some of the filling and/or the chutneys into the dosa to eat. We ordered three different versions of dosa that night – masala dosa (with a spicy potato filling),  rice dosa (with a rice filling) and set dosa (the “shortstack”). Yes, I did bring back three packages of dosa mix to the States so that I can enjoy them with my family at home. 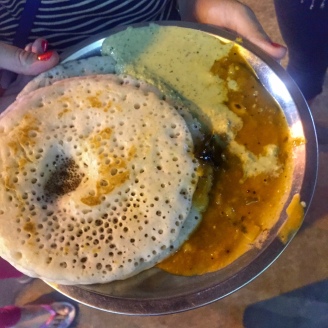 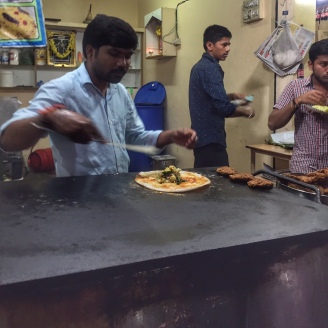 Another dish widely eaten at breakfast that we also had that night on Food Street is idli – a thick, spongy, lentil cake. It is similar to dosa in that it’s served with different chutneys, but I prefer dosa, so I only had this one other time while in Bangalore.

We then sampled a dish called vada pav, from the Maharashtra state (pictured below). The “buns”, as I’m calling them, tasted kind of like potato buns from back home and they were filled with a potato filling as well. Since mashed potatoes are my favorite side at Thanksgiving, I ate a lot of this dish. It also helped that I was holding the plate this time around. This dish was also served with tons of peanuts, which I’ve learned taste good with everything. I later found out vada pav is the most popular street food in Mumbai, another city I’d like to explore one day.

Our one friend ordered us two traditional dishes from Rajasthan, a state in the northwest of the country that borders Pakistan. Rajasthan looks incredible to visit based on the photos of my friend Brian, aka @isthisreal, who I met on the Goa portion of my trip. One is a food that people in and from Rajasthan eat every Sunday called dal baati (pictured below). Dal means lentil and baati is balls of wheat. It reminded some of us of stuffing, and who doesn’t love stuffing?

People back home keep asking me how I handled the spices. Aside from when I accidentally ate chilis, nothing was too difficult. The spiciest thing on Food Street that we sampled was actually the least Indian thing there – a kebab stick with twisted potato that you’ve probably seen on the boardwalk. It had a powder on it that made me grab my water bottle quickly, but I also couldn’t stop eating it because, hi, potatoes.

Somewhere along the street was a gentleman making Romali Roti by tossing it up into the air like it was a pizza and then heating it up on a round stone. We saw him doing this before we’d had anything to eat and then we ordered one ourselves to watch him (and Snapchat him) again. It was served with a chuna chutney. Chuna means “chickpea” which I knew because I know a Yorkshire Terrier back in NYC named Chuna.

If I *had* to pick a least favorite item it was the falafel we ordered last minute, and I think that’s just because it was the least exciting. I’ve had plenty of falafel in my day so I preferred the new-to-me-tastes instead.

Though it was hard to decide, my favorite dish we tried was holige, a crepe with coconut and cinnamon baked into it that on first bite (and second bite and third bite and so on) reminded me of my all-time favorite cereal, Cinnamon Toast Crunch. When we were handed that by our friends, we were also handed a similar dish, a crepe made of lentils. This may also have been a type of holige. It was also pretty sweet, which I hadn’t expected from lentils.

Another dessert was from a huge pot that a man was stirring slowly. It was vermicelli pudding, aka Seviyan Kheer, and I absolutely burned my tongue on it and then kept going in for more and burning my tongue again. I am a slow learner when I am also hungry.

One of our friends asked me if I’d ever eaten rose petals, and I told him that I hadn’t. He brought me back a dish with rose petals in a jam over banana, grapes, apple, and some other fruit I didn’t recognize. I’d never even realized people eat roses, but maybe because the smell is so familiar, the taste to me was exactly what I expected. 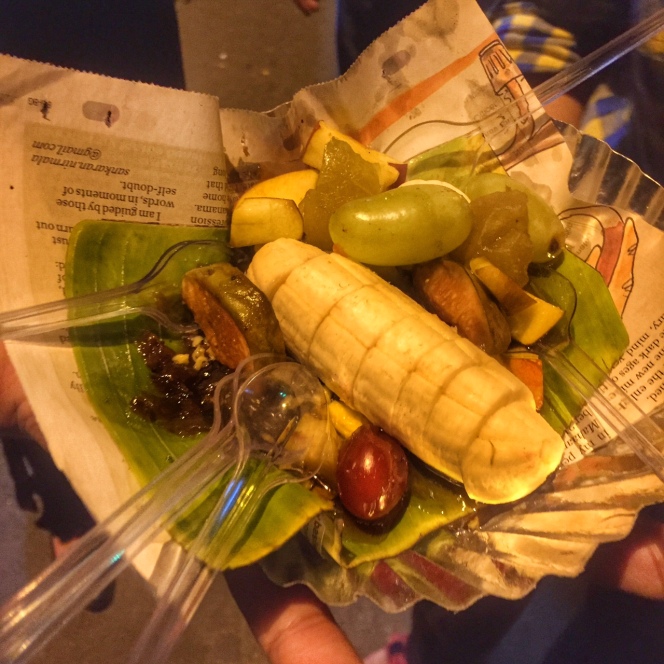 Right after that, we saw popsicles on a truck at the very end of the street and thought we’d test our limits with one more treat. One volunteer ordered pistachio and two of us had rose, after having enjoyed the rose petals from the previous dish so much.

If you go to Bangalore and don’t make it to Food Street, you’re doing something wrong. I already feel regretful for only going there once in my time there and am currently jealous of someone I know who is in Bangalore now and is able to still experience it. Please bring me back some holige if you can!

This post was written during my time with Leave UR Mark, a social enterprise in Bangalore, Goa, and Mumbai that connects travelers with local internships and volunteer opportunities in India. Opinions are always my own.

{Thanks to @andrew_talty90 for the holige pictures!}