When I woke up at 3 am on my final morning during #escape2goa in Goa, India to drive to a field a few naps away, I did it to take pictures of the other bloggers. Taking a hot air balloon ride didn’t seem like my thing. It’s an activity that feels kind of “luxury” to me, and because of that, not something I’d normally spend money on. That’s true, but the main reason, I’ll admit, is that I was just too scared to fall.

The fear of falling is different than a fear of heights. I don’t mind being on the top of buildings or on airplanes – I enjoy a good view. I become nervous about it when there’s not a railing, a seatbelt, or a safety net. I’m one of the clumsiest people I know, and if I didn’t know my dad, I’d be the clumsiest. If falls happen when I’m walking normally sometimes, wouldn’t they be more likely to happen and hurt more if I’m higher up in the air?

I don’t know where this fear comes from, but it’s always been there. I never jumped off the diving board in my friend Jessica’s pool. I never jumped off the roof of her parents’ shed like the rest of our neighborhood crew. But I did try pole-vaulting in high school. I never got too high, and part of the reason is because I had a pretty bad fall that left me with a badass scar next to my right eye that you can still feel an air bubble in if you squeeze it. I was too scared to try too hard after that, but I hadn’t really been strong enough before the fall anyway.

I recently realized that it’s possible my fear of falling *physically* also translates into a fear of falling *metaphorically*.  I have notebooks full of scripts from when I wanted to be a writer, director, and producer in high school, but I didn’t apply to film school. I want to be on the Amazing Race, but I’ve never made the video with my sister that would get us there. I want to write for actual travel publications outside of this blog but I’ve never pitched to anyone. I want to make a podcast.

But back to Goa for a minute. Before the sun rose completely, we watched as the crew of Tiger Balloon Safaris slowly inflated the gigantic black-and-orange striped balloon with basket attached. When everything had been lying on the grass, we weren’t sure what it was going to look like, but all set up and afire, it looked legit. This wasn’t some backyard operation. 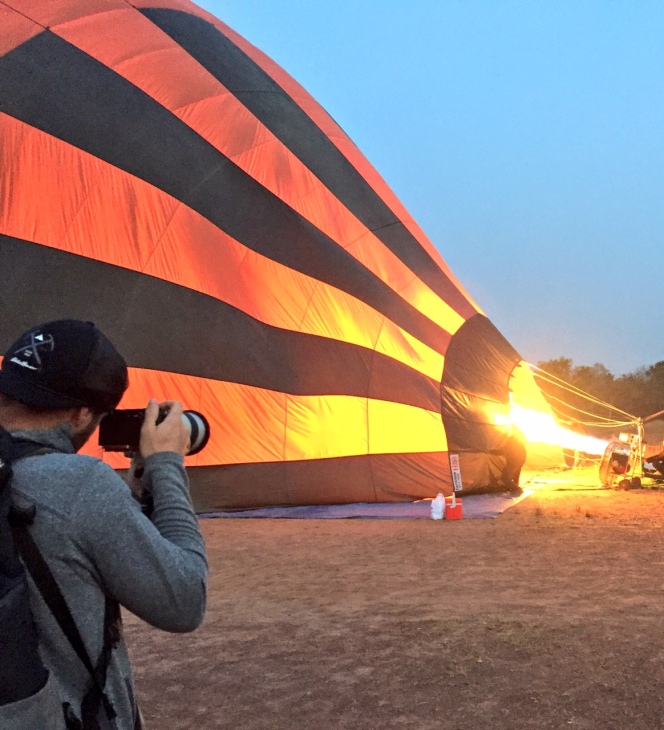 The bloggers got in the balloon and I was thankful there was no more room for me, in case someone had said, “We can fit one more! Erin, get in!” The balloon took off and as I watched, I wondered what it was like. I wondered why no one else had seemed scared. I wondered why everyone else was pretty much killing it at the blogging/vlogging/photography game and I was mostly writing because I liked it. I decided that it is because these people aren’t scared of falling and just reached for what they wanted – in the hot air balloon and in their blogging careers.

There wasn’t a guarantee that there would be a second flight as it all depended on where the first flight landed. Watching the balloon float above me in the gorgeous sunrise light, I started to accept that once again I’d missed my chance for something great because I was a wimp. Earlier in the trip, I’d declined a motorized-paragliding ride over the ocean during sunset for the same reason.

The hot air balloon landed in a field where children were just heading to school and they were so excited to greet everyone. It turned out the field was where they’d wanted to land so the balloon was going to rise again. Everyone was smiling who had gotten out of the basket and I made the decision to just go for it this time. I hopped in so that I wouldn’t again have the regretful feeling I’d had while watching the first flight, or when talking to the bloggers who had done the paragliding activity after their ride.

We rose slowly, floating gently into the sky and it actually wasn’t scary at all. Since the basket was emptier than on the first flight, we were able to play around a little bit and get closer to some trees than I might have liked, but nothing happened. I felt safe, I felt wonderful, and I felt thankful that, at least for this time, I pushed my fears aside. We didn’t fall. We didn’t tip over when we landed. I didn’t drop my cell phone while I took pictures. We just…soared. 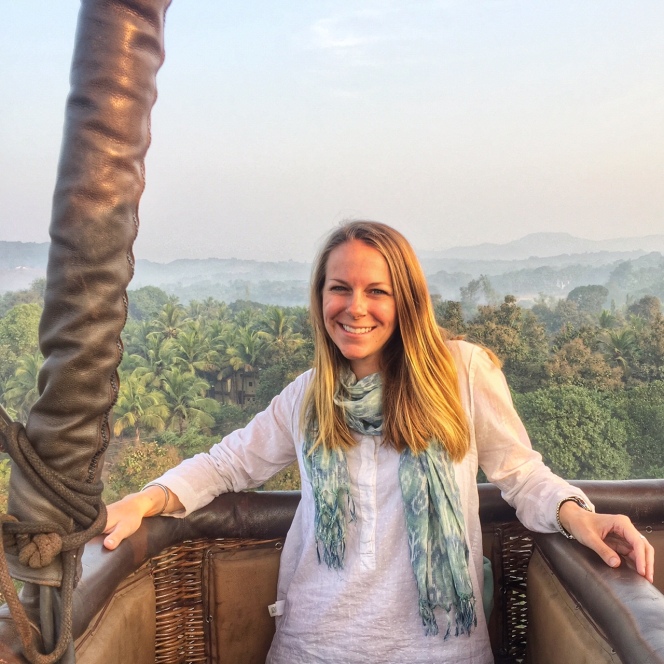 And I’m going to reach for new heights literally too, because I liked that flight above the palm trees. For starters, I’m hoping to include lots of hiking on my 2017 trips, kicking it off with an exciting climb on that new continent I’m visiting in February.  I might do a paragliding ride in my home ocean, on my home shores, to make up for the fact that I was too scared in India. And maybe, just maybe, I’ll jump off of Jessica’s diving board, once and for all.

My friend, Nienke, explains the logistics and how to book your own hot air balloon experience on her blog, The Travel Tester, here. If you speak French or just like looking at awesome photos, Megane has some great ones from the ride on her site, Meg and Cook, here.

I was in Goa, India to work on the Goa Department of Tourism’s #escape2goa project. Opinions are always and forever my own.