When I first traveled to London, to visit a friend from work on a short-term assignment abroad, it was my first time traveling outside of North America in years. At that point, I didn’t know how to initiate trips, who to travel with, or that I was allowed to spend my hard-earned money for something other than rent. The U.K. was my second time in Europe, those many years ago. And earlier this month, London was the first European city that I revisited.

This time around, I was there for a wedding. One of my oldest friends, who I used to direct movies with as a kid and gossip about our enemies with during choir practice, was getting married in the English countryside to a British gentleman we’d met one evening in a bar while working on a crossword puzzle, which is a totally normal thing to do in a bar on a Saturday evening. Since I’d played “tourist” in London a few years ago and followed Rick Steves to a tee, I didn’t feel the need to do “all of the things” this time, but I still did “some of the things.” 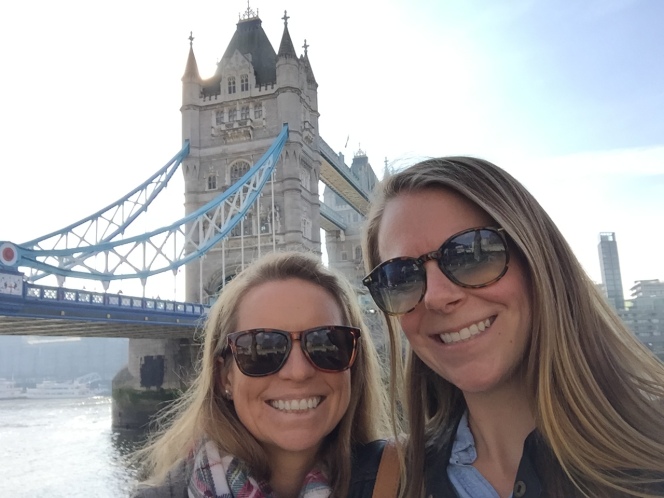 Emily and I walked around the waterfront when she first arrived, taking pride in the fact that we were the first cousins to travel internationally together and sending pictures back home to our family Google group. We walked across the pedestrian Millennium Bridge, famous for having been destroyed by Dementors in Harry Potter, and named after the Backstreet Boys 1999 album – or was it derived from Will Smith’s “Willennium”? I can’t remember.

Continuing along the waterfront, we walked past the army green Southwark Bridge (we will never be able to pronounce “Southwark” like a local) and the drab London Bridge, which of course, was not falling down. We chose instead to walk back across on the iconic and beautifully baby-blue-accented Tower Bridge.

I don’t want to travel with anyone who is too cool to take a picture with a red London telephone booth and luckily, Emily did not deny me of this touristy practice.

I’d climbed up the 528 steps to the dome of St. Paul’s Cathedral when I first visited and it was an accomplishment and a good view, but I didn’t need to spend £18 to do so again. If I’d only been coming to London on my trip, sure, but right now I need to limit myself in terms of what I pay for sightseeing. The awesome thing about London is that while the things you pay for are quite expensive, there’s a ton that you can do for free. So instead of getting the full-access pass to St. Paul’s, we walked into the back of the church and made our wishes.

Our Airbnb in Victoria was in the perfect spot to keep coming across two additional icons of the city – Big Ben and the across-the-way Westminster Abbey, which is where the royal weddings are held, including Liz + Phil, Chuck + Diana, and Will + Kate. These are other attractions that you could wait in line for and pay to enter, but I’d been to Westminster and I just like looking at Big Ben, so I was fine with observing them from the outside. 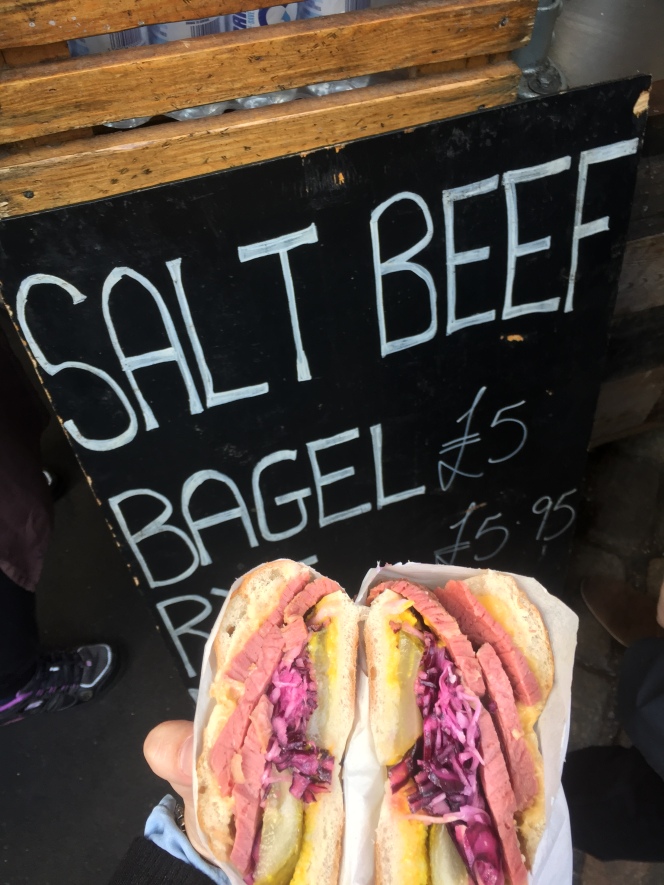 Everyone and their mums should make an effort to go to Borough Market, an awesome collection of food stalls. Emily and I wandered around, in search of lunch. We ran toward the stalls with slate boards covered in little chunks of cheese or with wooden boards with olive oils and chunks of bread to eat all of the free samples. When the samples weren’t enough, we split a Brick Lane Bagel with salt beef and cheese because we couldn’t stop staring at it once we walked up. I know what you’re thinking – “What, Erin?! You went from NYC to London to EAT A BAGEL?!” – but you didn’t see them. You didn’t smell them. You didn’t taste them. We also split the largest brownie I’ve ever seen with a name I hated but oh boy, I would have kept ordering them forever – the Naughty Brownie from Olivier’s Bakery. 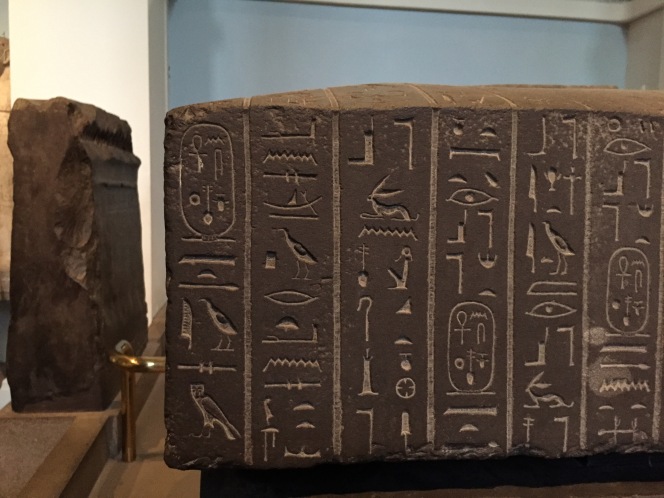 The British Museum, like many in London, only charges for special exhibits, but donations are recommended. I’d spent lots of time there when I was in London before, raving over the Rosetta Stone, the Egyptian relics, and the gorgeous frieze from the Parthenon and other treasures the British stole from the Greeks (that the Greeks want back). I only took a few pictures while here, but when I looked back at my pictures from the first time I visited, it turned out that I took pictures of the same things. What struck me then struck me still.

My first night in from Cape Town, I had plans to meet up with an old coworker. Just like my friend I stayed with years ago, this coworker also came here on a short-term assignment but he stayed an extra three and a half years. We went to Marylebone, what my friend called “The West Village” of London (and what Emily pronounced as “Mary Le Bone”). Beers were had at Gunmakers because you have to visit a pub while you’re in the U.K. Then we met his girlfriend for dinner at Fairuz, a Lebanese restaurant, for some hummus and Shish Tawouk (Boneless chicken marinated in garlic, lemon juice and home spices). It was great to catch up, especially with someone who I not only worked with in New York City, but also in Delaware, which seems like a flash in my memory at this point.

Emily, Jordan, and I went to Kingly Court in Soho for dinner one night and all commented on how it felt like a place we’d find in New York – a multi-level building with a courtyard and restaurants on every side. We chose Whyte & Brown, a free-range chicken place with a menu we couldn’t stop reading. While I don’t normally order chicken when I’m out, I knew this would be way better than what I could make at home. As an appetizer, we split the burrata with roasted delica pumpkin, rocket pesto, toasted pumpkin seeds. Emily and I both ordered the roast chicken crispy burger with gravy mayo, crispy chicken skin, sage & onion relish. We kept talking about that chicken (especially that skin) for the rest of the trip.

We met up with Jordan’s dad at The Churchill War Rooms, which I did not know about when I was first in London. This underground bunker is where Churchill and his team ran the government and defenses during WWII. I finished watching Netflix’s The Crown right before I left for this trip, beginning during Churchill’s second run as Prime Minister. I admittedly hadn’t been so interested in the Churchill parts of the series as in the Queen’s, but I found certain parts of the museum enhanced by my knowledge of these things in his life learned from the series – like his paintings, or the commentary from members of his team about how difficult he was to work with. It’s a place you could’ve spent hours and that I took a lot away from.

The Changing of the Guards at Buckingham

Though I’d visited the outside of Buckingham Palace years ago, when we walked by this time, they were doing a changing of the guards. I don’t think it was the full ceremony as it wasn’t at the right time and did not last longer than a few minutes, it was still cool to see. Three guards march out, the one in the middle is dropped off, and the guard who was just working gets in the middle again for them to march back to wherever they go when they are not staring into space.

I’ll be in London a third time and a fourth time, and maybe even a fifth time. I know I’ll be able to find new things with each trip, but I do hope that I’m never too cool to take a phonebooth photo.

What are your favorite things to do in London? Leave me some tips for next time in the comments!