Renting an apartment instead of a hotel is a great way to experience a destination as more of a local than as a tourist. Many travelers these days turn to Airbnb, but I recently discovered a company I’m referring to as a localized Airbnb: Ambiente Apartments in Bratislava, Slovakia.

On my six-week trip, I stayed in eight different Airbnbs. They were all “fine”, but I did run into a few issues. In Prague, my apartment wasn’t cleaned up yet from the previous guest so I had to drop my stuff off and go for a walk. The internet didn’t work the whole time, which was just one of my frustrating wifi issues of the trip. In Berlin, during a busy time for the city while the world’s largest tourism event, ITB, was being held, I kept being rejected from apartments because the owners had lists of people requesting to book who were staying longer than I was. By the time I finally found something affordable that would accept me, it ended up being a private room instead of a place of my own, which I’d never done before and was kind of nervous about. For my place in Paris, I had to record a video of myself (on, once again, limited internet) in order to properly verify myself for the gentleman who owned the place. He hounded me for a 5-star review as soon as I left even though I had 1,000 things to do (including writing this post) when I returned to the States.

When I checked in, I was provided a map of the town and the woman at the desk circled all the things I should visit during my time. She recommended a local red wine and a biergarten across the river, which I appreciated. We walked up to my apartment, in the same building, and she showed me how everything worked. Not every apartment is right in the area, but Ambiente Apartments offers free Uber rides to where you need to be. Also, pro tip for Bratislava: use Uber instead of taxis because I was ripped off by my driver who charged me €15 for what felt like a 5-minute ride. 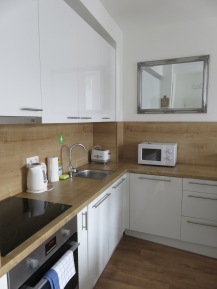 The apartment was adorable and had everything I needed – a comfortable bed, a couch, a coffee table, full kitchen, and a balcony. There was also a washer. While I didn’t use it on those particular days, as a long-term traveler, I greatly appreciate the availability of these. When traveling, you’re going to end up wearing the same five things over and over again no matter how well you pack. A washer is necessary for anything over two weeks if you plan on talking to other people throughout your trip and not turning them off with the smell of your clothing. 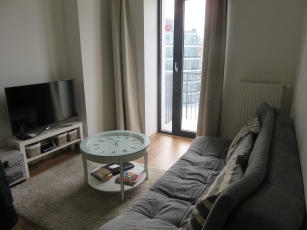 My Ambiente Apartment was the only place I was able to get some solid writing done in my entire trip. The awesome wifi helped, as did the couch. For the only time during my trip, I put the TV on in the background to help me concentrate and opened the balcony doors for a breeze. The TV had hundreds of channels, and I didn’t find any in English, but I did find some American shows dubbed with Slovak, which made even The Big Bang Theory tolerable.

Bratislava is a small but charming city, only an hour from Vienna and two hours from Budapest. If you’re in the area, definitely make an effort to stop by for an adorable old town, a beautiful castle atop a hill, tasty and unique traditional food, and a stay in a serviced apartment from Ambiente Apartments.

Dakujem, Ambiente Apartments, for hosting me in Bratislava. Opinions are always my own.