I loved being away on my last trip, but traveling wears me out. Not sleeping in my own bed, being uncomfortable on buses and trains, and walking five to 15 miles a day drains me of energy. By the time I arrived in Dresden, I was müde. Luckily, I was staying at luxurious Swissôtel where I knew comfort and relaxation was in my future – I mean, there was a “pillow menu,” after all.

Swissôtel Dresden is in a historically significant location. It was formerly home to the court architect of Augustus II the Strong (a powerful dude – the final Elector of Saxony, who became King of Poland and Grand Duke of Lithuania). The home became a boarding and training school and was destroyed, like so many others, in the bombings of 1945. The hotel opened in the restored building in 2012. The exteriors (12 facades from different areas) and interiors (carpets designed with influence from tiles laid in Dresden back in the day) pay homage to the building’s history. 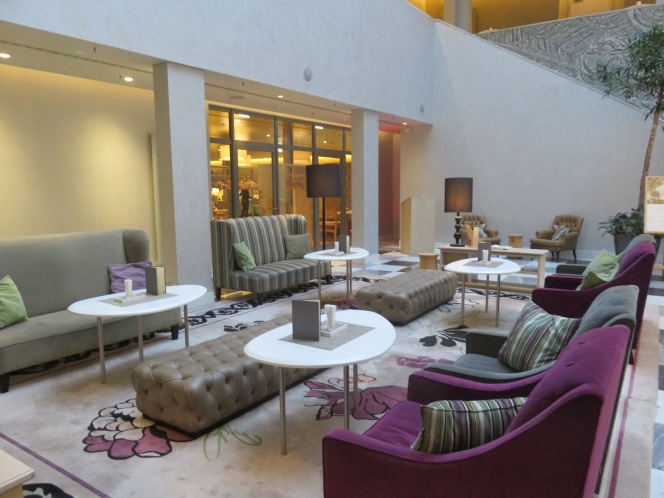 Having been to Switzerland a few years back, I know firsthand that the Swiss know how to do things – mountains, trains, and hotels. But my absolute favorite part of the hotel was the most Dresden part of my room. I had an amazing view of the famed Frauenkirche, built in the 15th century, leveled in 1945, and rebuilt to perfection from 1994-2005. If I zoomed in closely enough with my camera (as I had on the penguins in the distance in Cape Town), I could actually see the faces of people who had climbed to the dome. Was this creepy of me to do? Yes. Could I resist? No. When I climbed up to the dome during my stay, I tried to find my hotel room to see if people could see me like I could see them, but I wasn’t quite sure which window it was. 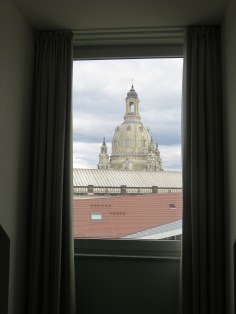 Even if I hadn’t had such an incredible view, I would have been very happy in this room. The bed was like sleeping on a cloud, and I ordered my favorite pillow from the aforementioned menu.

There was an awesome workstation in the corner of the room, which I’m longing for right now – especially as I’m typing this from a toddler-sized chair and table in the children’s section of a library because it’s the only place I could find an outlet. 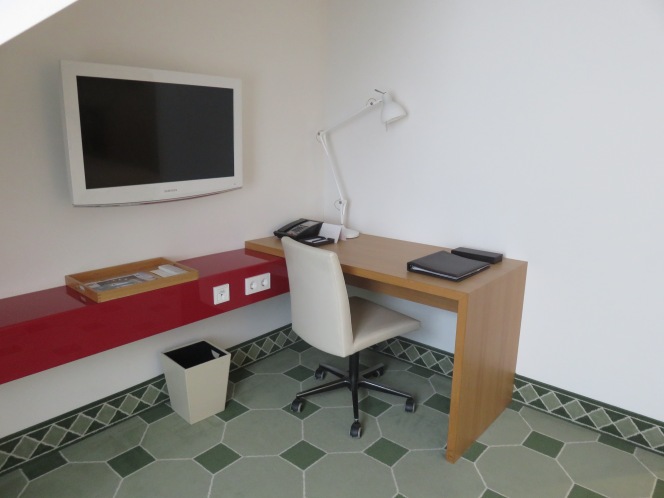 The bathroom was sleek and modern. The rainfall shower head was everything I wanted after having to hold one up myself in so many of my accommodations over the prior weeks.

I accidentally slept later than I intended to both mornings, thanks to the heavenly bed and the blackout curtains. This was no problem, because I needed that deep sleep and breakfast was open late each morning so I could go overboard at the buffet. Of all my hotel breakfast spreads in this trip, Swissôtel’s was my favorite and the most varied. Best part? You could spoon your honey out from an actual honeycomb into a miniature ice cream cone. I didn’t even drizzle the honey on anything on my plate, I ate it like I was a cartoon bear. And yes, I ate the cone. 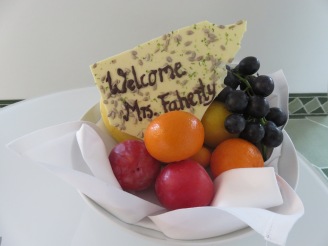 It was rainier in Dresden than anywhere else on my tour, but since I was in the heart of Old Town in Swissôtel, that didn’t stop me from getting anywhere. There were several dinner (and chocolate mousse!) options within a five-minute walk. The umbrellas in the front lobby helped get me where I wanted to be without getting soaked.

I don’t typically indulge in spa treatments, but had I known the spa was in a 15th-century stone cellar, I might have reconsidered. Some spa products come from French Guinot, a company that doesn’t test on animals and uses renewable plant sources. Others are from Pürovel, with natural ingredients grown in the Swiss Alps. Spa treatments range from a firming eye treatment to a private spa night, complete with Prosecco.

I was so thankful to have the opportunity to relax at the Swissôtel in quiet Dresden before my next destination of bustling Berlin, where I was going to feel awkward for three days, accidentally staying with a person in their home because I hadn’t scheduled something far enough in advance. He did not have a pillow menu.

Tausand dank, Swissôtel Dresden, for hosting me. Opinions are always my own. #LiveItWell