I took a break last weekend from my current dog-sitting gig in Chicago to head to Madison, Wisconsin for two days. I’ve been spending the month just an hour away from a state I hadn’t yet visited, and had someone who could watch the dogs for a night so I couldn’t resist. I kept hearing good things about Madison and I’d specifically heard a lot about the Edgewater Hotel so I wanted to experience it for myself.

The previous weekend, my NYC-turned-Chicago friend Kristyn and I had been out for the Derby with a bunch of University of Wisconsin graduates. They gave us their tips for Madison (every single person mentioned fried cheese curds and New Glarus Spotted Cow beer) and when they heard we were staying at the Edgewater, each said, “ooo, it’s so nice there!” Kristyn’s Badger friends were not wrong.

After a three-hour bus ride and a quick brunch at Bassett Street Brunch Club, Kristyn and I walked over to the Edgewater. As the name indicates, the hotel is on the edge of the water of Lake Mendota, one of two lakes that surround the isthmus that Madison sits upon. The view is absolutely gorgeous, and you can see the lake from the windows of most of the 202 guestrooms (including ours). Additionally, our room had everything you’d want for a getaway – two comfortable beds with four huge pillows each, a gigantic TV, a mini-fridge, executive desk, a large walk-in shower, and a toilet separated from the rest of the bathroom. 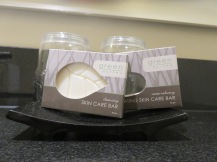 The Edgewater has been on the shores of Lake Mendota since 1948 and underwent major renovations in 2014. Kristyn and I have now joined the ranks of Elvis Presley, Elton John, Bob Hope, Bob Marley, AND the Dalai Lama as former guests of the hotel. Interesting fact from our Uber driver, Marty: There is a plaque in Madison commemorating when Elvis himself broke up a fight during his final trip there, just two months before his death. 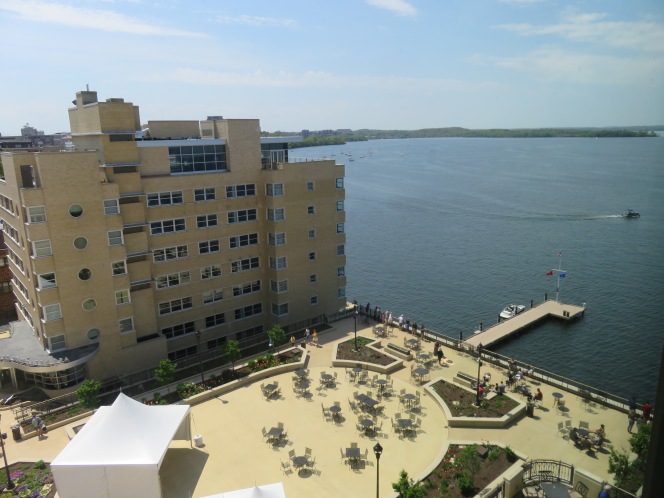 It wasn’t long before we came to realize that the Edgewater is more than just a hotel and is actually an important staple in the community. In between the two buildings of the Edgewater sits the lakefront Plaza, where many events are held for the public, including Bluegrass Fridays, outdoor movies, and workout classes. My favorite finding was that the Plaza even becomes an ice rink in the winter. The hotel usually produces three weddings a weekend, there are various meeting and conference rooms, and the spa is state-of-the-art, though it was all booked for Mother’s Day during our visit. Being on the edge of the water also means the Edgewater has 40 boat slips with complimentary docking during the day and opportunities for rentals and rides.

Aside from the obvious benefits of being on the lake, Edgewater is also in an ideal location within town. The isthmus that Madison sits on is only about 11 blocks across, so everything is within walking distance. We only took an Uber when we had to leave from the Greyhound station across the shores of the other lake, Lake Monona. The capital building (modeled after the White House), State Street (with lots of cute boutiques, restaurants, and bars), and the Terrace at Memorial Union (where we sat the second day with Spotted Cow and brat), were all within about 10 minutes of strolling. 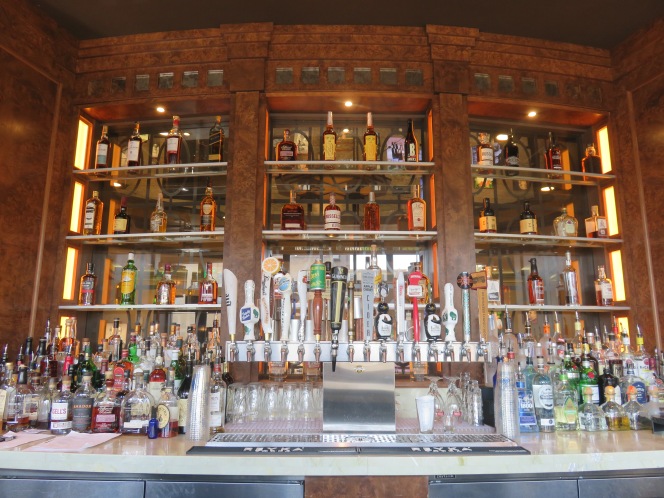 Back inside the hotel, Kristyn and I had happy hour at Augie’s Tavern and spent time with Terry the bartender, who told us a little more about Madison and gave us a few recommendations for dinner that night. We had some New Glarus Spotted Cow because “when in Wisconsin” and I tried out their east and west coast oysters. There are several other dining spots within the hotel, including the Statehouse for modern Midwestern inspired by the Great Lakes, the Boathouse for lakeside casual dining, the Icehouse for grab-and-go pizza and snacks, and the Café for coffee and pastries. 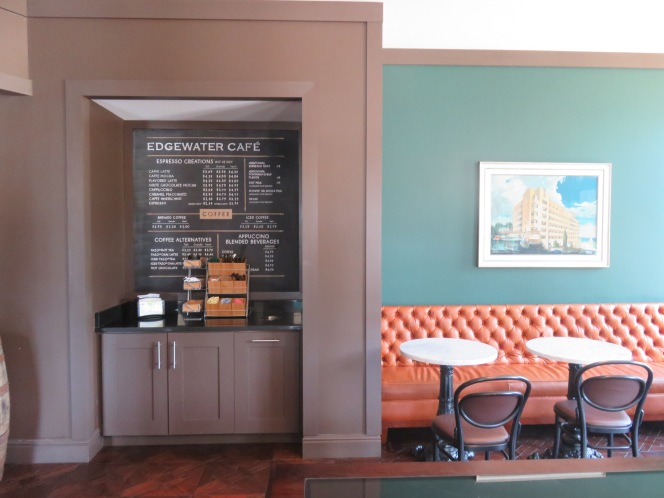 Along the media wall showing historical figures of Wisconsin and important moments in Madison history stand Kirsten Larson, Samantha Parkington, and Molly McIntire. For those of you who didn’t grow up in the 1990s – those are American Girl dolls and they mean more to me than they should – I even visited the AG store in NYC as an adult with my sister. When I asked about it, I was told that Pleasant Rowland, who started the American Girl revolution with Pleasant Company, is one of the owners of the Edgewater and that American Girl is headquartered just a few minutes from Madison in Middleton. I could have squealed. I may have squealed. 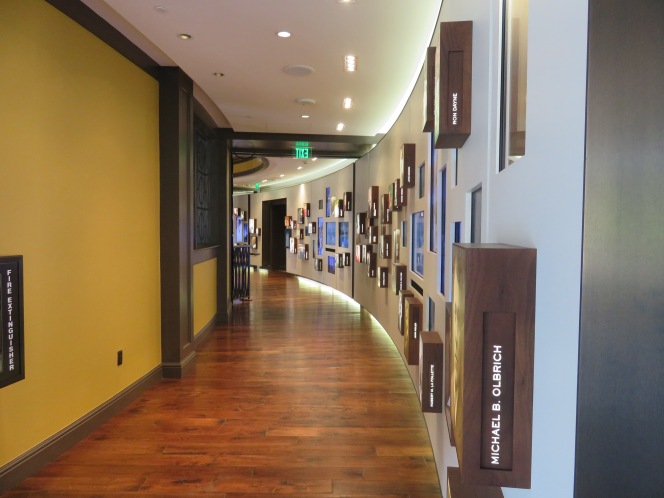 While I absolutely am in love with R and L, the pups who have taken me into their home and into their lives, it was SO NICE to be able to sleep a full night without them whining at the bedroom door to be let in and without waking up hours before I want to so they can go for a w-a-l-k. I slept SO WELL that night and while some of that has to do with the absence of the dogs, it also had to do with our comfortable room at the amazing Edgewater.

Kristyn and I both decided that if our respective future children don’t want to attend our alma mater, we will convince them to go to the University of Wisconsin-Madison so that we can return to eat fried cheese curds, drink Spotted Cow, and stay at the Edgewater whenever we want.

Learn more about the Edgewater and reserve on Booking.com here (affiliate).

This post contains an affiliate link, which means that at no additional cost to you, I earn a tiny commission when you purchase something (in this case, a night at the hotel) so that I can continue to bring you great travel content for free!

Many thanks to our friends at the Edgewater for hosting us in Madison, for the cheese plate, drinks, and oysters, and for connecting us to Visit Madison to enhance our visit.