I’ve become sad leaving certain places in my life, most notably Myanmar and India, both countries meaning more to me than I could ever begin to explain. Of all places, I never expected to become emotional while leaving Indiana, but I had all of the feels. I had such a transformative week out there, which included spending time with my godparents, attending Bloghouse with 14 other incredible travel bloggers and 5 expert mentors, and exploring the underrated city of Indianapolis, adorable Hendricks County, and energetic Lafayette and West Lafayette.

Now that I’ve had my first experience as an adult in the awesome city of Indy (after three times as a kid/super-awkward teen), here’s who I think should visit Indianapolis. 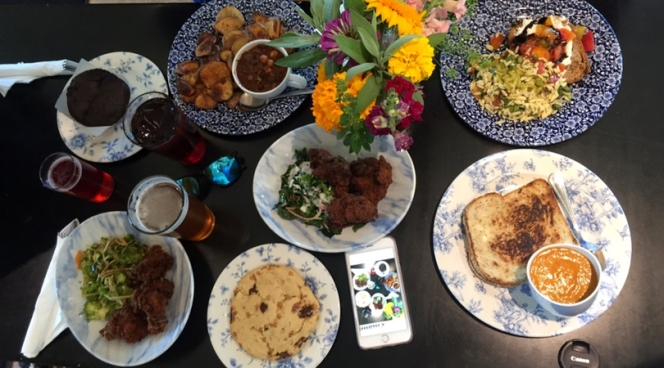 Indy’s prime location smack dab in the middle of a gazillion farms (by my estimation) means that Indy’s restaurants have fresh ingredients and frequently changing menus to honor what’s available locally. My favorites meals are below:

At Goose the Market, a butcher (with lamb bacon!) and deli (with specialty foods, wine, and craft beer!), I had a mouthwatering Batali sandwich with coppa, sopprasetta, provolone, romaine, house-marinated red onions, spicy giardiniera, mayo, and tomato preserves.

Vida, a newish hot spot in Indy with four- and five-course tasting offerings, provided me with an entree of tortelloni with mascarpone, potato, truffle, asparagus, candied red onion, brown butter, and sage that made me want to lick the plate.

A few new friends and I lunched at Public Greens in Broad Ripple. While they have plenty of vegetarian and vegan options, I opted for the fried chicken and the “Berry Larry” salad with kale, mixed berries, kohlrabi, and Gorgonzola dressing. I had zero regrets. 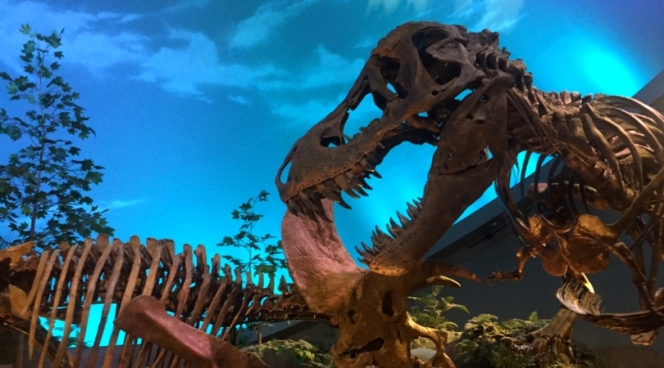 I might be biased because I remember visiting both attractions as a kid, but Indianapolis has two of the best family attractions I’ve ever come across, and yes, I’m including Disney World in my assessment. We can talk about that later.

Zoos can get a bad rap these days, and I understand that, but the Indianapolis Zoo has tons of conservation initiatives and is on the right side of history. While we were at the zoo, we spent the most time with the dolphins. Mandy, the trainer, noted that they never punish them for not doing their tricks and it’s quite clear that the people who work at the zoo are there because they love the animals.

At the Children’s Museum of Indianapolis, we were guided through the exhibits right as everything was closing for the evening. I kept wishing I could stay longer and be there again when my precocious 5-year-old cousin would visit the following weekend. I knew she was going to love it. A few exhibits especially stood out. I loved the “Take Me There: China” exhibit, where they feature EVERYTHING you need to know about China – calligraphy, chopsticks, instruments, pandas, and more. The exhibit’s message, one SO IMPORTANT today, is “When we get to know how people in other countries live, we can accept that they have different sets of beliefs and values that are neither ‘good’ or ‘bad,’ just different.” The museum is going to switch countries every four or five years, and I can’t wait to see what they do next. India, perhaps? One exhibit that my cousin is not old enough for yet, called The Power of Children: Making a Difference, featuring the life and lessons of Anne Frank, Ruby Bridges, and Ryan White, was extremely powerful. And then there’s the dinosaurs, in an exhibit that has changed a lot since I dug for fossils as a kid, but still held the same feelings for me.

If my experience tells you anything, it should be that adults are going to enjoy these family-centric attractions just as much as the kiddos.

One of the most surprising things I learned about Indy during our time there was that you are allowed to carry an open beverage and drink from it in public. Say what?! If this doesn’t make it the perfect destination for party animals, the following reasons will.

The brewery that has been most on-brand for me than anywhere else I’ve ever been is in Indy and called Metazoa. Not only does it provide an outdoor drinking area in the sunshine, all the dogs you could ever want to pet, and awesome beer with animal puns in the names – it also donates 5% of their profits to wildlife and conservation efforts.

If you want to visit four breweries without paying for five different Ubers or getting behind the wheel yourself, Indy Brew Bus is the way to go. For $30-40, you’re taken in a small green bus to four different breweries in town. There are four different tours to choose from.

Indy’s craft beer is seeing a movement, but so are the craft cocktails. At Bluebeard, a bar/restaurant with Kurt Vonnegut inspirations, I enjoyed a smoky Galapagos drink with alipus mezcal, cabeza tequila, chili arbol syrup, bluebeard orgeat, cucumber, and lime. Ask me what all those ingredients are and I can tell you about the cucumber and the lime. Other places where other bloggers enjoyed cocktails throughout the week include Hotel Tango, Libertine, and Ball & Biscuit. 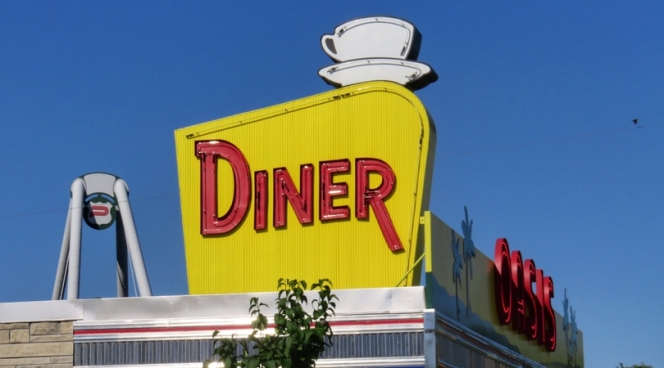 You can certainly fly in and out of Indy’s convenient airport, but I encourage you to rent a car and explore the surrounding area while you’re there. Indiana has a lot more to offer than just the capital city. This beach girl is excited to check out the Dunes at some point in the future as well as Columbus, known for its architecture, and any farms with baby goats.

Indiana Foodways has developed 19 different foodie trails for people to explore throughout their time in the state, including a Tenderloin trail, a BBQ trail, a “Winner, Winner, Chicken Dinner” trail, and a Hoosier Pie trail.

I spent a day in neighboring Hendricks County where I found everything to be adorable – from Oasis Diner that rode the railways from NJ in the 1950s to Mayberry Cafe with a full-on Andy Griffith Show theme. 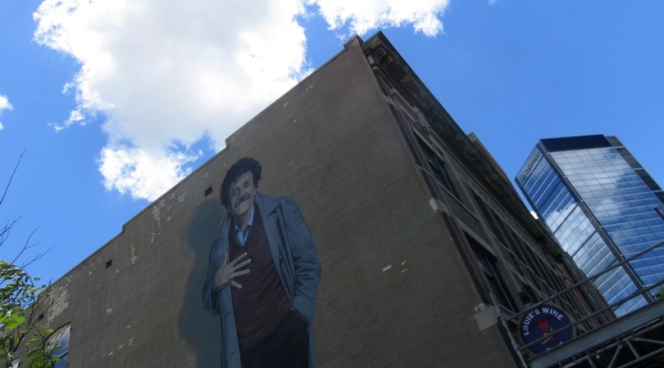 Visitors will rejoice in Indy’s street art all around downtown, but hipsters will especially feel at home in the neighborhood of Broad Ripple. If I’d had more time, I could have stayed on the deck of Punch’s Last Shot listening to live music by the Peach-Pickers all day. Broad Ripple is where we had our lunch at Public Greens (where all profits and crops go to feeding kids), next to the Public Greens public garden where they encourage you to touch and smell the plants, and next to the market with tons of sustainable and eco-friendly products like dryer balls that last for 1,000 washes and paper towel rolls with fabric reusable towels instead of paper. This ‘hood will be my first stop the next time I’m in town.

Another fun hipster spot – there’s a hipster Abe Lincoln on the wall drinking PBRs, decked out in tattoos, and wearing a shirt on that says, “Shreddysburg” – is the intended-to-look-like-a-dive-bar Sinking Ship with a vegan-friendly menu. I ordered the Cuban sandwich which wasn’t vegan, but was damn good.

I don’t have a specific place in mind in Indy that would be good for solo travelers, but rather, it’s a feeling I got from my few days in town that I wouldn’t be alone if I had been alone. I love talking to strangers and meeting people, especially over a beer or cocktail. Sometimes when at home in NYC or when traveling in Europe, people want nothing to do with me. I can’t even imagine what they’re thinking. In Indy, it was quite the opposite. Every single person I started a conversation with was happy to meet me and tell me about their city. Indy is also an easy city to get around, though you may have to invest in some Ubers if you want to leave the downtown area. If you don’t want to leave downtown, there’s plenty to do.

Let’s be honest, I go to games for the opportunity to sit outside and eat stadium snacks, but those of you who are into sports will enjoy Indy, for sure. You may have heard of a little thing called the Indy 500, if we are considering that a sport. Do we? Indy’s also home to the Colts (NFL), Pacers (NBA), Fever (WNBA), and the Indians (minor league baseball). The aforementioned Children’s Museum is working on a 7-acre expansion called the Riley Children’s Health Sports Legends Experience, set to open in Spring 2018. The exhibit will feature hands-on (and feet-on) sports exhibits and the ability to try as many different sports as you can think of, while also teaching kids that working out and being healthy can be fun. 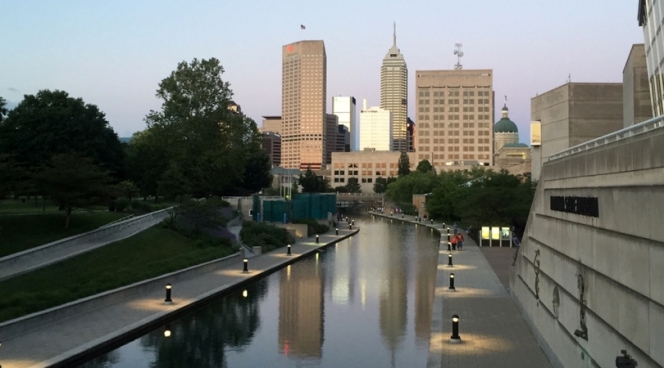 As mentioned in the previous blurb, the Children’s Museum’s future sports exhibit will make health nuts and their kids happy. Other things that already do that are the vegetarian and vegan options, as found at Sinking Ship and Public Greens, also noted earlier. White River State Park and the canal area are full of runners. The sun sets late in Indy so you can get in a long post-work run without feeling unsafe. I was in Indy over “National Yoga Day” and outdoor yoga was held at one of the city’s most iconic spots – Monument Circle. The city’s also got a solid bike-share program, just like NYC.

Indy has more war memorials than any other U.S. city aside from our nation’s capital. Monument Circle, with the Soldiers and Sailors Monument soaring above the city, honors those lost in the Civil War. Indianapolis played an important role in the Civil War for the Union. The giant and stunning World War I Memorial houses a military museum. Looking around the rest of the city, you’ll find dedications to those lost in the Korean & Vietnam Wars, a 9/11 Memorial and more. 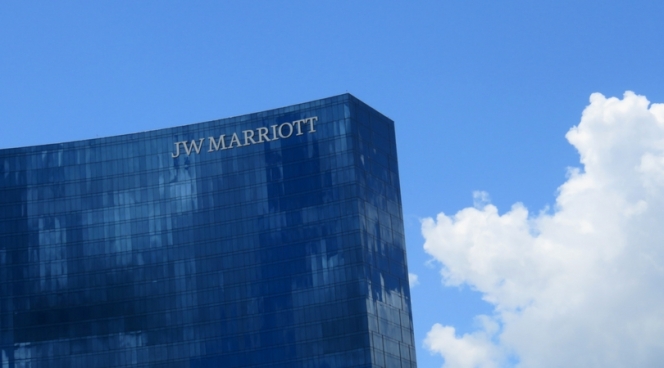 I can’t imagine a better spot for business travelers than the J.W. Marriott, where our Bloghouse conference was held. This property has been celebrated as the best hotel in the Midwest. It’s huge and has great conference facilities, a few bar and restaurant choices (like Osteria Pronto), and is somehow connected with covered walkways to the rest of downtown. One day at lunch, we walked for 20 minutes without getting outside, through a mall, through a store, and only had to be outside for 15 seconds in the pouring rain.

Learn more about the J.W. Marriott Indianapolis and reserve on Booking.com here (affiliate).

Whatever kind of traveler you are, I think you’ll find something special in Indianapolis- something that’ll make you feel emotional upon leaving, just like I did.

With which of the above traveling types do you most identify?

Would you consider Indy as a destination?

For more on Indiana, including posts from my fellow Bloghouse participants, visit this page.

This post contains an affiliate link, which means that at no additional cost to you, I earn a tiny commission when you purchase something (in this case, a night at the hotel) so that I can continue to bring you great travel content for free!

Many thanks to Bloghouse Indy sponsors Visit Indy, Visit Indiana, and J.W. Marriott Indianapolis. Opinions are always my own. Seriously, I’m a Taurus.