I’d always heard there was something special about an African sunset. I wanted to catch as many as possible when I finally set foot on the continent in February. To be fair, I feel that there’s something special about all sunsets, but the ones in Cape Town were top shelf. While you aren’t required to see all five of the below during your own visit, if you don’t make an effort to see at least one, please reevaluate your travel priorities.

{Music: “Magic” by Paperwhite, via Cameo} 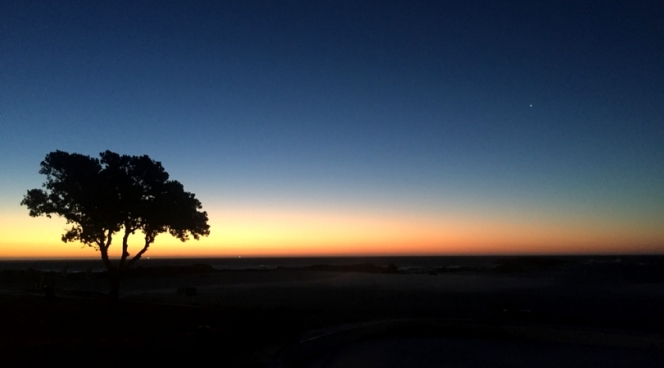 I am a total beach girl, having grown up a few minutes from the ocean on the Jersey Shore, but sometimes the beaches I encounter in my travels are disappointing. They’re often too crowded or their sand is not up to my standards (sand-ards?) – I know, I know, rough life, great pun. I was pleasantly surprised by the sprawling shores at Camps Bay Beach, where Marie and I had plenty of room to ourselves. The afternoon reminded me of summer at home except that when you turned around, instead of seeing the sky and overpriced beach homes, you saw gorgeous mountains and palm trees.

After sitting for a while and chatting, we found ourselves pummeled in sand from the harsh wind and in desperate need of food (see? Rough life). Instead of venturing elsewhere, we decided to eat calamari and edamame nearby at Umi Restaurant, on their second-story balcony. This first sunset of the trip set some pretty high standards for the rest of the trip, which somehow were surpassed. 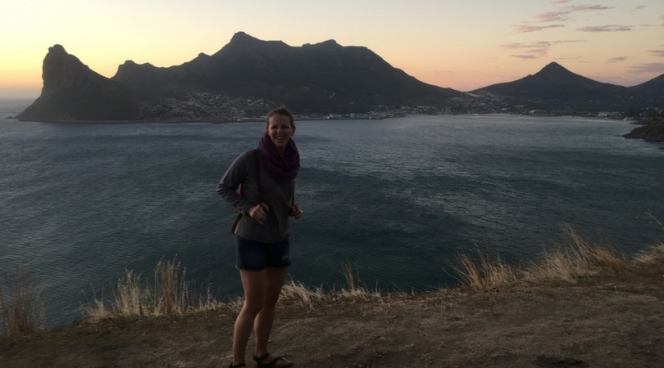 If you want the best scenery in Cape Town, don’t miss a drive along Chapmans Peak (also strangely referred to as “Chappies”). There is an entrance fee for the roadway, but it’s definitely worth it. The views are outrageous, and once again, so was the wind. The spot Marie had in mind for the picnic was way too windy, as in we would’ve been injured or blown off the cliffs, so we ended up in a parking lot nearby with picnic tables. We had gone shopping for dinner before driving out there and had to take turns holding each block of cheese so that they wouldn’t blow away. The wind was rough, but it did scare everyone else away before the sun dipped below the horizon, so we had the spot to ourselves.

On one end of Chapmans Peak sits Noordhoek Beach. This is an even more sprawling beach than Camps Bay and is about twenty times more peaceful, if tranquility can be measured. On yet another windy afternoon, we drove to this beach for a romantic sunset (on Valentine’s Day) before dining nearby at Red Herring. You can apparently ride horses on this beach, though all we saw were cute pups. Just be forewarned that the dogs playing ball on the beach are slobbering all over their toys so don’t pick one up to join in or you will have to rinse your hands in the cold ocean.

Although I’d initially intended to hike all the way up Table Mountain, the way Marie and I traveled up was equally as fun, and way less daunting. We parked south of the ticket booth and rode the cable car up for about half of the normal 255 rand ticket price. Our discount was either the “sunset special” for just the last hour or so of daylight or because they thought we were senior citizens. The cable car ride was totally fine, not scary as some people warned me before I went, and I’m not normally the most excited when it comes to heights. The car spins around while you are traveling up so that you can see multiple viewpoints on your journey up, but it was smooth.

We walked around for quite a bit to explore before the sun started its decent. We were high up above the city and had some awesome views, and we were also high up above the clouds in some areas. The clouds moved fast and I was kind of mesmerized by them. But I was most mesmerized by a little round rainbow that encircled our shadows against the clouds and followed us around as we walked. If you have any idea how this works, please leave me a comment below because as far as I’m concerned it was a sign of something from the gods.

While Table Mountain is a more touristy experience than some of the other sunsets listed here, it’s definitely worth getting up there.

On my final night before flying to Paris to start my European leg of the trip, my friends convinced me that there was enough time to see one final sunset before heading back to colder temperatures. We bought some provisions (more cheese) and drove right up to Signal Hill, which had a complicated parking situation. People started to leave as soon as the sun dipped below the horizon, so we were able to move the car around to a less complicated situation quickly. The rocks were covered with a green netting which we supposed was to make them less slippery, as the hill did not seem monitored at all, aside from the odd amount of guinea hens hanging out, hoping for some cheese themselves. It was the perfect way to end a wonderful week and a half in South Africa.

Even though my “year of travel” is technically on the outs, I know it won’t be too much longer until I see another African sunset.  Though I don’t know when it will be exactly, I can guarantee it won’t take me 32 more years to get back on the continent like it did the first time. Let me know if you want to join!

For another travel video I made, check out this post.