I’ve found myself hearing “do more of this” over and over again at certain moments in my life over this past year, as if a group of people in my brain is all meditating at the same time with a joint mantra. One of those moments came as I was paddling a bright green kayak in the sunshine down the gorgeous Chemung River last month.

Katie, Marie, our friend Dave (who showed us all around Corning), a family of three with another blogger, and I joined Aaron of Southern Tier Kayak Tours that late August morning for a “Paddle the Palisades” tour, in the river valley sandwiched between Corning and Elmira. I’ve been on plenty of tours and in plenty of kayaks, but I’d never before combined the two experiences. The paddle ended up being one of my favorite activities in the Finger Lakes that week.

When I first got out on the water, I became stuck in the rocks as the water wasn’t deep enough and the paddle wasn’t working in such shallow waters, but I knew I had this. Kayaking is in my blood – my dad and sister have won races together, my dad has won some on his own, and my parents even bring the puppy kayaking with them sometimes (yes, she does have her own puppy-sized life jacket). It was easy enough to hop out and pull myself to deeper waters to continue on. 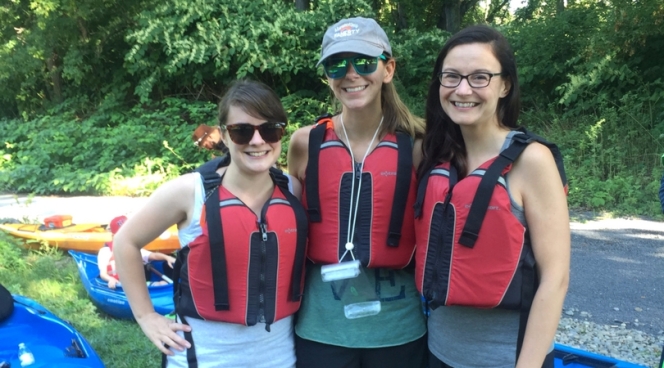 I hadn’t been kayaking for two whole summers, though I hadn’t realized it until I was out on the water that day. I’d last paddled on the East River in New York City with some friends. It was a fun day, but a hot one, and we’d had to wait in line for over an hour to be out on the water for just thirty minutes. We had to stay within the ropes and all joked about how we should avoid getting wet in case the water was a little dirty.

This time, the whole river was ours. We paddled for five miles over two and a half hours, though it didn’t feel anywhere near that far or long. I could have spent the whole day out there, though my arms were getting tired. The river was clean and refreshing. I stopped sometimes just to float with my arms hanging in the water because it felt so incredible. Had I been alone, I might have hopped out for a swim.

Though a swim would have been fun, it was also nice to not be alone. Aaron brought along with him a wealth of knowledge about the river, the Chemung region, and the local wildlife. He pointed out different plants and trees and told us where to look for bald eagles. To our delight, the group saw not one, but two bald eagles, in two different instances, each just chilling in a tree and then showing off their wingspans and soaring for a bit. Considering there are fewer than 350 breeding pairs of bald eagles in NY state, seeing two on one trip felt pretty special.

There were little islands in the middle of the river and most of the time, Aaron told us to stay to one side of them and continue on, but we stopped at one to get out of our boats to stretch and skip some rocks. Well, okay, none of my attempts actually skipped, but you already knew that if you know me in real life. Aaron pulled up some larger rocks from the water to show us organisms that were hanging out underneath them. He said that when researchers are figuring out the water quality, they analyze the types of organisms found in the river, since they know how clean the water needs to be to sustain certain types of life.

We learned about the history of the river and the region, from the ancient history of glaciers forming the dramatic landscape to the more recent history of devastating flooding in the early 1970s that still shapes the surrounding towns to this day. 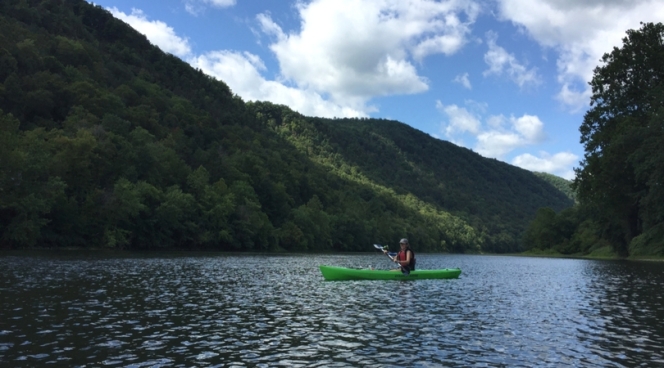 I swear that I felt totally relaxed the whole time we were out on the water, but at one point, while approaching (small) rapids, Aaron pulled to the side to make sure we all passed successfully. “You’re very tense!” he called out over the water to me. This is probably me always – feeling relaxed for me but never actually being as relaxed as anyone else.

Even if I’m never *quite* as relaxed as normal people, being out in nature in a kayak gets me pretty close. Since I’ve left the Finger Lakes, I’ve gone kayaking at home in NJ and have plans to get out a few more times before it gets too cold. After all, I want to do more of what makes me happy. Do yourself a favor and do more of what makes you happy, too. If that includes kayaking, check out Southern Tier Kayak Tours in the Finger Lakes.

Many thanks to Mark Twain Country, Corning and the Southern Finger Lakes, and Southern Tier Kayak Tours for hosting us. Opinions are always my own – seriously, I’m a Taurus.

And thanks, Marie, for the picture of me on the water!