But what if you don’t have Hamilton tickets? {I’m speaking hypothetically of course, because I *do* have a ticket thanks to one of my cousins, though we have to wait a whole eight months until it’s our turn – for all we know, Carrot Top will be starring in it at that point.}

Here’s the solution: get to know Hamilton in a more intimate way, by visiting his old haunts, hearing highlights of his life, accomplishments, and scandals, and seeing his grave site on a Hamilton Happy Hour tour with Urban Adventures. The cost of the tour ($30) is way less ($180 less) than what I just Venmo’ed my cousin for the Broadway ticket and it takes 34 hours less of your precious time than what it would take to listen to the audiobook of Ron Chernow’s biography of Hamilton that inspired the musical. Don’t throw away your shot at this experience.

Sure, I tried to read the 800-page biography on the beach this summer, aiming to read just one chapter for each day I was in the sunshine. But while I loved how Chernow wrote and framed the story of Hamilton, and it was truly fascinating, it felt like homework at the same time. I took a break when I missed about a week at the beach while I was in Indiana, and then, like so many other books I’ve started as an adult, I put it down and haven’t picked it up again.

It is in the churchyard of Trinity Church where Alexander Hamilton was laid to rest along with his loyal wife Elizabeth Schyuller, her sister Angelica, rumored to have also been involved romantically with Hamilton, and the eldest son of Alexander and Elizabeth who also tragically passed due to wounds sustained in a duel. Josh told us that while there were only 25,000 people in the city at that time, about 10,000 people came to Hamilton’s funeral, which certainly helped frame the story as to how well Hamilton was known and respected. 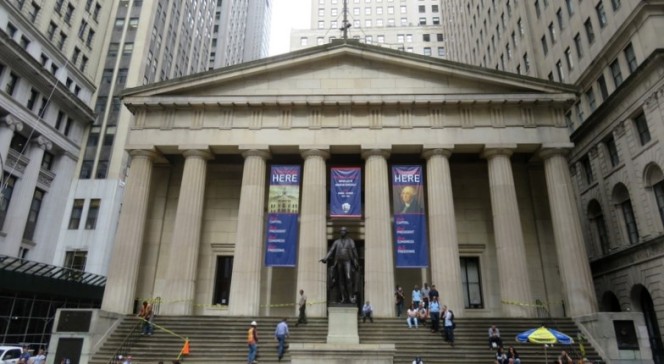 Through the Financial District we walked, to several sites associated with Hamilton – 57 Maiden Lane where Thomas Jefferson used to live, Federal Hall (the site of Washington’s inauguration that Hamilton observed from the balcony of his home), and the New York Stock Exchange Building (since Hamilton is the father of our national banking system). Along the way, Zuccotti Park (home of the “Occupy Wall Street” movement a few years ago) was pointed out to us. Josh thought that Hamilton would likely have sympathized with the protesters since he believed in “a benevolent elite” class, where the rich would help out the less rich. 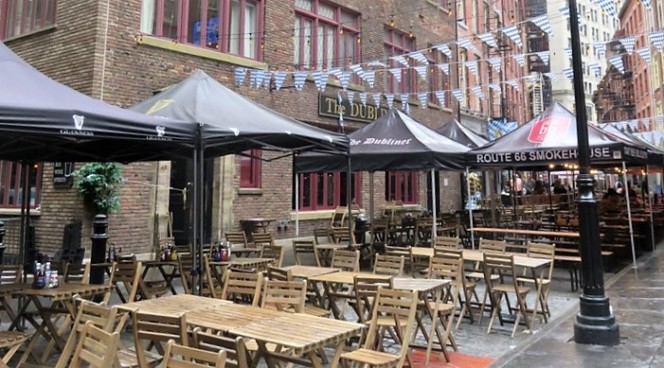 We continued on through Stone Street, one of the oldest areas in Manhattan that actually still looks like it could be from “the olden times” aside from the Oktoberfest flags currently hanging up over the outdoor picnic areas in front of the restaurants. Stone Street was originally paved in oyster shells and if you’re interested in how the history of oysters in New York City influenced the history of New York City, I recommend The Big Oyster by Mark Kurlansky (though, full disclosure, this is another book that I am only a third of the way through, years after I first started it).

The final stop of the tour was Fraunces Tavern for a drink and continued conversation, which makes the “Happy Hour” part of the tour. Fraunces Tavern is one of the oldest bars in Manhattan (along with two of my favorites, the Ear Inn and McSorley’s) and is reportedly Manhattan’s oldest surviving building (I bet it has lots of ghosts). I’d tried to bring my parents to this spot a few years ago, but it was too crowded the day that we went. On this afternoon, there was plenty of room. It was here where, just a week or two prior to the duel, Hamilton and Burr were together for the final time. I wondered what Hamilton would have ordered there. I decided on the Fraunces Tavern ale although I’m sure the recipe has changed sometime in the last 200 years. It was at this point that Josh wrapped up the Hamilton story by talking about a few scandals that came across Hamilton’s way and of course, discussed the infamous duel that occurred across the river in Weehawkin.

This tour is best for people who enjoy American history or nerds like my cousins and sister who keep quoting lyrics from the musical in normal conversation. If you’re lucky enough to have Broadway tickets, it would be fun to take the tour before seeing the musical that evening. The tour is also simply a good way to explore a less visited neighborhood than your standard tourist go-tos of Times Square and every block surrounding the Highline. The Financial District itself is pretty and old, but it’s not terribly interesting without the backdrop of a story – and this is coming from someone who worked in finance for nine years.

The best thing this tour did for me is inspire me to pick up Chernow’s biography again. Though I may not have many more beach days this year, I am making a promise to myself and to you all that I will finish the biography by the time I see the musical in April. Just you wait, just you wait.

This post was written in partnership with Urban Adventures NYC. Many thanks for the tour and the motivation to pick up Chernow’s biography again. At the time of this post, the Hamilton Happy Hour costs $30.