When I returned from India, someone I hadn’t seen in a while said, “Welcome back from vacation!” Though I know he meant, “Welcome back,” part of me wanted to say, “Vacation?!?!?!?! That wasn’t a vacation!!!!!” I loved India, but volunteering there had taken a lot out of me, and I certainly didn’t feel like I’d been on a beach with a drink in my hand. In Croatia this month, I was working on my laptop in a caffe for a few hours almost every day. Even when I’m not volunteering or working, I’m trying to experience and photograph as much as possible or I’m exhausted from catching a bus or train every two days. A few days after working my booty off in Croatia, I arrived at the Holiday Inn Resort in Jekyll Island, Georgia. For the first time in years, I felt like I was truly on vacation.

There were many reasons why I felt like I was on vacation at the Holiday Inn Resort Jekyll Island, even though I did sneak in a few hours of work here and there because I am who I am. The huge suite my friend Brianne and I were in had a balcony with two chairs that faced the beach. The leaves of the perfect palmetto trees and the purple grass in front of the ocean waved like metronomes to the wind. As I stared out into the choppy ocean, I would either see no one at all or just one bike-rider, then just one dog-walker, and I was instantly relaxed. 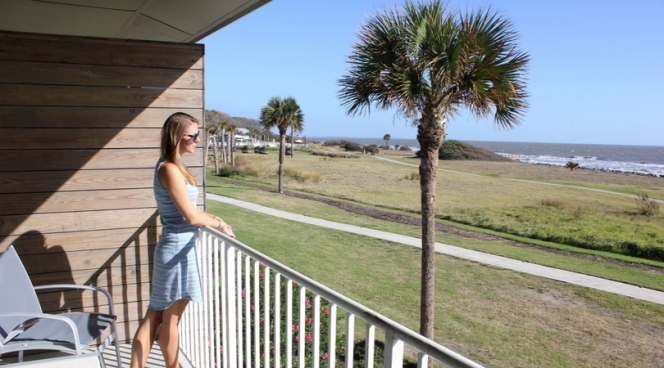 I wasn’t the first New Yorker to experience a true vacation on this small barrier island off the coast of Georgia. Before it became a state park, it was perfectly manicured to be a vacation resort, a winter get-away for the rich and famous. While there’s a longer history that dates back centuries, the more recent history is that in the late 1800s, the island was sold to a bunch of millionaires from NYC – names you know, like the Rockefellers, the Morgans, and the Vanderbilts. A beach club was started, to which membership was purchased for $600 and passed down through the generations. At some points in the clubhouse dining room, 1/6th of the world’s wealth was in one room. Let that sink in. As air travel became more popular after World War II, the rich started traveling elsewhere and in 1950, that state of Georgia bought the island so that regular people can enjoy it all year long.

Though we were just on the island for two nights, we had many an adventure. One of the must-do activities is a tram tour of a few of the millionaires’ former cottages. Right before we left, we tried to get turtles and gators to come up to us at Horton Pond. The gentleman at the desk at the Holiday Inn Resort told us we should smack our lips loudly as if we’d just put on lipgloss. Brianne and I thought it was an joke at first and that there would be cameras and microphones set up at the pond to make fun of us for being gullible Yankees, but we did have one turtle swim up to us. Unfortunately/fortunately, we saw no gators.

Though we saw that turtle, my favorite adventure was right after we checked into the Holiday Inn Resort, when we rented bikes in the lobby. We rode our bikes down the 20+ miles of paths to the north of the resort and headed toward Driftwood Beach. I’ve been on many beaches in my day and this was definitely one of the coolest with its huge uprooted trees and root structures sitting on the beach in different positions. Some on Jekyll Island call Driftwood Beach “a tree graveyard”. The beach and the trees were gorgeous in the golden hour of the afternoon and I imagine would be an awesome spot to watch the sun rise as well.

We rode under miles and miles of Spanish moss with me reaching up as much as possible to let it pass through my fingers. I felt as if a woodland creature wearing a hat could pop out in front of us at any moment. I had the same feeling on that bike as I’d felt in a kayak in the Finger Lakes in August and, just like then, made a mental note to “do more of this”. 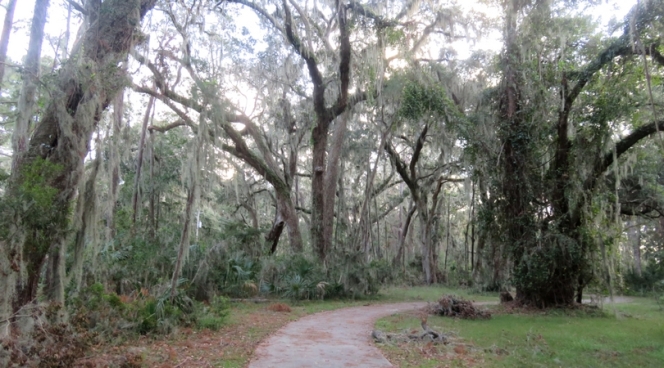 The first night, we each had a local beer (I tried Jekyll Brewing’s Hop Dang Diggity Southern IPA) at the Holiday Inn Resort’s on-site restaurant Beach House. There, we met some lovely locals who recommended the tram ride and some other food spots, though their dinners looked good as well. We wanted to try as many places on the island since we only had a few days.

On our final night, we grabbed happy hour drinks at Northshore, the bar on the third floor of the lobby building, right by the guest laundry facilities and the gym. We sat on outdoor couches on a larger balcony than the one attached to our room and shared stories as the sun melted away and the clouds changed colors. 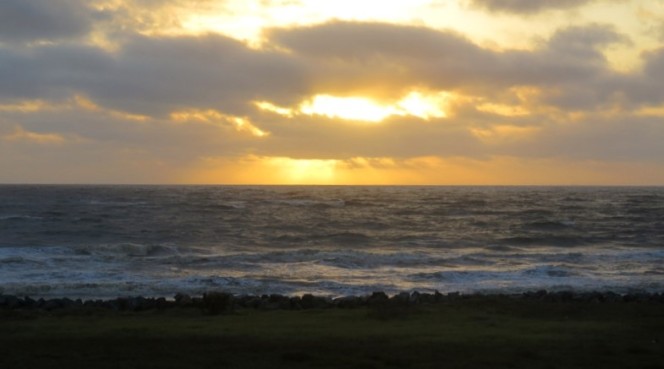 Though Brianne’s an early-riser naturally, I set an alarm to make sure I woke up the first morning to watch the sun come out of the ocean (I realize that’s not how that works, but tell me that’s not how it looks). We made coffee in the room’s Keurig and both caught up on some emails until we were ready to officially start the day. The second morning, I was too comfortable in my queen-sized bed surrounded by four fluffy pillows to realize my alarm had been set incorrectly so I stayed in my nook longer than expected. But that’s okay, I was on vacation. 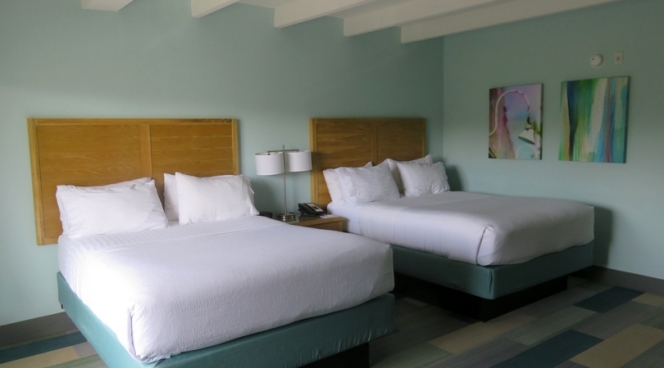 Many thanks to the Holiday Inn Resort in Jekyll Island, Georgia for hosting us. As always, the opinions of this Taurus are always her own.