I had trouble with Vienna. It was the halfway point of a six-week trip after two weeks in Cape Town with two friends, a wedding in London with many friends, and a few solo days in both Budapest and Bratislava. I love traveling by myself and meeting people because of it, but for some reason, in the middle of February in Central Europe where I seemed to fit in with the crowd, I hadn’t had any conversations of value in a week.

I knew that Vienna wasn’t going to be my favorite stop on the trip which included 9 other cities including a surprise visit to Cologne. After all, I’m not 300 years old. I’m not into the opera or classical music. It felt like most of the attractions were kind of stuffy or showing off the city’s riches, like visiting the “Imperial Treasury of Austria” or the 47 palaces. I mean, I hadn’t brought my monocle. And, well, this became a self-fulfilling prophecy and Vienna wasn’t my favorite city. The bars where I tried to meet people were full of cigarette smoke. The main strip felt like an outdoor luxury mall. I didn’t feel like paying the entrance fees for the palaces and museums. But in my few days there, I did find some activities I would recommend for those under the age of 300: 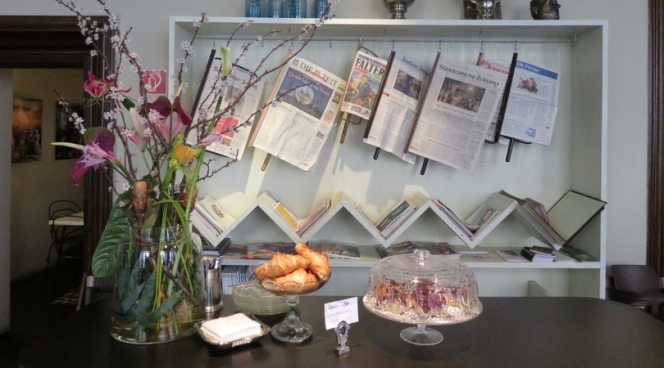 This year, I’ve become quite well acquainted with different coffee shops in Europe as I’ve traveled with my laptop to get work done, but the cafe culture in Vienna is a real thing. So real, in fact, that “Viennese Coffee House Culture” is listed as part of the “National Agency of Intangible Culture,” a part of UNESCO. The coffee house in Vienna is a place where you’re welcome to stay for hours while paying for a single cup of coffee (always served with a glass of water), catching up with friends or business associates, or reading your choice of newspapers kept on wooden rods, like in the above picture at Cafe Ansari. My man Rick Steves describes Vienna’s coffee shops best: “where time and space are consumed, but only the coffee is found on the bill”.

Wait in Line for Ice Cream

The first thing I did when I arrived in Vienna after checking into my hotel was eat some ice cream because I am who I am. Sure, it was February and I was wearing gloves, but when you see a line of 30+ people waiting, you get in that line. This raspberry + chocolate cone was from Eis-Greissler, but you don’t have to walk far in Vienna without reaching a variety of ice cream and gelato shops. 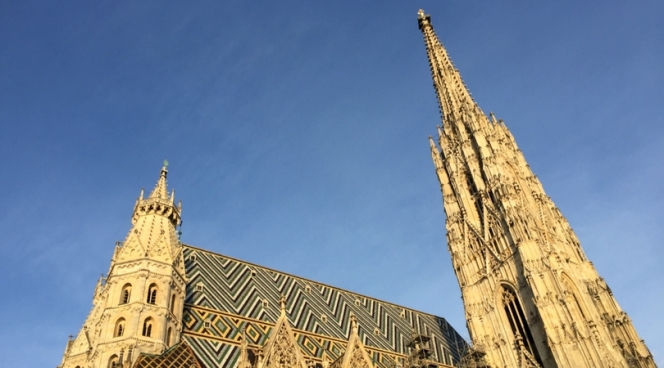 While it’s probable that 300-year-olds would also visit this cathedral, it’s pretty enough to be added to the list, especially during golden hour. It’s in the middle of a regular shopping and tourist district and stands out for sure. There’s been a church in this spot for almost 900 years and this one’s been around since the 1300s. Super casual. The coolest part about this building is the tiled roof, which I hadn’t seen on a church until I saw Matthias Church in Budapest earlier in February, and then later noticed on St. Mark’s Church in Zagreb in October.

Walking down a level to the river from the main streets, you’ll find a lovely path to walk or bike on surrounded by large-scale street art, which sometimes is accompanied by less attractive graffiti pieces. There are also a few sculptures along the way. You could easily spend a few hours walking these paths, street-art-watching, and people-watching. 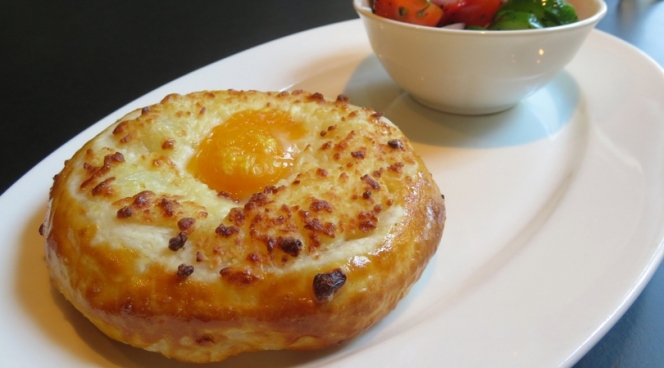 Just like many other large cities, Vienna is full of immigrants which means there is some incredible international cuisine. Cafe Ansari, my favorite cafe mentioned above, offered a beautiful Georgian breakfast (pictured above) of the traditional dish of Khatschapuri (cheese-filled bread with a fried egg) and a cherry tomato salad with red basil dressing and fresh herbs.

I also went to Kolar with another travel blogger I met on Facebook and we had a few fladen, which are pitas cooked in a brick oven with various awesome fillings. I had the mozzarella with pesto, cream, and tomato which was the special of the day. My new friend said that the food was similar to Bosnian but now as I’m looking up fladen, it looks like it could be Turkish. Either way, it was incredibly delicious. Though I love eating international food, I’d never had these cuisines before Vienna.

Eat (1/2 of) a Wienerschnitzel 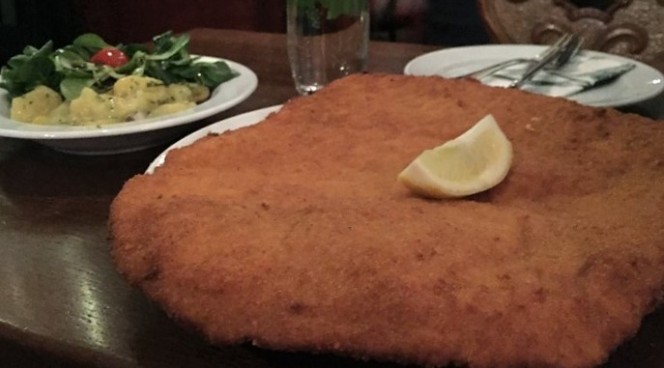 If a city has a dish named after it (Vienna in Austrian/German is “Wien”), you should try that dish in that city, whether you are 300 or not. Now, to be fair, the official version of wienerschnitzel is veal, which I’m not into, so I had a less official version, made with pork tenderloin. Figlmüller has been serving it as pork since 1905 and doesn’t serve the one with veal, so maybe it is still official after all. Basically the dish is meat, flattened as much as possible, breaded, baked, and larger than the plate they serve it on. I definitely recommend sharing this dish with someone as every other table was staring at me eating by myself attempting it on my own. 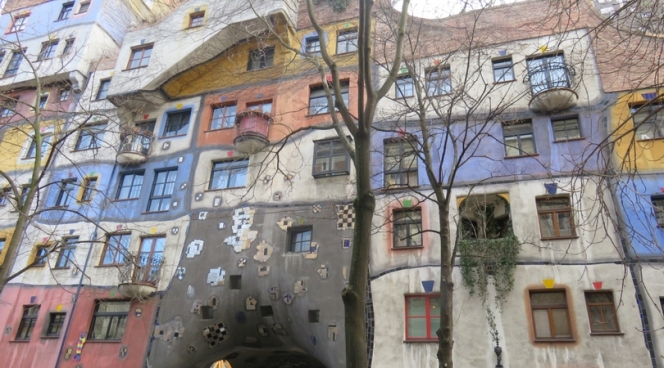 Though as I mentioned above, the majority of the Vienna architecture felt quite stuffy, there was one place that felt different because it was totally imperfect. That was Hundertwasserhaus apartment complex, designed by Austrian artist Friedensreich Hundertwasser, and built in the mid-eighties with the concept of “a house in harmony with nature” and “a house for human beings and trees”. The complex is decorated with bright colors and mosaics, has a mixture of mismatched windows, and has balconies and a rooftop with areas for gardens and trees, as Hundertwasser envisioned. The concept reminded me a little of Gaudí’s Park Güell in Barcelona.

I stumbled upon a winter festival one of the nights of my visit by following the sound of Bruce Springsteen music (hi, I’m from Jersey) to Wiener Eistraum or “Vienna Ice Dream” skating rink in front of the massive and beautifully lit-up Rathaus, the city hall. Along with Bruce and other tunes, I found a ferris wheel, inflatable snow-globes, hot chocolate, and jelly-filled doughnuts with my first initial on them in powdered sugar. The rink was shutting down for the night or I might have gotten on the ice myself, as it’s been a while.

I would like to give Vienna another chance. Perhaps in the spring or autumn and not in the dead of winter, perhaps with a friend or two, and perhaps having first done some research. I’m sure I’ll make my way there again before I turn 300. Anyone want to celebrate my 200th there?

If you’re interested in Vienna’s “dark side”, check out this AFAR article from the October 2017 issue.