My name is Erin and it has been TWELVE MONTHS and three days since my last trip to Europe, but I am thankfully returning THIS WEEK. And yes, I’m super late with my Croatia content because I went right from that trip to finding a job to finding an apartment to settling in to a busy spring and summer. But some of what’s in Zadar hasn’t changed for centuries, so I’m pretty sure everything I loved about this picturesque town on the Adriatic Sea is still the way that it was a year ago–even if nothing about my own life is the same as then.

And so, my favorite things about Zadar: 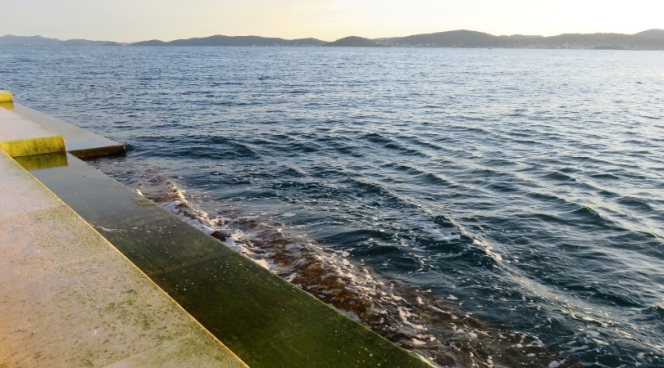 The sea organ is the reason Zadar was initially on my radar. (And yes, I wish that rhymed, but that’s not how you pronounce “Zadar”.) In 2005, a Croatian architect built a huge musical instrument that plays different notes as the waves of the Adriatic come in and hit certain parts of the structure. To me, it sounded like a mixture of a giant wind chime + whale mating calls. As the waves are random, so are the notes. It’s a fun spot to just sit and listen and stare across the sea for a while and you’ll find many visitors doing just that, sitting on the steps as the day passes by.

The sea organ is conveniently in the perfect spot to watch the sun set over the Adriatic. I watched a particular gorgeous sunset toward the end of the trip. And as with many sunsets I’ve watched over the years, I pondered what this next chapter of my life would bring me, since I promised myself when I returned home that I would start looking for jobs to bring me back to New York. It’s actually poignant reflecting on this a full year after that sunset, when I had no idea what was to come.

Monument to the Sun

Also right by the sea organ and the Adriatic is a Monument to the Sun, designed in 2008 by Nikola Bašić, the same architect responsible for the sea organ. People gather around the circle every night to see a tribute to the sun once it has disappeared below the horizon. The 22-meter diameter glass circle with 300 multi-layered glass plates (thanks, Wikipedia), is the sun, proportional to planets scattered in the surrounding area. Underneath the plates are “photo-voltage solar modules with lighting elements”.

Being the oldest continuously occupied Croatian city (they can trace it back to 9th-century BC, no big deal), there are a lot of old buildings in Zadar. The “pillar of shame”, where people were punished during the Middle Ages as well as columns from the forum are pictured above, but I have many more photos that I’ll try to share on my Instagram–though yes, you’re right, I’ve posted once in the last 6 months, so we’ll see. Other ruins that exist are the outlines of the tabernae or shops, St. Donatus (a circular church from the 9th century AD), and the remains of a temple that honored Jupiter, Juno, and Minerva. If you’re interested in learning more about the Roman times in Zadar, you can visit the Archaeological Museum in Zadar, which I’d like to do next time.

One of the best meals I had in Croatia was at Proto Food&More in Zadar. It was an adorable, cozy spot where we ate dinner outside at a corner high-top on a covered patio in the middle of a rainstorm. I didn’t take a picture of my dish, which is so unlike me, but I do remember I enjoyed my homemade pljukanci with prosciutto and rucola because I took a picture of the menu. Pljukanci is a traditional Istrian hand-rolled pasta (Istria is the peninsula in the Adriatic Sea with sections of Croatia, Slovenia, and Italy) hand-rolled pasta. Proto in general serves traditional cuisine with a modern twist and if you don’t at least try the regional cuisine while you’re traveling, you’re doing it wrong, my friend.