Okay, let’s be honest here. The rain is terrible. I get it. I totally get it. The plants, they need it to live. Taylor Swift needs it so she can keep writing songs about kissing it in. When you’re already planning on staying in and having a Netflix day, it’s awesome. But when you’re traveling and you only have a few days to explore a place you might never get back to? It is terrible.

So you adapt. You bundle up and carry the umbrella with a broken handle that your Airbnb host has left next to the weird bathroom that doesn’t have a sink but does have the walls of a cave. You spend more time indoors than you would normally. You don’t take as many photos so that your camera isn’t at risk of drowning. And you duck into restaurants to eat. Which is exactly what I did in Riga, Latvia—thankfully known for its crazy affordable fine-dining scene, so it could have been a lot worse.

PSA: There is a TGIFridays in Old Town, please don’t let that fog your impression of Riga too much (but also if you dine there, you’re dead to me). 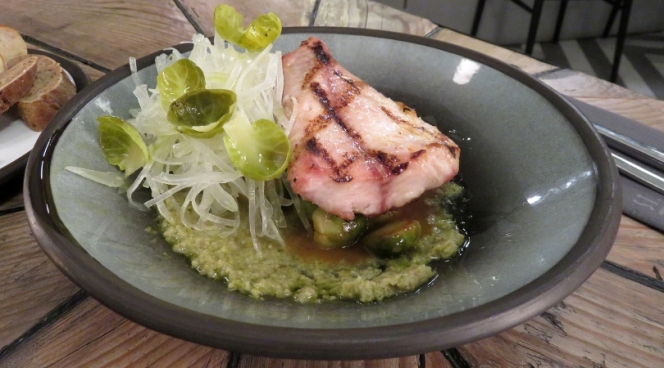 The Swedish gentlemen I met in Vilnius told me about the Nordic White Guide, which lists the best restaurants in the Nordics but also has selections for the Baltics. 20 of these are in Riga so I thought it would be fun to try a few. (As much as I would have loved to try them all, my stomach just does not have the capacity for 20 meals in 3 days.) At St. Petrus, my very first meal in Latvia, their thing is “modern Latvian cuisine with a Nordic taste accent”.

Head chef Dmitri Fedosevich brings experience from Pétrus in London, a Michelin-star restaurant in the Gordon Ramsey family. I ordered a gorgeous fillet of catfish with Brussels sprouts, fresh kohlrabi, and pesto from Brussels sprouts and sunflower seeds and it was such an amazing way for Riga to welcome me. I actually contemplated returning another night because I loved the dish so much, but there was so much more that Riga had to share with me. Bonus? The meal was €17. 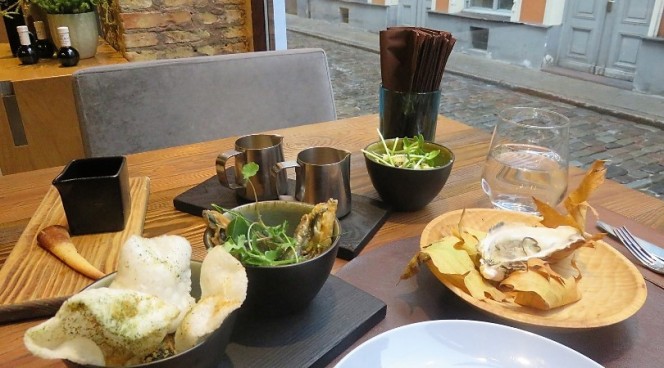 While the fine-dining restaurants are great for dinner, the better deals are definitely at lunch. At Restorans 3, I ordered a wild oyster, mashed potatoes with black truffle and Soira cheese (which seems to be a Riga thing, according to the goog), fried herring, as well as another solid bread plate (there was much more on the plate before I took this photo), all for under €15. And yes, I should have gotten more than one oyster (that ended up coming on a bed of autumn leaves) because there were two mignonettes so I had to choose. The truffle mashed potatoes were the creamiest, richest, yummiest I’ve ever had. The rice crackers that came with the herring were amazing and had a rich sauce at the bottom that tasted a little like fois gras, but I don’t know what it was.

I hadn’t had herring since I was in Amsterdam in 2012, and that was before last summer’s discovery that I actually do like fish, after decades of thinking that I did not. (Still not into salmon of any kind, sorry, Jeff.) Herring is big in Northern Europe and super healthy and the taste was great, but I still have a little trouble with the bones so I think I’ll stick with larger fish for now.

I tried to go to this White Guide restaurant (right across from St. Petrus) THREE times and couldn’t get in at all. But not because it was crowded, because it was closed on Sunday and Monday and not open for lunch on Tuesday. I visited Riga in October and since it’s not the busy season, there were limited hours not yet updated on Google. So I’m asking you to go to tell me about it. 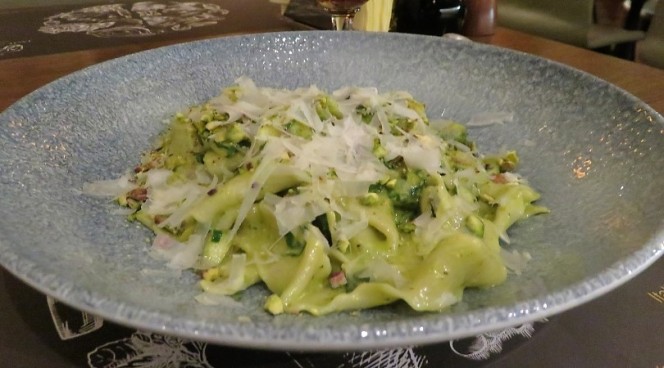 While Locale is in the White Guide, I actually was most interested in this restaurant because there was a sign about Georgian food on the window—I’m kind of obsessed with Georgian cheesebread, aka khachapuri, which I’ve had in Vienna and Vilnius. But after I’d already sat down and ordered a local beer at Locale—where it is important I note they have the softest napkins I’ve ever felt—I realized that the Georgian place, Alaverdi, was upstairs. It was too late to switch so I ordered the pappardelle with spinach, which *was* delicious, but was no khachapuri. 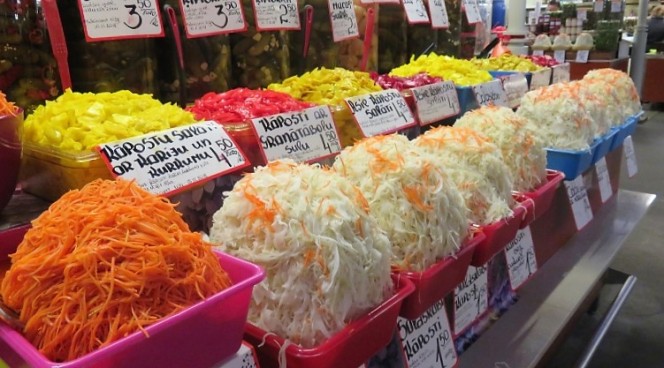 I love going to local markets while traveling and Riga has the *largest market in all of Europe*, in five German Zeppelin hangars from WWI, at that. I didn’t buy any groceries but I did enjoy watching old men pick up pieces of sauerkraut from the piles above with their fingers to sample them. At one of the “bars” within the market, I tried the popular Slavic/Baltic soda Kvass which they poured into a soda bottle from a keg. I could not have more than a few sips because it was just…not for me. Now I know it’s because it’s made from rye, a taste I do not enjoy, but my dad would probably love this soda. The market was sprawling for sure and there was a lot to see. I did wonder why it seemed like you had to go back outside to enter the next airplane hangar until I walked into the fish market and realized it needed to be cut off from the rest of the market because it smelled like what I’d imagine the inside of a whale’s intestines smells like. 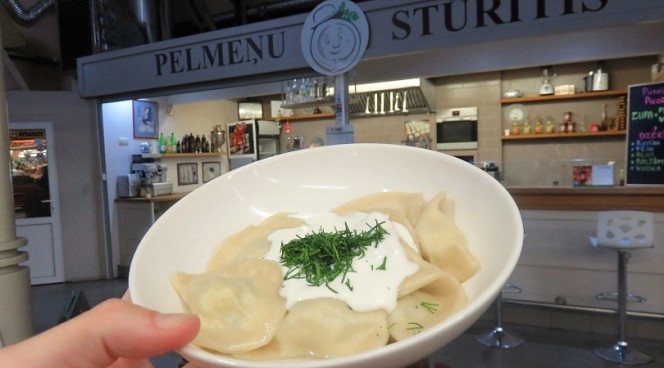 For lunch at the market, the website that I used to work for recommended dumplings at Pelmenu Sturitis, a family-run stand along the sides of the fruit & veggie section. Per the recommendation of the cashier, I ordered both pork and potato dumplings. Above are the potato dumplings with four dollops of Daisy or whatever sour cream they use in Latvia and tons of dill. I regret not taking a photo of the pretty salmon-colored pork dumplings (and I’m fully aware of how silly my regret sounds.) While I love solo traveling, I did wish that I had a friend with me so that I could try more dumpling varieties at this place without feeling guilty about wasting food. 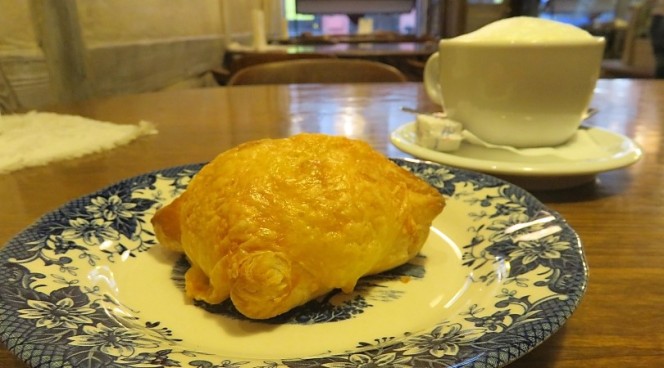 Just the windows of this traditional bakery showcasing their beautiful pastries are worth a peek, but def duck inside and taste them. I became obsessed with the hačapuri myself, which I just got really excited about because when I googled the word to try to figure out how to make that special C, it brought up khachapuri, which is the Georgian cheesebread I just mentioned a few blurbs above. HOW DID I NOT REALIZE this was why I loved this pastry so much?! Also who wants to get Georgian food with me in NYC or go to Georgia with me because this is clearly happening someday? 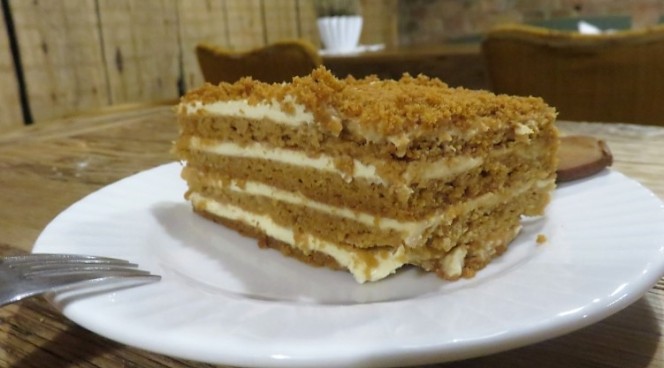 Before I realized how many awesome restaurants were available to me in Riga, I’d purchased a food tour. While I love food tours, this one was about 3x as much as it should have been and one of the places was the guide’s own restaurant which while good, wouldn’t normally be on the circuit. BUT one of the places we went was Bezē, a bakery with the popular Latvian treat, honey cake. I’d also tried this dish in Prague in 2017 so it wasn’t totally new to me. It’s unique, creamy, delish, and so sweet that half a slice is sufficient and though the ingredients are simple, I’ll never make it because I don’t have the patience to make layers. 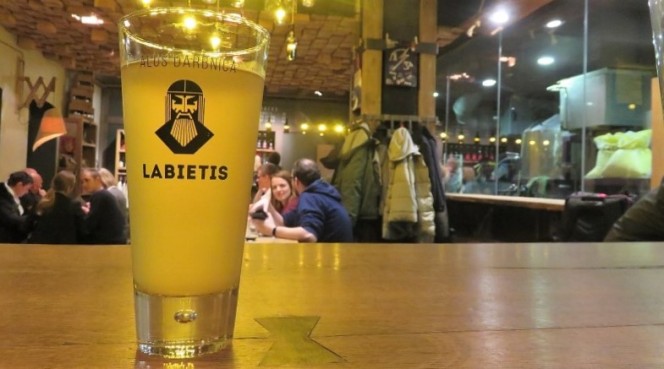 This is a bonus, because I didn’t eat there, but on the tour, I was taken to Labietis Brewery. If I’d had an additional night in Riga, I might have tried to hang out at the brewery to meet some people or—worst-case scenario—to finish my book while getting a buzz. It’s definitely a cool environment and could be in Brooklyn (the ultimate compliment coming from me), and you can see the way the sausage is made behind the glass, where yes, every brewer had a long beard. I love this line from their website: “All the available beers have not been moved more than 30m from grain to glass.” Talk about local. 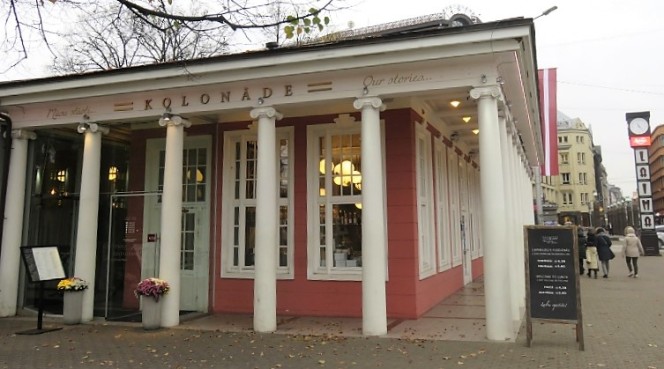 At the time of publishing, here’s what else is up in Riga: 3 Pavaru, Biblioteka No. 1, COD Robata Grill Bar, Entresol, Ferma, Gastrologik, Kolonade (above), Le Dome, Per Sé (as far as I can tell unaffiliated with NYC’s), Riits, Riviera, Speceriet, Valmiermuiža’s Beer Kitchen, Valtera, Vina Studija, and Vincents. For the most recent updates to the White Guide, visit this site.