When I first moved to the NYC area, I started off in Jersey City, near Grove Street. I lived there because I found a penthouse suite (okay, the top floor of a three-story building) for way less than anywhere I’d seen in Manhattan, right down the street from two of my closest friends Caitlin and Tyler (one of whom has an awesome food blog). I only lived there for a year and two months because I had gigantic dreams of living *in* the city, not just right next to it. This was also during a time in my life when I was staying out until 4 a.m., and not just on weekends, so I thought Manhattan would be easier for my social life.

Those times have definitely passed and the area around where I used to live has transformed itself incredibly in the last 9 years. I barely recognize it when I return to visit my friends or to dog-sit their sweet pupster Jackson. I even considered it for my recent move back to the area, but in the end, Brooklyn was pulling at me harder. Here are a few reasons why you should visit, especially if you’re already in NYC: 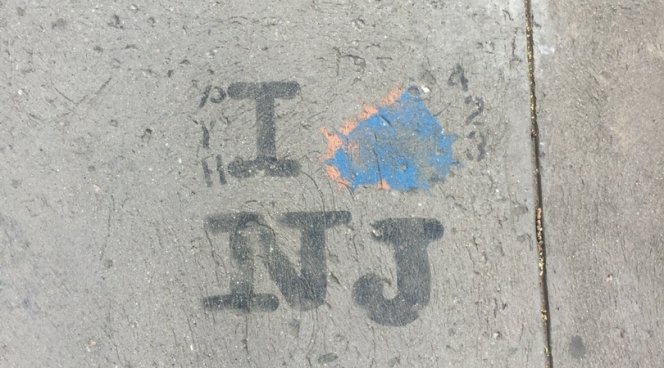 The PATH train makes it super easy to get to Jersey City and from many areas of Manhattan, it’s actually closer than official boroughs. When I lived there, I had a shorter commute to Tribeca than when I lived in Gramercy. In NYC, catch the PATH train either at World Trade Center, Christopher Street (West Village), 14th, 23rd, or 33rd Street (the last three at 6th Avenue). You can use your cash-value MTA card, but not an unlimited rides MTA card. In 2018, a single ride is the same as a subway ride ($2.75) and you’ll find the journey similar, though service late at night is spread out. If you want to Uber / Lyft / or cab it, from downtown Manhattan, it’s about 15 minutes to the Grove Street area. Most of what I touch upon below is around Grove Street. 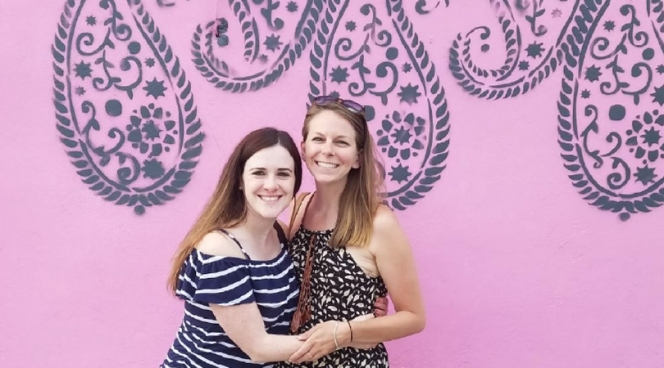 When I was dog-sitting this summer, my friend Erin and her partner drove into Jersey City so we could catch up and eat some dosa, a food we are both obsessed with from Southern India. The area on Newark Avenue near the Journal Square PATH station has tons of options for dosa and other types of Indian cuisine, along with many Indian grocery stores (where I stocked up on my favorite cookies, Good Days). The smells, the sounds, and the tastes brought Erin and I both back to Bangalore, where we each have spent some significant time. The dosa I had in Brooklyn last week was no where near as good as what we had at Sapthagiri, but I’m sure I’ll find a go-to near me as well.

The Best Pizza in New York?

In the fall, the NY Times questioned, “Is New York’s Best Pizza in New Jersey?” after visiting Razza across from Jersey City’s city hall and crowds have been swarming ever since. Razza doesn’t take reservations so get there early or face a two-hour wait on a Saturday, even when it’s cold outside. You can put your name in and go get a cocktail nearby. If you are lucky enough to have a place to eat it in JC or if it’s warm enough to eat it outside, order your pie at the hostess counter and wait 15 to 30 minutes, depending on the crowd in-house. I enjoyed my margherita pie, cooked in a wood-burning oven, with a doughy but thin crust, which reminded me a little of Lombardi’s in SoHo, BUT I have since learned that here, you are supposed to order the specialty pizzas, all with local toppings. Even without the toppings I was supposed to have, it was the best pizza I’d had in Jersey in a while.

Whenever I’m in Jersey City I bring home a stash of bagels from the Jersey Ave location of Wonder Bagels (The other location is not as good). They’ve been rolled, boiled, and baked to perfection for the last twenty years. If you ask for your bagel to be toasted, chances are you’ll be told they’re fresh out of the oven. There’s a full menu with omelettes, sandwiches, salads, and more. Grab an iced coffee to experience the genius method of using ice cubes made of the same coffee so that your drink doesn’t get watered down. This place is cash only and you’ll definitely wait in a line around the corner on weekend mornings.

Because I was working freelance each time I was dog-sitting, I discovered a plethora of awesome coffee shops, most of which were not in Jersey City when I lived there. Order in French at Choc•O•Pain French Bakery and Cafe, hang out in the garden and play ping pong in the back of Lackawanna Coffee (where you should also try their offbeat Organic Ginger Turmeric Latte or Black Sesame Latte / owned by the same people as Warehouse Coffee, above), or settle in at Smith and Chang’s which started as a unique home goods store (where you should try sandwiches like the Ham-ilton with ham, organic eggs, and Gruyere cheese and the Aaron Burr with Hamilton pork brisket, organic egg & siracha mayo, and cheddar cheese).

I’ve never had a prettier cocktail than the one above at dullboy when I was exploring with Julianne (the cocktail queen) in the fall. I guess their menu is seasonal as The Caitlyn (sotol siempre, agave de cortel mezcal, lavender syrup, violet bitters truth, “immature” brandy, and lemon juice) is not on their website currently. You may remember I’m into lavender drinks now, as demo’ed in Bratislava and Asbury Park. My next drink came with a paper airline in it. There’s a sweet bookshop, antique shop, nerdy speakeasy vibe at dullboy, with decorations of typewriters and bookcovers. It’s a good place to wait until your table at Razza is ready.

I’ve also had some incredible drinks at The Archer with my own Caitlin, the friend who first brought me to JC. Two of my favorite Mexican places with cocktails are Orale Mexican Kitchen (decorated with neon bottles of Jarritos) and Gringo’s (with cocktails on tap, which I haven’t seen elsewhere). All the cocktail places I mention here also have a nice spread of small plates and meals, as all good cocktail bars do, which helps when the drinks are much stronger than you realized. 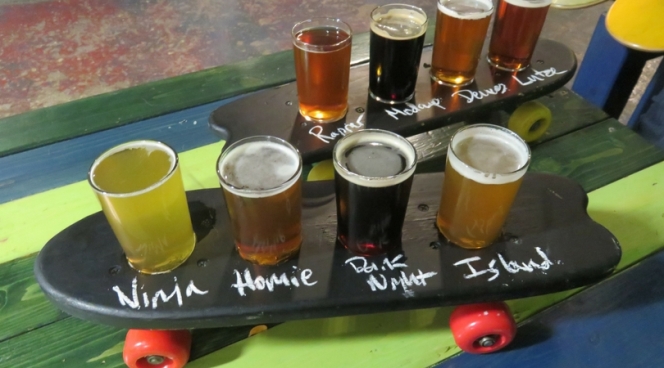 Departed Soles offers 100% gluten-free beers for those who need them and more than a dozen others for those who don’t, with fun names like “Four My Homie”, “Philoso-Rapper”, “New Jersey Ninja”, and “Cantankerous Blonde”. Flights are served on skateboards, but you give your driver’s license as a deposit so you don’t steal them, which is a pretty good idea, because I would. With our flights, Julianne and I also received a chip for a full-sized beer, but we were ready to move on with our drinking tour at that point.

I’ve celebrated a birthday or two at Zeppelin Hall Biergarten. It’s super slow service and a gigantic space with tons of people, but it’s so much fun and the pretzels and brat are two thumbs up emoji. Bring a deck of cards (preferable Disney-princess-themed) and grab a table outside.

I clearly took the photo above on September 11, while the memorial lights were lit at the World Trade Center, but every day and night you can find a gorgeous view of the full Manhattan skyline along the water. When I lived in Jersey City, I used to run along the water and gaze over at my future home and think about how thankful I was to be in the area, working in and living next to my dream city. I know, it’s weird that I used to run, because it’s currently something I hate. 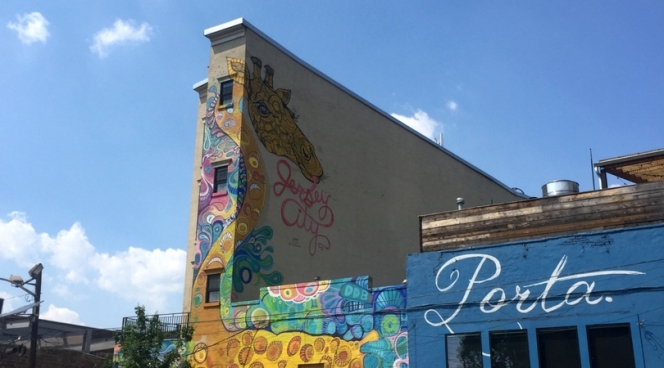 It seems like every open wall near the Grove Street PATH station is plastered with some cool street art, from the beautiful wave and Statue of Liberty mural welcoming you once you step into the open from underground to the giraffe above, to the faces of Lennon and other rockers, to a huge robot family in Victorian dress, to a giant white tiger, and more.

I could go on for a while more, but I don’t have the pictures to back everything up. There’s Torico Ice Cream, which I may have gotten every day while dog-sitting in the fall because they have an easy walk-up window so I could get my daily dose of Peanut-Butter Chocolate (definitively the best overall flavor of ice cream in the world) without having to drop Jackson back at the apartment first. This also helps you skip the regular indoor line that sometimes wraps around the block, wink wink. The pedestrian-only area of Newark Ave right by the Grove Street PATH station is great and is definitely something I wish had been there when I lived nearby. Go to Roman Nose for upscale Italian (where I’ve wined and dined with Katie), eat outside on the sidewalk (and your pup!) at Porta, Skinner’s Loft, or LITM, and spend time surfing the shelves at WORD, a really cool independent bookshop. Bring a fistful of quarters to play old-school video games and try the Cuban sandwich at Barcade.

While I didn’t choose to live there this time around, I have plenty of reasons to visit and I’ll never go too long without returning to Jersey City. It will always hold a special place in my heart for being my home when I first moved up here and for being home to some of my favorite people and my second-favorite doggo in the world.