I was pretty excited to travel to South Africa. Not only would it be my first time on the continent of Africa, the farthest south I’d ever been, and an escape from an east-coast winter – I was excited to eat. I’d heard about the food scene in Cape Town, with fellow travelers recommending specific restaurants to make reservations for weeks or months in advance. My friends and I neglected to do this, but we still found many a gem. Like Brooklyn, Cape Town is full of creative, entrepreneurial people doing their own thing – from gourmet mayonnaise to gin ice cream, so you have your pick of unique spots. Below are the best meals that I ate, a list which by no means encompasses the best meals in South Africa, but it’s a good starting point:

My first meal in Cape Town the morning after I landed was important. This was the meal that would set the tone for the entire trip. My friends and I wandered over the Woodstock Exchange a few minutes from our Airbnb to dine at Superette, a cute open-windowed eatery with subway tile walls and bright yellow chairs. We shared the toasted banana bread (with fresh banana & brown sugar butter) because when you’re on vacation, you need to try more than one meal. For my main, I ordered the boiled eggs & soldiers with bacon (soft boiled eggs & soldiers served with lemon dressed greens) – I didn’t know what “soldiers” were, but my UK friend said it was toast cut up into little strips to dip in the boiled eggs. I had trouble with the fancy egg-opener device, but everything was delicious. I was happy that the meal set the trend of fantastic dishes, but I didn’t realize it would also start my trend of having bacon at least once a day. I’m definitely not complaining, but please don’t rat me out if there’s a bacon shortage. 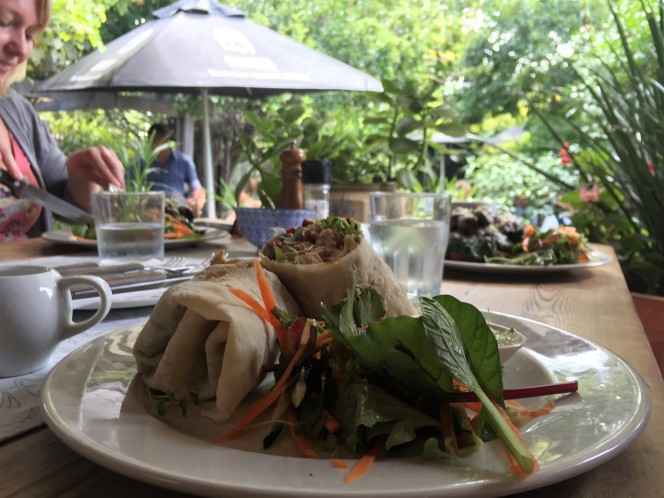 Set in an old house hidden behind high hedges sits Starlings in Claremont, with an adorable garden area in the back. Starlings is named after a local bird. Here I ordered the chicken & pesto mayo wrap with roasted tomatoes, caramelized onion, and rocket – the latter ingredient we know as arugula. I also had a flat white, my first of the trip, also starting a new trend for me. If I’d had more time to stay in Cape Town, I might have spent a few hours in the garden catching up on my New York and AFAR magazines, but alas, there was more to see. If you go, bring your phone into the bathroom because even that is Instagram-worthy. I won’t judge you. 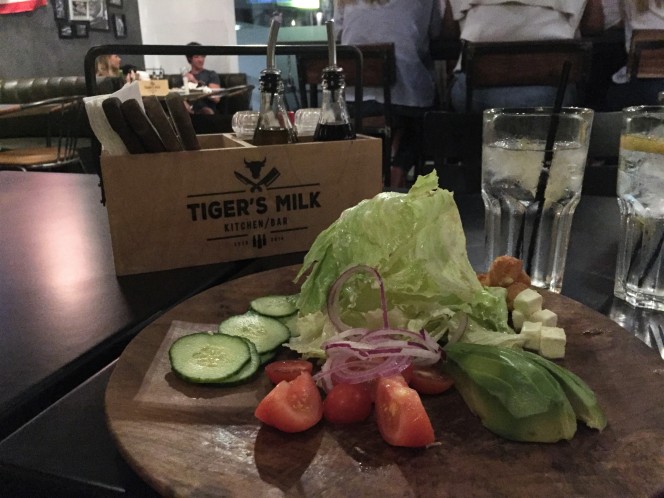 Though it’s a chain, the salad I had at Tiger’s Milk was one of the best I’ve had in a while – and take note that I don’t really like salads that much. After a  few local (Jack Black) beers at the bar, we all ordered salads in the American-flag decorated dining area. I had an avocado & feta cheese salad (butter lettuce, cucumber, tomato wedges, avocado, deep-fried feta, topped with onion bits and served with ranch dressing) which came “deconstructed”, with all ingredients segregated. I mixed it myself, though my plate spun around while I did so. I’d never had deep-fried feta and now it’s something else I want everyday.

One afternoon, Marie and I grabbed brunch in this taxidermy-heavy industrial coffee shop named after the Afrikaans word for “rabbit”. Any place where I can still get a sweet breakfast when everyone else has already switched to cheeseburgers has my vote. Since I loved the toasted banana bread from Superette so much a few days prior, I ordered the banana bread french toast with a berry reduction and cream with my fresh pomegranate juice and bacon. They didn’t appear to have maple syrup but I didn’t ask for it because I would’ve eaten both the berry reduction (similar to a jam) and the lightly whipped cream by themselves. Apparently their “crunchies” (homemade granola bars) are good on the go.

One night, while my friends had other plans, I decided to go on a solo bar crawl down Bree Street, a fun stretch of restaurants and bars near the city centre. When I left my first stop, Odyssey, I saw table-side seating and a giant bucket of Knysna (a local area) oysters. I hadn’t been looking for oysters, but I felt good vibes so I ordered three and a Drifter Cape Town Blonde beer. An older couple offered a seat across from them and I quickly fell in love. They are from Scotland but spend winters in Cape Town and their daughter and son-in-law are the ones opening up SeaBreeze, where the oyster and beer pop-up was. They’re all incredibly lovely people and everything in the restaurant will be from South Africa, from the seafood to the uniforms on the waiters. If you’re there in a few months and get to try out the full restaurant, please let me know how it is!

I found myself at Culture Club Cheese three times. Once to just walk in as we were exploring Bree Street, once to try to eat there before my solo bar crawl but it was finished serving for the day, and once to actually eat there for lunch because once I am thwarted, I try, try again. I’m so glad I did. I wanted something simple, so I ordered the Bacon Toasted Sandwich, Unpasteurised Myst Hill cheddar, free-range bacon, side avo ‘n tomato and a Drifter Eagle Weiss Wit, since I had liked my Cape Town Blonde so much earlier that week. Eating out on the patio in the sunshine was perfection and everything was awesome, but they have some more adventurous sandwiches with more adventurous cheeses as well, which I’ll try next time.

Marie and I spent an afternoon on Camps Bay Beach, alternating views from the gorgeous South Atlantic Ocean to the huge gorgeous mountains opposite. The wind kicked us off the beach as we started being pummeled with what felt like buckets of sand later into the day. The restaurants across the way from the beach were calling to us, especially one on the second level that seemed to have perfect views for the sunset. We ordered some drinks and two tapas – the flamed edamame (with sake, lemon butter, and Maldon salt – the flakes of salt were huge and delicious and I ate some all by itself) and the grilled calamari (with chilli, ginger, garlic, and Yuzu Soy dressing). But the best thing about this place was the view of the incredible sunset that night. People told me sunsets in Africa were special, and this was the first proof of that.

Another place with an awesome view was Knead in Muizenberg. This bakery / cafe has other locations but I can’t imagine any others have quite the same view of the Atlantic, the colorful bath houses, and the shark warning flags waving in the breeze. I ordered the poached eggs with crispy bacon and slow roasted tomato on regular bread. The whole meal was amazing, but the pesto sauce on the side was the absolute best I’ve ever had. I wish I’d asked for extra. On Marie’s recommendation, we each also purchased an almond croissant for later. When I remembered I had it in the glove compartment later that day, I just about flipped over my excitement.

The girls and I went to Red Herring for our Valentine’s Day dinner after a romantic sunset on Noordhoek beach. Though the service was ridiculously slow and a waiter for another table rudely took away our silverware to give it to someone else, the food made up for it. I kept seeing fish ‘n chips on so many menus in Cape Town that I decided to give it a shot (yes, this girl who constantly talks about how she doesn’t like “fish fish” except for tuna and is obsessed with shellfish instead, ordered “fish fish”). But like, anything covered in beer batter and fried is pretty delicious, so I was happy with my choice. The house red wasn’t so bad either. 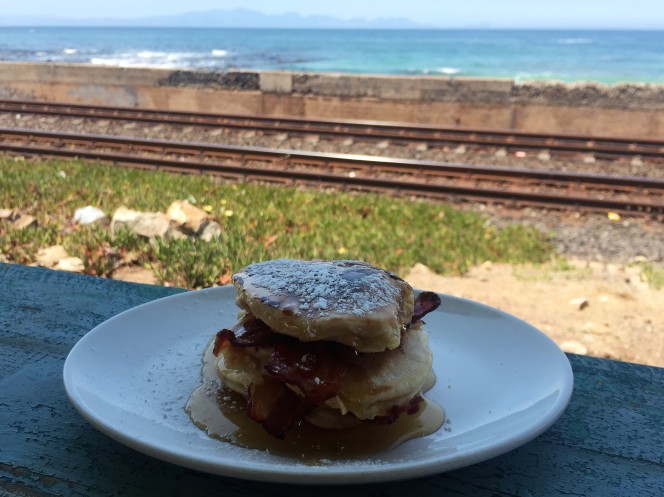 My final meal in Cape Town, aside from some cheese and crackers eaten on Signal Hill at sunset, was at Ohana in Kalk Bay. I took in the fresh air, the sea breeze, and the awesome view while devouring my banana pancakes with bacon. I couldn’t eat them all because the pancakes were very dense and the syrup they served needed to be lighter and more liquid to counteract that, but it was still a top ten in my mind and made me realize how much I was going to miss Cape Town when I left. Luckily, I am still adventuring and the food where I am has been pretty damn good as well.

BONUS! Below are two desserts that you shouldn’t miss – though you really should share the bunny chow with a friend or two. No need to share the ice cream.

If I don’t have ice cream every day, I just don’t feel like myself. We found some awesome artisan ice cream on Kloof Street at Unframed. We each sampled a few different unique flavors, including a basil lemon sorbet that was super basil-y and super lemon-y, but I already had my cone in mind of caramel and chocolate and I was the happiest.

Based on the recommendation of Ruth, who is opening up SeaBreeze above, I went for the “Bunny Chow” at Honest Chocolate, where we’d been before to walk around (they have a “secret” gin bar in the back garden). Bunny Chow is a traditional fast food meal in South Africa – a hollow loaf of bread with curry inside. Honest Chocolate Bunny Chow is a mini banana bread filled with chocolate spread, ice cream, & roasted nuts on the side. It’s too much for one person, especially if that person is me, and even more right after a grilled cheese sandwich from Culture Club but, oh, my, G is it delicious. Honest.

Do you have recommendations for other places to eat in Cape Town? Leave them in the comments!

Descriptions in italics are from the restaurants’ respective menus.