My love for shellfish stems from six summers working on the Jersey Shore in a seafood restaurant that was best known for the giant inflatable crab on its roof.  Since I’ve moved to New York, one of the things on my to-do list has been to find good seafood.  So far, nothing has called out to me too much.  Yes, I’ve had oysters at Jazz Standard, peeky-toe crab appetizers at ABC Kitchen, and seafood in pasta in a thousand different Italian places, but none of these really made me feel like it was home.  What I needed was a place where I could get really messy and cut up while cracking crabs open with my bare hands.  So when Kat invited me to the crab boil at Back Forty (12th Street and Avenue B) on Tuesday, how could I say no?

Back Forty does the crab boil every Tuesday during the summer.  You have to purchase tickets the prior Wednesday and there is nothing else available in the kitchen that night – including, to my dismay, garlic.  I really enjoy garlic butter with my lobster and with my crabs.  I don’t think this is a strange request, but I have struggled with it in two locations.  Back Forty, because the full kitchen wasn’t open, but don’t restaurants at least have a garlic powder shaker?  Isn’t that like Salt and Pepa?  The other time was in St. Thomas.  I should have known better than to order a lobster in a bar that’s in a parking lot, even if it is the best bar on the island.  But that is a long story which includes coloring in a waiter’s tattoo, being yelled at by the same waiter the next night, “I’ve been called a lot worse by a lot better”, and a broken rib. 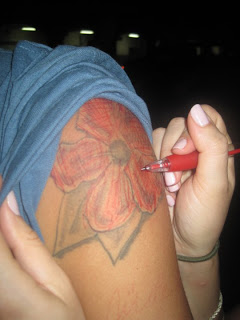 So anyway, the set up at Back Forty was corn bread, corn-on-the-cob, red potatoes, three buckets of crabs for the table, and blueberry cobbler.  Everything was delicious and there was plenty of food to go around.  We had four people in our party and we were seated next to two randos.

The only tool we got to help us out was a wooden mallet.  I probably could have used a tiny cocktail fork and a claw cracker, but I made do (and made a mess) with what I had.  One thing I thought was weird was being pulled out of the zone every few minutes by the waitresses making me pick up my empty shell parts and dump them into a bowl.  They should have just given us our own trash bowl a la Rachael Ray like the places in NJ do.  But all in all, this is a super fun experience whether on the bay on the Jersey Shore or in a dark bar on the Lower East Side.  So check it out because working hard to get the meat out is very satisfying.

I have heard rumblings about crab boils elsewhere in the city, like at my new favorite spot, Ditch Plains, so I will abso-tootly be checking out some more this summer.