I have been more than a little preoccupied this month, only writing two posts, but I have many reasons for this. I will be able to reveal all in next month’s recap, but until then, just know there are many changes happening and I am incredibly excited about what’s to come.

Posts I Wrote This Month:

Elsewhere online, I was featured on Miss Maps and Marvels as one of her Featured Female Travelers – check out the article here.

Early on in the month, I finally saw Kater’s new apartment in Brooklyn for a “barbecue” on her patio. There were lots of laughs, games, and cheese dip. I’m extremely envious at how adorable Kater’s apartment is, though she definitely deserves it. The more time I spend in Brooklyn, the more I think it might be the spot for my next apartment, whenever it becomes time for that. 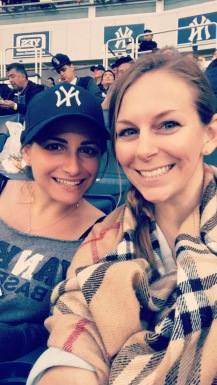 I met up with Nicole, Dave, and Mendy at a Yankee game. We Snapchatted a lot (follow me at MilesBehindMe10), snuck to the front row of our section (as you’re supposed to do at a Yankee game), and ate pretzels with cheese and tons of popcorn. Oh, and watched the game of course.

I went to two TravelMassive events this month – one sponsored by the Czech Tourism and one by the Beaches of Fort Myers and Sanibel. These events are such a great opportunity to learn about new destinations and catch up with my globetrotting friends. I was surprised to run into Lisa who had been on my Dominican Republic trip at the first one and I had about 1,000 questions for H-Bomb of H-Bomb’s Worldwide Karaoke who had just returned from North Korea at the second one.

Central Park parties are one of the best things to do during NYC summers and I had two this month – one engagement party and one birthday. There’s at least one more in my future this summer – if you’re nice to me maybe you’ll be invited.

My parents came to visit one Sunday which conveniently corresponded with my aunt’s and uncle’s visit to see my cousins. We all met up in Madison Square Park where one of my favorite events of the year – the Big Apple Barbecue – was being held. I’ve written about this twice (here & here) but attended even more often. We sat our parents on blankets under a tree while the kids went off to wait in lines for brisket, pulled pork sandwiches, and more.

I reconnected with two of my childhood friends while one was in town visiting from Pittsburgh – though one lives on the UES, I have only seen him when the other’s been around. It’s always fun seeing people who knew you way back when, and especially because you can gossip about everyone from elementary school – except for anyone who is reading this, of course.

I’ve written a lot about my first trip to the Dominican Republic with Fathom Travel – a new impact travel cruiseline. In March, I was fortunate to take a pilot trip to try Fathom’s impact activities out (planting trees, working with children on their English, & working with a women’s co-op to recycle paper). Two weeks ago, I also had the opportunity to try out the actual Fathom cruise from Miami and I brought my sister along for the ride. I didn’t know if I would like the cruise part but I was in it for the impact, and – oh, man – did it impact me. I was so grateful to be able to share the experience with my sister, Katie, Nedra – who I was on the pilot trip with, and all of the other fun and inspirational people we met on the trip.

This month was a whirlwind, but I’m not about to slow down right now. Let’s just say there are more miles ahead – 10,000 of them even.