My parents came to visit this weekend and I was so excited to spend my Saturday with them. I won’t be able to make it home for the rest of the month because of my charity event and two weddings and I was at my college reunion last weekend. It was so nice of them to drive up so that I didn’t have to travel two weekends in a row because I get overwhelmed with things like that easily. I’m working on it. So we celebrated Father’s Day a weekend early and did the item my dad suggested for my 28 Things list yesterday.

#3 Kayak on the Hudson 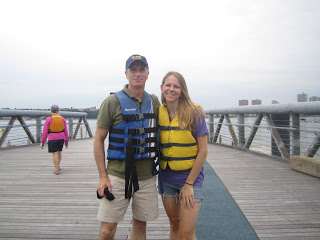 One of the first things I’m sure my dad would like for you to know about him is that he is a kayaking champion. He has the trophies and medals to prove it. I’ve always really liked going out in the boats with him and my sister so it made sense that my dad would chose kayaking for his 28 Things submission.

After my parents got to my apartment and we ate our Wawa hoagies (yes, with all the awesome food in NYC, we still eat Wawa hoagies each time they come up), we walked a few avenues over to Pier 96 on the west side and 56th Street. The New York City Downtown Boathouse offers free kayaking from May – October every weekend and weekday evenings. I’ve actually been wanting to try this out the last two summers but never took the plunge, so I was really looking forward to crossing this off my list. When I told people what I was doing this weekend though, they all made a face and warned me not to fall in. The Hudson doesn’t have the best reputation for cleanliness but it is definitely a lot cleaner than it used to be. Plus, my friend jumped in it a few summers ago and he has not grown any extra limbs yet, so I wasn’t too worried. 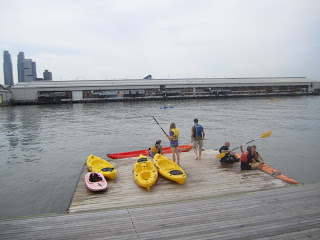 My mom decided to stay on the dock while my dad and I went out. We had to each acknowledge that we could swim, sign a waiver, and put on lifejackets. The women helping us out told us how to paddle, which my dad just smiled politely in response to as I tried really hard not to roll my eyes. We went out in a double kayak because I wanted to be able to chat while we were out there, but my mom said while we were out, the women were looking at us in awe saying that we knew what we were doing and should have taken singles out. 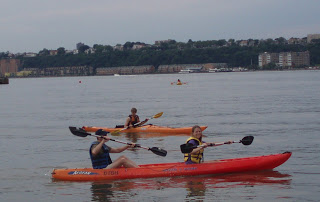 It was really fun and I definitely want to try and get out there again this season. The river was obviously a lot calmer than the ocean where I’ve kayaked most recently. Even in our local river, there are more waves, but we did catch a few from a Circle Line boat tour. We were probably out for a half hour – my arms were hurting because I am not awesome at keeping up a normal workout schedule and we didn’t want to leave Mom on the dock too long, but it was enough time to try it out.  It’s cool to add to the list of places I’ve been kayaking with my dad since that’s something special I really enjoy doing with him.

It started to rain almost right when we got out of the water. After going back to my apartment and changing, we took a cab down to Chelsea Market and walked around there for a while, shopped, listened to some musicians, and ate some ice cream. My parents thought the market was as cute as I do. 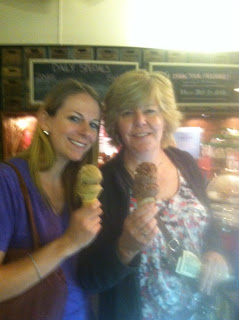 We then walked along the High Line and they were really impressed with it. They enjoyed the views, the flowers, and being above the city. Luckily the sun came out just in time for us to have a lovely stroll together. 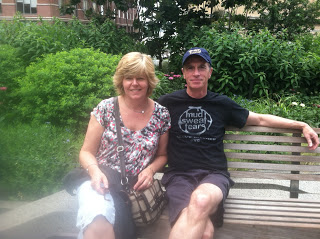 I will actually be writing more about the High Line this next week if everything goes as planned so stay tuned, folks! (Spoiler Alert: everything did go as planned!)