Okay, listen. I had all intentions of keeping up with my blog with my full-time job, but it’s difficult! Not only am I busy from 8 to 6:30 (that’s including my commute), but I have a social life again after being gone from the city for almost two years. Your girl is straight-up tired. AND here’s the (somewhat) sad truth. My days run into each other, my weeks run into each other, and my months run into each other. Not much changes day-to-day so it would have been a veritable copy/paste from one month’s recap to the next. So instead of being late with my April and May recaps where I also might have had to address that I turned 33, I present you with my SPRING recap, or rather some highlights from a very busy season, that started with a weekend with my family for Easter:

Sorry, it’s not as juicy as that headline indicates, but I am actually totally in love with my job (and the view from my office window, above). For almost a decade, I thought that a job was just something that allowed you to live a life that you love, but I didn’t think it necessarily had to be something you loved. And to feel this way about my job after not really having a job for almost two years is more than I could have ever asked for. I love that I get to be creative, write, and talk about travel all day long. I love the work environment where my coworkers already feel a little bit like family. I love the happy hours, the inside jokes, and that I’ve already been to a work wedding. I love how much I’m learning and that I can actually see the results of what I’ve done.

Again, not quite as juicy as I’m indicating, but I saw so many people this spring who I hadn’t seen in a very long time. Sure, I’m talking up my new coworkers quite a bit, but my old coworkers (well, most of them) weren’t so bad either. I went to two happy hours where we celebrated three of my good friends leaving the team for happier pastures. I spent more time with Kristyn than I have since I was living in Chicago last May, twice in NYC and then over a weekend in Chicago (more on that later). Prachi and I enjoyed a meal and a catch-up at Divya’s Kitchen, where we chatted for longer than we had since I was living in Bangalore.

Most needed was a reunion with each of my closest friends from home when I was in college. For multiple summers in a row, I went to the beach with these women, worked with these women, partied with these women, and slept in the same beds as these women, just to wake up and do it all over again the next day. But I hadn’t seen one since her wedding in December, another since her wedding in London last February, and another for almost THREE YEARS. The stars aligned and I randomly was able to meet up with each of them one-on-one during the same two-week period. Though we lived the same lives for quite some time altogether, their current lives are, admittedly, all vastly different than mine, but, man, is it good to see them.

Realizing “How Lucky We Are to be Alive Right Now”

This section is going to make me sound the nerdiest I’ve been since the photo in this post, but part of being an adult is NOT CARING ONE BIT. We got tickets to see Hamilton way back in AUGUST when I was in the Finger Lakes and finally on April 22, our day had come. I purposely hadn’t listened to any of the music beforehand, but I had purposely taken an Alexander Hamilton tour from Urban Adventures, read 1/3 of the book that it’s based on (it’s super long guys, I’m trying again this summer), and had had many conversations with my family members about Hamilton, Burr, the Revolutionary War, the founding of our country, and how it affects so much of what’s happening today, so I felt invested and prepared.

BUT I WASN’T PREPARED. Because it was the best performance I’d ever seen or heard in my life. And you are talking to a woman who has seen Justin Timberlake from feet away. Chills. Tears. Laughter. Love. Sitting at the edge of my seat, literally (and I could because we were in the back row). I immediately downloaded the music and it’s all I’ve been listening to since. It’s Hamilton everything now-a-days, whether my cousins and I are driving upstate or to NJ, my sister and I are driving home, or I’m sitting with my headphones on with my coworkers next to me singing every song out loud to a crowded train after a wedding (that had a Hamilton-themed father-of-the-groom speech!).

And because I have the best sister in the world, I am going to see Hamilton again in October—with our parents this time. The show also inspired me to see more shows now that I’m back in the city. I found a $25 ticket to Frozen one random night during a thunderstorm when no one Elsa (get it?) wanted to go and took myself out. There will be more of these nights in the future.

Showing Off My New Neighborhood 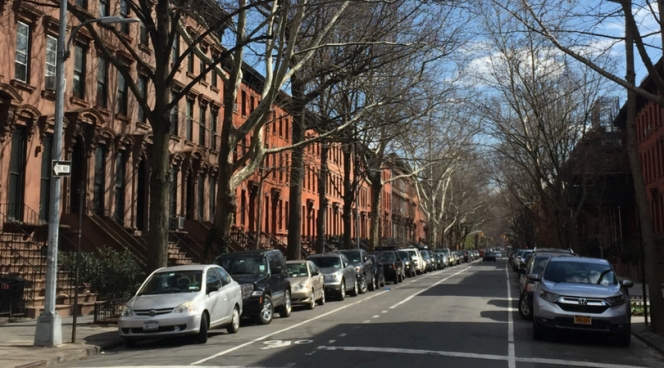 I hosted a cousins’ brunch for those in the area, fitting 12 adults and 2 kids in my new apartment for a super fun day that included a trip to the park. For Mother’s Day because I couldn’t handle traveling for three weekends in a row, my parents, sister, and the dog came up for a nice rainy day that became sunny, and for the first time I didn’t put them to work on various tasks in my apartment. Jenna, George, and Traci came out for the first nice Friday and we had a lovely time at my neighborhood pub. Caitlin, Tyler, and Jackson (one of my favorite pups) came to visit for an afternoon which also included Caitlin’s sister Hailey who is my new neighbor!

I hope to host more brunches this summer and fall. Let me know if you’re ever in the area or just want to explore Brooklyn a bit. I am always down. Unless I am away. 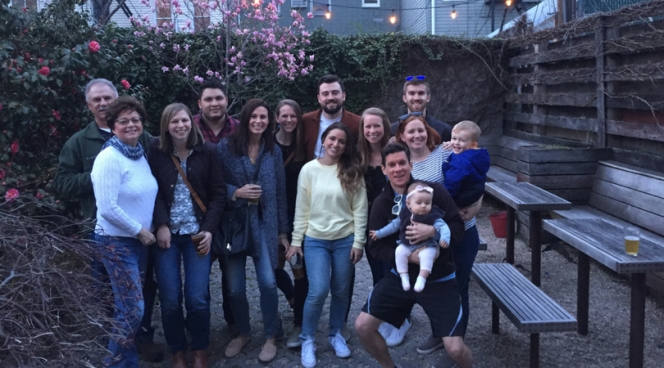 While we have known for a while that my cousin Jake was trying to move to Australia with work, the reality was tough. I’m so glad that I overlapped with him and his GF Lauren in Brooklyn for a few months, but I’m also sad that they’re gone because those few months were SO MUCH FUN. I had almost the whole crew over for that frousins’ brunch, then the 4 BK locals sat at a brewery playing rummy for four hours while we waited for our table at one of the most popular pizza places in the city. But that was just one of the fun times.

We had an official going-away party in the backyard of a bar in Brooklyn, traveled to Beacon, and went to countless other dinners together, all while I was putting off having to say goodbye. On their last night in town, I went to collect all of the things they didn’t want to bring with them to Sydney. So instead of saying goodbye, which I can never find words for (though I can always find tears), I said hello to a fan, hangers, a crockpot, games, and postage stamps. In the fall I will have a new cousin in Brooklyn, Paul, who is going to college here. My sister tells me I’m too old to go to college parties (I beg to differ), but Christie, Emmy, and I are going to scoop him up for dinner once in a while.

Not only did I have to say goodbye to Jake and Lauren, I had to say goodbye to Davesh, a good friend and former coworker who I visited in Amsterdam, traveled to Belgium with, and met up with SO RANDOMLY in Dubrovnik during my most recent trip abroad. He’s moved to Kuala Lumpur, a place that I’ve already conquered, so we will have to pick a new spot to reunite.

While I love being settled again, living in Brooklyn, and having a routine, I also am very cognizant of my limited vacation days and, well, limited funds to travel with as I build my savings back up. I know what you’re all thinking, that I’ve traveled so much in the last two years that I should shut the heck up about not traveling, but it’s tough to explain how traveling fills up my soul with the most wonderful things, how much I crave it, and how I feel antsy without it.

But! I have been on a few trips lately. I spent a weekend on Amelia Island in Florida, celebrating for a wedding of two of my favorite people, George and Traci; a weekend on Long Beach Island, celebrating my cousin Emily at her bachelorette party; a weekend in Chicago, celebrating my friend Kat at her bachelorette party. And while I of course had a blast during each of these weekends, and yes, I was technically elsewhere, it wasn’t traveling in the way that fills my soul. These weekends were all organized by someone else—I didn’t get to research, explore, chat up the locals, eat the food that I wanted, or spend my time (or $) in the way that I wanted. I tried not to make this sound selfish because obviously these weekends were meant to celebrate others and not me, but maybe the problem is just that.

So, to fill my selfish soul, I’ve been traveling a bit locally. I’ve been exploring as much of Brooklyn as I can and have made daytrips to Beacon and Belmont Park. I went back home for the first time since moving back to NY for a wonderful Memorial Day Weekend, and I’ll be home again for a number of summer weekends in July and August. I’m hoping to travel a little bit for work in August and September. And I’m visiting two new U.S. National Parks with my family in September. So I think I will get through this. In 2019, I will have double the vacation days and I already have a few exciting trips on the horizon. I just need to get there.

My commute and having no cable has allowed me to continue reading as much as I was in January, February, and March. Spending my free-time reading is much better for my mind and soul than scrolling through Instagram and watching the Real Housewives of NYC, although I am also making time for that. Not only did I read the following books this spring—making my total for the year 46 so far—I started a book club with a group of friends. In April we read Everyone Is Watching and in June, Eleanor Oliphant Is Completely Fine. Despite no one having been in a book club before, both meetings have been successful and I’m hoping we continue! Here’s everything I read this spring:

Want to read more? Join Book of the Month Club (use this link for a free book!), follow me on Goodreads for inspiration, and, if you’re in NYC, message me about joining our book club!

The summer, my first in NYC since 2015! Also, my first 4th of July in the city because of its (dumb) position in the middle of the week during a year that I have limited vacation days. Being outside. Taylor Swift in concert. A family wedding. Beach weekends at home.

Summer Erin is the happiest Erin.